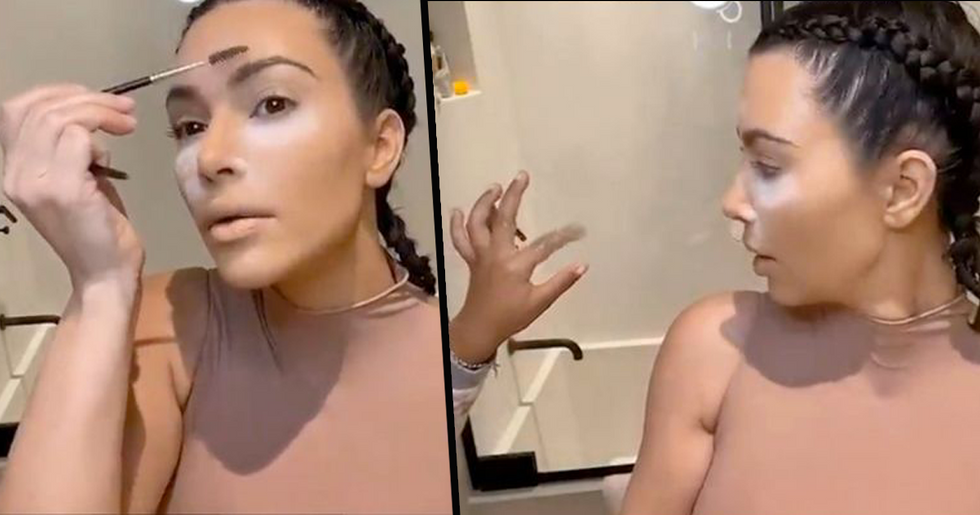 While in lockdown, reality star and makeup mogul, Kim Kardashian, has been keeping herself busy with her usual Instagram tutorials.

But being cooped up in the house with 4 kids is bound to make things a little difficult, and fans were delighted when her eldest child, North, hilariously interrupted one of her tutorials.

Keep scrolling for the full story, and to see the amusing video for yourself...

The Kardashians are an unstoppable media force.

The Kardashian women are the stars of one of the most successful realities shows of all time, and each of the sisters has a massive influence on social media.

The second eldest of the clan, and arguably the one who started it all, Kim Kardashian.

And her lockdown antics have certainly fared no better.

Millions of people around the world are now self-isolating in a desperate bid to prevent the spread of the virus...

And this includes the Kardashian family.

Kim is currently self-isolating with her family...

Her husband, Kanye, and their 4 children, North, Saint, Chicago, and Psalm.

And, last month, Kim took to her Instagram Stories to give her fans a glimpse into her current isolation situation.

And it turns out she's still making the effort to catch up with her mom, Kris.

Kim went on to explain what she and her "momager" had been up to.

She shared that she has been exercising regularly...

As has Kris. "I think it really made me feel better to get outside a little bit today. It made such a difference in my attitude, my energy, my mood, and it made me feel cheerful to see Kim and I think if you can guys, just try and get outside for a few minutes," her mom piped in.

For most of the lockdown, Kim has been spending time thinking of ways to entertain her children...

Because, even for someone as rich and famous as Kim, handling 4 cooped up kids will never be an easy task.

The reality star has also been keeping herself occupied with her makeup.

I'd give anything for Kim K's makeup stash right now...

And yesterday, the star decided to share one of her many makeup regimes...

In the form of a makeup tutorial. Because she has nothing better to do, right?

But the tutorial, which weighed in at around 8 minutes, was spectacularly gatecrashed...

By none other than her eldest child, 6-year-old North West.

At the start of her video, Kim could be seen standing all fresh-faced in her bathroom.

"Hey guys, I am super bored and I am in my guest bathroom right now, so I'm going to do a little makeup tutorial."

She talks through the products she is using, her favorites, and her most-used techniques.

But then, North suddenly appears.

In the bottom corner, North can be seen clamoring at her mom as she tries to apply her eyebrows.

Who reels back quickly in an attempt to avoid her fresh makeup being smudged.

North then asks if she can wash her hands...

In which Kim politely asks her to use the other bathroom.

"I'm hiding in the guestroom guys."

"I'm hiding in the guestroom because my kids will not leave me alone." Most of us can relate, Kim.

You can watch the full tutorial here.

Keep interrupting your mom, North. It's very entertaining for the rest of us. For more on Kardashian dramas, keep scrolling to read about the latest on their ongoing feud with Taylor Swift...