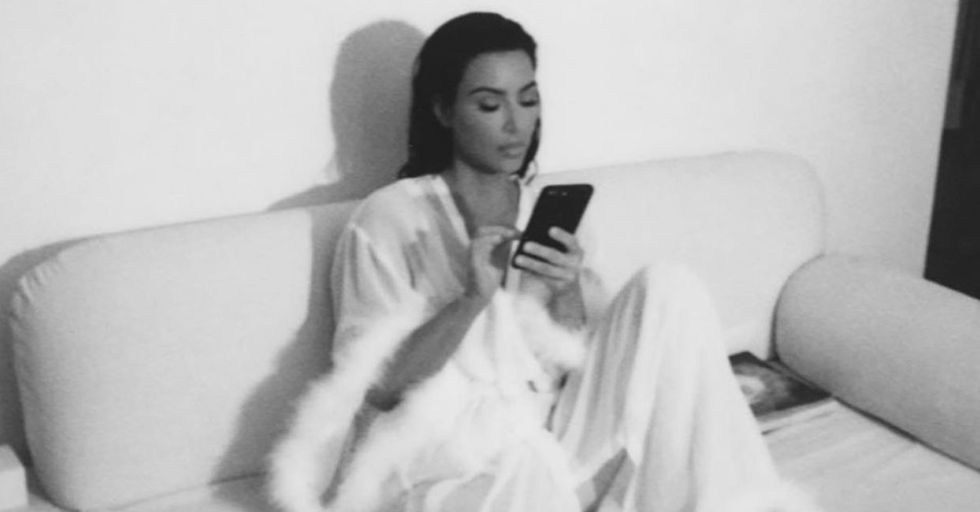 Kim Kardashian holds an incredible amount of influence on social media platforms - she's basically the original influencer. So when she tweets about a brand or an issue, it gets attention. That's why she earns at least six figures per sponsored post on Instagram.

Recently, she tweeted about a vague issue with Jack in the Box, inspiring jokes and commentary from many areas of the internet. Fast food brands, in particular, chimed in with their digs at both Kardashian and Jack in the Box.

Although the situation seems to be handled, the tweets live on. Read on to see the very best of them.

Kim Kardashian is the queen of social media.

Paris Hilton may have "created" Kim Kardashian, but she's completely changed the way that celebrities use social media to control their narrative. And she's done it better than anyone for over 10 years.

She has a massive amount of followers on Instagram.

She's the sixth most followed person on Instagram, beating even Beyonce. And once, for three-hundred and ninety-three days, to be exact, she had the most liked photo on the site. It was, of course, of her wedding kiss with Kanye West.

She also has a huge number of Twitter followers.

She has over sixty million followers on Twitter, ranking among the most-followed accounts. However, somewhat surprisingly, Katy Perry is the single most followed person on Twitter, edging out Barack Obama.

In 2014, Kim Kardashian covered Paper Magazine, and it received more individual clicks than their entire site typically does in a year.

Last week, Kim wielded her internet prowess in the direction of Jack in the Box.

Many facets of this post got attention: there were no specifics, no tag for JINTB, and, finally, "Pronto!". What could they have done? And does Kim really eat fast food?

Her post was commented upon and retweeted all day. Comedians and brands chimed in and speculated. What did Jack in the Box do? Kim Kardashian eats there? Why did she use the word "pronto?!"

Even half an onion in a bag responded.

@KimKardashian Thank you, Kim. Finally someone is calling them out for all of those innocent onions they’ve slaughtered.
— Half An Onion (@Half An Onion)1558387119.0

This Twitter account was started with the goal of getting more followers than Donald Trump, but is run by someone with a great sense of humor, specifically about onions. Funnily enough, someone else created an account on Instagram of an egg to get more likes than Kylie Jenner and succeeded!

Kim needs to speak to a manager!

"Karen" has become code for white women demanding to speak to a manager. She's one Kate Gosselin haircut away from going full Karen.

Some people thought that Kim was abusing her power.

@KimKardashian “I’m not going to put you on blast but instead tweet I have a complaint about your company to make i… https://t.co/CaFojhpXQU
— Tony Posnanski (@Tony Posnanski)1558383196.0

Something lost in this complaint is that Jack in the Box is a giant corporation. They're going to be fine. They don't need the internet protection of an amateur MMA fighter.

Kim Kardashian shining a light on you is almost never a bad thing.

She's giving Jack in the Box an opportunity for a massive PR bump. She has millions of followers, many of whom probably haven't thought about Jack in the Box for a while. But, now they are. JITB just has to play their cards right.

Even though they were not tagged, Jack in the Box found the tweet.

I guess when Kim Kardashian's tweet about you goes viral, you find out about it, even if it's not in your mentions. The eagerness with which they said they can't DM her gives me anxiety.

While they were working things out, other fast food brands jumped in to comment on the whole thing.

Brands on Twitter can't just promote their products anymore. They are expected to participate in Internet Culture to be cool.

Carl's Jr. made the choice to go biblical.

It's a cute tweet, and maybe a good rule, but it's a joke structure that's a little tired. After Destiny's Child's "Writing's on the Wall" and all of the commandments therein, maybe we should let it rest. Thou Shalt Say My Name.

It's a great day to be Jack. They got more attention in one day than they usually do in months. Much like Paper Magazine before them, the Kim Kardashian bump is real (even if surgically enhanced).

Are they confused as to whether it's really steak? Why are they stuttering on one ingredient in their own name? Something about it feels classist and not entirely funny.

Their tweet feels most successful, probably because their avatar is a little girl. Something about snark coming out of the mouth of a child is funnier than an insecure steak.

Sharon Osborne hosted a show called Charm School on VH1 a million years ago, and the idea of Kim Kardashian acting as a principal in a school for errant influencers and brands sounds delightful.

The use of the emoji proves that this social media manager is fluent in Internet. It's funny and easy and gave me an instant craving for Shake Shack.

This super small pizza place popped in with Fresh Prince.

Will Smith gifs from this era are always welcome in response to anything. Similar to responding with an emoji, it's clean and easy and now I want pizza.

After all of the backlash, KKW herself responded.

The post is not well written. She makes it sounds like she was upset that she wasn't recognized at Jack in the Box, but there's no way that's the situation. She needed a copy editor. Where's Kris?!

@KimKardashian Sounds like you’re handling everything with great aplomb, Kim. Much like the time my cousin Shane th… https://t.co/u2HwVauoRw
— Coach Letterman (@Coach Letterman)1558385642.0

The way that she worded this makes it sound like she's making a mountain out of a molehill (or, burning down an establishment when you're unhappy with an order...). A bit out of touch.

Maybe this was all attention seeking, but having your timeline flooded with comments about Kim Kardashian's Jack in the Box complaining is grating.

For some people, this is the most relatable that Kim has ever been. Most of her show involves her and her sisters getting their hair and makeup done so that they can go sit on a giant couch at one of their houses. It's one of the most aspirational shows. Maybe they should go to Jack in the Box on the show, in jeans that don't really fit and eat something resembling a hamburger, more often.

After all of the back and forth, the situation was resolved.

@KimKardashian Thanks, Kim, for talking with us today. We are taking actions to ensure that everyone has positive e… https://t.co/YiP6OYUlF5
— Jack in the Box (@Jack in the Box)1558400665.0

People are begging for someone, anyone, to spill the tea on what Kim witnessed, but, so far, everyone is keeping quiet. Except for Jack in the Box's mentions, which are going to require many, many interns to sort through.

After Kim's final tweet, not even threaded with the rest of the exchange, it seems as though that's the last word on the matter. We may never know the truth.

Whenever the Kardashians go viral over a brand, it's exhausting.

After Kim's last tweet, someone tweeted at Checker's & Rally's.

Their response put everyone else, and their clever Twitter digs, to shame. Like when Kourtney Kardashian reminded Kim that people are dying when she was freaking out about her earrings.

People even used the thread to call out other brands.

I hope this person gets a resolution to her Priceline vs. Hotels.com snafu!

Maybe she should go into customer service.

Anything that she brings negative attention to changes rapidly. Even though she's been mocked for going into law, maybe she's a person that could really change things. And, not just hamburger things.

Jack in the Box is the real winner here.

They got attention from Kim, and, therefore, attention from millions. They handled the situation well and got a tagged thank you note. Don't worry, Colbert, Jack in the Box will be alright.