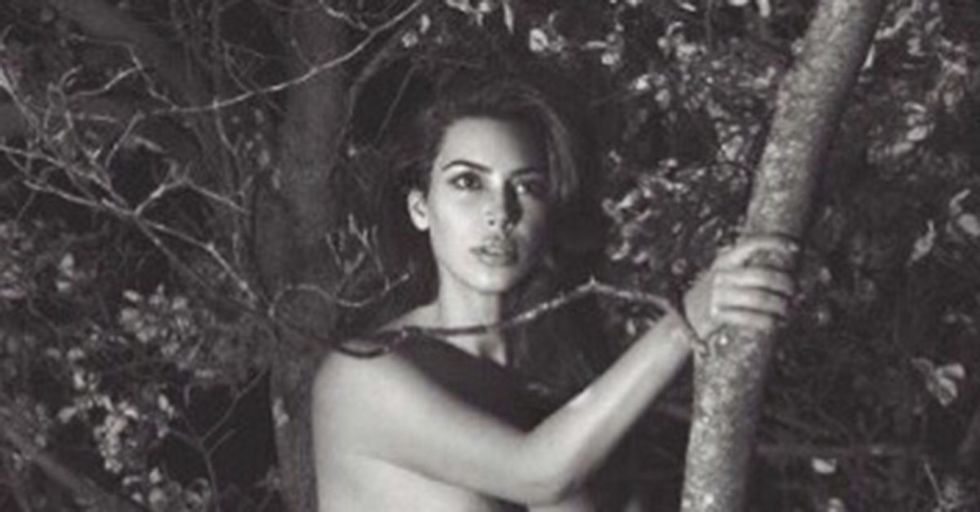 Kim Kardashian Is Posing in a Tree… Wearing Only Boots

Kim Kardashian has managed to stir up two controversies in less than 48 hours.

First, people were up in arms about her choice to use a surrogate for her third child with rapper husband, Kanye West.

We'll let you see for yourself.

If you're looking for Kim K's most scandalous development on Twitter, it's been pulled. (Don't worry, we got it anyway.)

So what would be so upsetting for the scandal-obsessed media darling that she would actually SHY AWAY from controversy? (Well, on Twitter at least...)

That ran a little risque.

Some people have given her their support, whereas others...don't. Here's the pro-Kim side tweeting their support. Support of what, exactly, remains to be seen. It's a naked photo, but I guess that Kim supporters are a vocal lot.

Then there's the negative.

(Sure, that tweet reveals it's a naked photo shoot, but you knew that anyway.)

What makes the controversy a little tricky is that it came mere hours before she announced she's expecting her third kid via a surrogate.

I guess she was showing off her pregnancy-free body? You be the judge when you see the pic on the next page.

BOOM! What do you think about THAT?

You actually don't have to feel anyway, but it seems like everyone else is a little troubled by Kim K. naked in a tree hours before announcing her baby #3 is on the way.

This chick's asking the tough questions.

Yeah, Kim. What's up with THAT?

I mean, is this REALLY strange behavior from Kim, possibly the most attention-craving person on the entire planet?

Someone's always going to be the buzzkill.

It's not HER fault that millions of people tend to focus on her naked in a tree rather than the world's problems. Maybe they want to turn off their brains a little and think about pop culture.

Did this take things to a new level of desperation?

The Ryan Reynolds facepalm GIF suggests...maybe? But, is there more going on here?

Nope. It wouldn't appear people are reading more into this than just "Kim will be Kim."

I mean, did you expect her NOT to climb naked in a tree hours before her child announcement? If you did... sorry.

I guess everyone's having kind of a tough week. Maybe that's why people seem more exasperated about this than usual.

It's Labor Day week, so maybe we're trying to all get five days of work done in 80% of the time.

This is a good point.

Still, I'm not sure this is the weirdest thing Kim's neighbors have been exposed to over the years.

I mean, Kanye lives with her.

The neighbors are probably just like "Oh, thank God. It's just Kim naked in a tree. Kanye's nowhere to be found."

Maybe this is just her way of announcing to the world she's expecting a kid?

Sure, it makes no sense, but do you have a better explanation for naked Kim Kardashian in a tree?