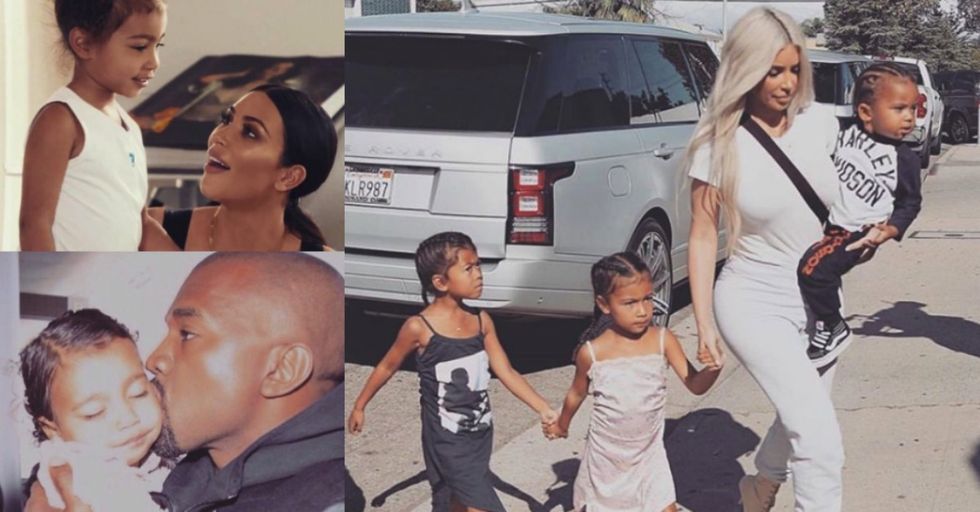 If you had a baby with the help of a surrogate, would you tell her who you were? It's pretty safe to assume that you would. But when your net worth is about 175 million dollars, you might do things a little differently.

You would probably do a lot of things differently, to be honest.

Kim Kardashian West and Kanye are the parents of two cute kids.

Their kids, Saint and North, are four and one respectively. They're expecting a third kid, but this time they'll be getting the help of a surrogate.

Their choice to use a surrogate drew criticism from people online.

When she and Kanye announced that they were having a third child, some people refused to call them 'pregnant' since a surrogate was having the baby. However, many fans can relate to the struggle Kim and Kanye went through with fertility issues and are happy that the couple is expecting another kid.

As most things Kardashian-related do, Kim's choices regarding her baby shower stirred up drama.

Kim had a cherry-blossom-laden party where she revealed that she and Kanye would be having a baby girl. But she didn't invite a person who was crucial to the pregnancy: the surrogate mom. She said that she hadn't talked to her kids yet about what was happening and didn't want to confuse them before she tried to explain the situation to them separately.

What's more, the mother of her future child didn't know that Kim and Kanye would be the kid's parents.

"You could do it totally anonymously," Kim said.

"You could go that route." She went deeper into why she was apprehensive about revealing her name to the anonymous surrogate.

She was worried that the woman might not be a fan, or that she would be too big of a fan, which would make it weird.

"And I just felt like, whoever is carrying my baby, what if they weren’t a fan of me or my husband? What if they didn’t want to be carrying our baby?" Kim asked. She explained, "I wanted to give them that choice, and be proud and on the same page. I wanted a relationship with her."

Kim did eventually end up telling the surrogate who she was.

She said that the woman was, "really excited. She was someone who had watched the show – not like a super fan, that it would have been uncomfortable – but she’d seen my struggle and seen how open I was about it, so she was really proud to do it."

Kim was pleased with how it worked out and ended up introducing her to the family.

The surrogate mom met the Kardashian family the day of the baby shower. "She’s the perfect person to do this for my family. She’s great. She’s been amazing," Kim said.

Kim and Kanye's surrogate is remaining anonymous, but we do know a couple of things about her.

Yahoo news said that the person is an African American woman in her twenties who is married with two sons of her own. We're not sure if the Kardashians will introduce her to their kids after they explain the situation to them.

Kim hasn't explained the entire situation to the kids yet, but they do know that they're getting a new sibling.

She said that she keeps trying to remind North that when she comes into her room at night, she might not be there because she might be feeding the new baby. North seems okay with that idea, but that Kim won't really know for sure how she'll react until it really happens.