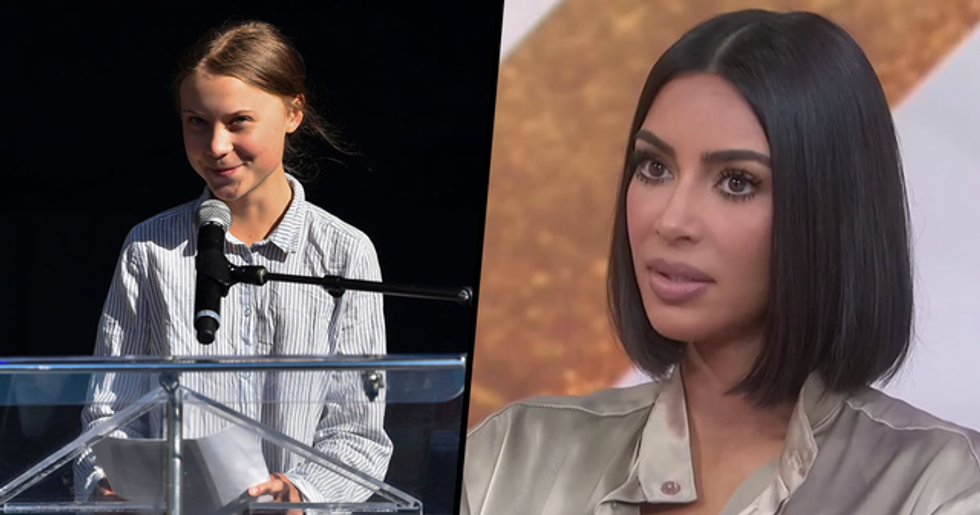 The sixteen-year-old's commitment to helping to change to our planet in a bid to tackle climate change is truly inspiring, and she has received an overwhelming amount of support from millions of people all over the world.

And now, she has the support of one incredibly influential figure... The one and only Kim Kardashian. The reality star has publicly praised the teen, and has even said that she would love to have dinner with the activist.

The teen's supporters now include some very famous faces...

Because reality TV star, Kim Kardashian-West, has now expressed her support for Greta and her cause.

Kim K isn't exactly the most prominent climate change activist in the world, is she?

But she is seemingly more into the cause then she lets on...

Behind all the makeup, designer clothes, private jets, and general vapid Kardashian gossip, Kim is apparently quite interested in the fight against climate change.

Because she has recently expressed her support for Greta Thunberg.

She praised Greta for her bravery.

“She is such an amazing young girl," Kardashian West continued, “and so brave and courageous to stand up to these grown-ups that can be really scary and for her to be so open and honest is exactly what we need."

She added that she would love for her 4 children to meet Greta.

And, when asked what she would say to Thunberg if they were ever to have dinner together, Kardashian West said she would love to speak to her parents "and see how they encouraged her." “Did she always have that in her? How do they support her in being who she wants to be knowing that speaking on a big platform invites a lot of different opinions and personalities and how do they manage that?"

And she has acknowledged that climate change is a real issue.

Yeah, and all your private jets aren't helping towards it, Kim...

Obviously, not everyone is okay with the idea of the two women having a chin wag...

With many Twitter users pointing out that the reality star has absolutely nothing in common with young Greta.

Though some are hopeful...

@PageSix Greta is a vegan, who only wears second hand clothing and does everything she possibly can to not take wha… https://t.co/10ALii3rjN
— SikhPeace (@SikhPeace)1570558414.0

And point out that Greta may be able to teach the Kardashians a thing or two.

But the resounding opinion isn't a great one...

Most people just think that Kim is doing all of this purely to get herself back into the spotlight. Because God forbid anyone else is the center of attention for one minute! However, if this helps towards the fight against climate change, who cares what her motives are?