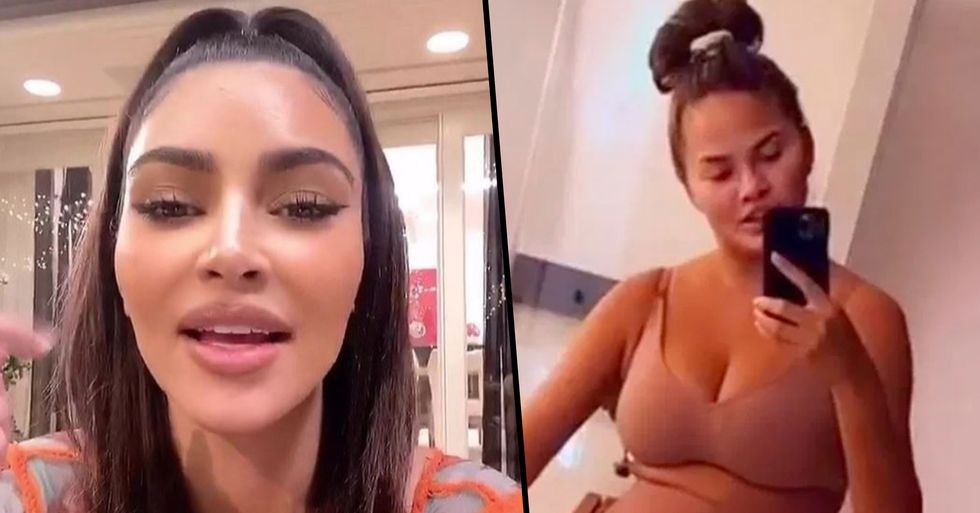 Kim Kardashian has finally responded to the backlash she has received over the SKIMS maternity shapewear line after Chrissy Teigen got involved.

Keep on reading to see what she said to defend her company...

Since the announcement of the end of Keeping Up With The Kardashians, the world-famous family have been keeping themselves very busy...

And Kim Kardashian has been actively promoting her bodywear range, SKIMS.

Kim has been receiving a lot of backlash in regard to the new SKIMS maternity range.

And when pregnant Chrissy Teigen posted a promotional video for the maternity range...

The criticism got even worse... resulting in Kim finally addressing the anger herself.

Now, the Kardashian-Jenner family are no strangers to controversy.

Although, with plenty of seasons of KUWTK under their belt and more money than most of us can imagine, these women are (mostly) thriving.

They’re bound to hit a few bumps in the road!

But Kim seems to be the one who ruffles the most feathers.

The queen of them all, Kim Kardashian, is arguably the most famous Kardashian sister.

In recent years, Kim has ventured away from her reality TV beginnings.

But despite the good that she has been trying to do, Kim frequently seems to get on the wrong side of fans.

It all started when the star tweeted about her new campaign for her shapewear line SKIMS.

Kim took to Instagram over the weekend to promote the SKIMS maternity range.

She wrote: "What you’ve been waiting for: @SKIMS Maternity is coming soon! Introducing Maternity Solutionwear™ that offers the best in comfort and support for your changing body during and after pregnancy."

And how the underwear would offer "comfort and support for your changing body during and after pregnancy" and would be available in various colors and sizes.

Chrissy Teigen, who is pregnant with her third child, took to Instagram to promote Kim's new venture.

"I merely want to wear underwear that's pretty, that I feel good in, that's soft, that's comfortable, that stretches nicely over my belly, and that my p**** doesn't eat," Chrissy said in the video while modeling the maternity wear.

Wrong! Since Chrissy posted the video, Kim has been met with a lot of anger in regard to the SKIMS maternity range and it's safe to say that people aren't impressed.

Many feel that Kim's range is attempting to "shape" pregnant bodies...

And why should a pregnant body be changed at all?

This can't be good for a pregnant woman's well-being and self-esteem?

@KimKardashian @skims I’m sure that’s the one thing pregnant women need above all! Being pressed to a slimmer figure
— Sara Moh (@Sara Moh)1599932143.0

There's no such thing as a slim pregnant stomach, people!

Of course, it didn't take long for Jameela Jamil to address the issue.

She pointed out that pregnant women should "be allowed to be pregnant and get bigger" without feeling embarrassed or self-conscious of their bodies.

"I wish we could just normalize just focusing on the inside of a pregnant body, not the outside," Jameela continued in an Instagram caption.

"You don't need your shape corrected or hidden. You just need to try and ride with this miracle and do your best to be as happy/comfortable as is possible within your circumstances."

Following the criticism, Chrissy Teigen decided to speak out and defend Kim's brand.

on the controversy that is pregnancy shapewear: it’s not to be smaller. these brands aren’t pressuring us to be sma… https://t.co/JX0uq2YbPg
— chrissy teigen (@chrissy teigen)1600024896.0

"On the controversy that is pregnancy shapewear: it’s not to be smaller. These brands aren’t pressuring us to be smaller. Thanks for looking out for us everyone but we’re good!" she wrote sarcastically.

Chrissy then agreed with a fan who said that pregnancy shapewear has offered them support and pain relief...

@natalaame if anything, pregnant people hate hearing "oh you're so small!" because it kind of implies our baby isn'… https://t.co/oetbUb0yWX
— chrissy teigen (@chrissy teigen)1600025561.0

Adding that being told you look small when you're pregnant isn't actually a compliment.

But despite Chrissy's kind words...

The criticism just continued to flood in.

But now, Kim has decided to address the negativity.

She took to Twitter to hit back at the haters, firstly by saying that "SKIMS maternity line is not to slim but to support."

She then explained what materials had been used in some of the garments...

And how they would help with discomfort and pain during and after pregnancy.

She finished by explaining how proud she is to "provide a solution that will provide comfort and support during the times that we all need it most."

Do you feel that Kim's new maternity range is just a way of slimming down pregnant bodies?

Or do you agree with Chrissy and feel that the criticism is totally unnecessary? Keep on scrolling to see the best moments of KUWTK over the last decade...