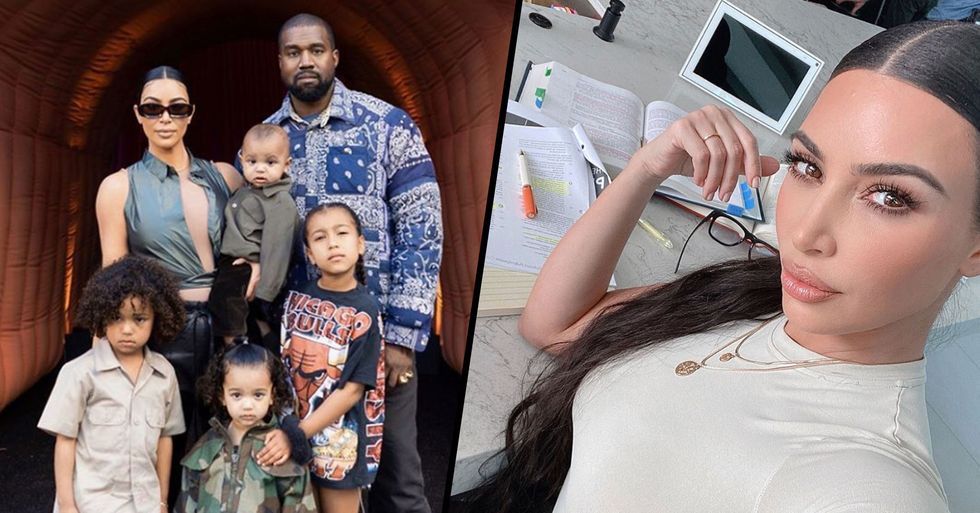 Following in the footsteps of younger sister Kylie, Kim has created her own beauty line and, in quite a turn of events, the mom-of-4 is becoming a lawyer.

Now she has revealed what exactly inspired her to pursue a career in law, and it's much more personal than she's ever admitted before...

The star announced she was entering the legal realm early last year.

She revealed the news in Vogue's May 2019 issue, announcing that she is training to become a criminal justice lawyer, and is now being mentored by 2 lawyers, Jessica Jackson, and Erin Haney.

Taking to Instagram last year, the star wrote: "Last year, I registered with the California State Bar to study law. For the next 4 years, a minimum of 18 hours a week is required, I will take written and multiple-choice tests monthly." "For anyone assuming this is the easy way out, it’s not. My weekends are spent away from my kids while I read and study. I work all day, put my kids to bed and spend my nights studying. There are times I feel overwhelmed and when I feel like I can’t do it but I get the pep talks I need from the people around me supporting me."

"I’ve seen some comments from people who are saying it’s my privilege or my money that got me here, but that’s not the case. One person actually said I should “stay in my lane." I want people to understand that there is nothing that should limit your pursuit of your dreams and the accomplishment of new goals." "You can create your own lanes, just as I am. The state bar doesn’t care who you are. This option is available to anyone who’s [sic] state allows it. It’s true I did not finish college. You need 60 college credits (I had 75) to take part in “reading the law", which is an in-office law school being apprenticed by lawyers," she added.

Kim has opened up about her future law career further in the past...

She went on to explain her plans for her own future law firm...

The reality TV mogul revealed that she would hire ex-inmates exclusively for her firm. "I would have the best firm of formally incarcerated people!"

Earlier this month, Kim revealed she had successfully passed her first year.

With plans to "give up being Kim K" in ten years to start up her own firm.

But, this week, the star has revealed exactly what inspired her to take up a career in law.

And it's much more personal than she's ever amditted before...

Speaking to CR Fashion Book, the star revealed that raising "4 black kids" in America has played a huge part in perusing a law career.

"I'm raising four black kids in this society, and our system is so discriminatory against black and brown people," Kim said.

"I want to do as much as I can to make their lives easier."

"I never knew much about the system until I started to dig in."

"And once I learned and saw how many things were wrong, I really couldn't stop."

Over the past few years, Kim admitted that her priorities have changed...

And that she now feels a "duty" to be a role model to her 4 children.

"My evolution on this is probably some combination of growing up, getting married, having kids, and my life being so different than it was when I was starting out," she explained.

"Now, I feel like I have a duty to myself and to my children more than the public and I want to be a good role model for my kids."

Good on her for wanting to make a difference.

We can't wait to see where her law journey takes her next. Want more Kardashian-related news? Keep scrolling to read about Khloe Kardashian's "unrecognizable" transformation.