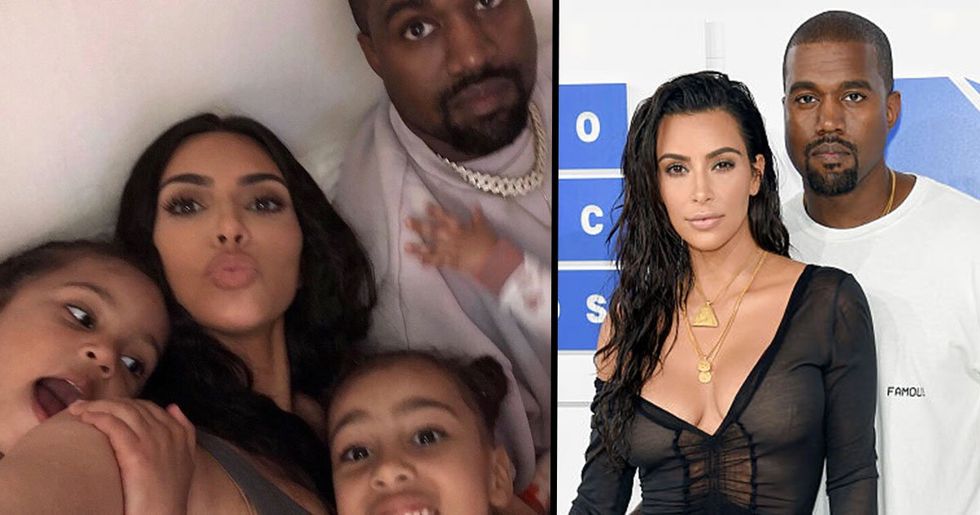 Kim Kardashian is not one to keep things private, but that isn't necessarily a rule that she extends to her children. We've been dying to see a picture of Kim and Kanye's new baby and we've finally been blessed with the pic. They kept us waiting, but it was definitely worth it.

Kim now shares four children with her husband, Kanye West; their fourth child, Psalm, was born via surrogate four weeks ago. Since Psalm's birth we, the general public, have patiently waited for a glimpse of the new addition to the Kardashian-West brood.

Ladies and gentlemen, the wait is over.

The Kardashian-West clan has grown!

With four young children under their arms, it's a wonder that parents, Kim and Kanye, have time to focus on their respective empires.

Each of the Kardashian-West kids have symbolic names.

There's a reason that North West is called North. I was born in the North West, and when I first heard that Kim and Kanye had called their newborn thus, my first thought was that it was some kind of ironic wordplay. Like, okay my husband's last name is "West," what can I do with that... "Slow West?" No. "Will (d) West?" Too much of a stretch... "North West?" Haha, okay yeah sure. Funnily enough, it didn't actually happen like that.

North West was not named for any geographical reasons.

Explaining North West's namesake, momager, Kris Jenner, explained: "The way [Kim] explained it to me was that North means highest power, and she says that North is their highest point together and I thought that was really sweet". I agree, Kris... I didn't doubt it for a second (well...).

Saint West was the first of the more biblical baby names.

For anyone that follows what Kanye West gets up to, you'll know that the singer has turned his hand to preaching the word of the Lord in more recent years.

For anyone wondering whether West had started his own church, it's not quite like that. Kanye has been offering a kind of service at his home that has been described as "a concert series inspired by the church". These concerts happen every Sunday and have spread as far as Coachella in recent months. But the service's biggest exposure is quite clearly through its documentation on Instagram. All of the Kardashian brood, who collectively have millions and millions of followers, have attended Kanye's Sunday Service and shared the "Lord's Message" with their Insta followers.

You might not have known it, but the Kardashian's are quite a religious bunch.

Did you know that Kris Jenner has been the co-owner of the California Community Church since 2010? That's right, although none of the Kardashian/Jenner brood still attend the CCC service, momager, Kris still owns it.

Prior to Kanye taking to running his own Sunday Service, the Kardashian/Jenners experienced a religious split. Older siblings, Kourtney and Kim's, spiritual preferences lay with Vous Church in Miami ("Vous" being a shortened version of "rendezvous"). The Vous Church is also popular with the likes of Justin Bieber, and the Pastor that runs the show, Pastor Rich Wilkerson Jr., officiated Kim and Kanye's wedding.

What makes the Vous service so special?

It's interesting that this church service is run out of an old, repurposed middle school in an impoverished area of Miami's Wynwood district. According to Esquire, "Ninety-six percent of the kids who attend during the week are below the poverty line". But, on the weekend, you've got the likes of Bieber, Di Caprio and, until late Kim, Kanye, and Kourtney visiting. Weird eh?

I can appreciate the appeal of Pastor Rich and his Vous Church. His services involve baptisms in front of a DJ spinning in the courtyard and the praise band is made up of neo-emos. This is a church cemented in the future and the appeal of being involved in something that feels so current, whilst rooting itself firmly in the biblical messages of the past, would surely appeal to anyone. But celebrities such as Kim and Kanye, who live in a super-futuristic, social-media-heavy world, finding a church that understands must be a godsend.

How come Kylie and Kendall weren't that keen on Vous?

Kanye West has certainly got more into his faith in recent years. Rich Wilkerson Jr., the Pastor of Vous Church, is reportedly West's spiritual advisor. There are some similarities between Kimye and Rich and his wife to note. When Rich started his church as an offshoot of his father's Megachurch in 2015, he documented the experience with a reality series called Rich in Faith.  Who does that sound like?

The Kardashian-Wests are good friends with the Wilkersons.

Posting a picture on Instagram, Rich Wilkerson Jr. celebrates his friendship with Kimye, with the hashtag #marriedlifeisthebestlife. I think that it's not just religion, celebrity connections, or reality tv exposure, that has brought these two couples together, or at least I don't think that's the main thing. I think the main thing that connects the two families is just that: family.

If anything has made Kim and Kanye more religious it's becoming parents.

Kim K made no secret of her fertility issues.

In the tenth series of Keeping up with The Kardashians, Kim's struggle to conceive was well documented. On the decision to share her private pregnancy battle Kim has said: “I didn’t know that I was going to be so open with [my fertility challenges]. But meeting people at my fertility doctor’s office who are going through the same things I’m going through, I thought, ‘Why not share my story?’ It’s been really emotional".

The birth of baby "Saint West".

Similar to his older sister, North, Saint West has a bit of an unusual name. I don't think there's anyone that expects the Kardian-West duo to call one of their future offsprings "Gary" or "Kelly" and why should they? If there's one thing that we can be almost certain of in relation to the Kardashian-West brood it's that their children are going to be part of their brand, or, in fact, have their own.

The Kardashians know how to market themselves and how to have control of their image. I don't think that this is something they have always had a grasp of, but, certainly, in more recent years they've proven that they have it down to a T. That is, of course, excluding Rob Kardashian, who can't seem to get a grip on himself long enough to sort out his public image. But who are we to blame him? Rob wasn't born into this life. I mean, sure, he was born into wealth, but celebrity? Public scrutiny? Rob clearly couldn't handle it.

Even down to the way that Kim and Kanye have named their children distinctive and marketable names, these babies already have a brand. The brand of Kimye's babies is something that is going to be masterfully cultivated and pruned by the family empire all of their young lives and, when it is time for them to go off and start their own business empires, you can bet sure as hell, that these kids are going to be more prepared than any other. It's almost a little scary, isn't it?

It could happen. Or we could be looking at having a President Saint West, President Chicago, President Psalm? They're going to be the next Kennedys - without all the assassination business, of course...

There was news circulating some time ago that Kanye West would run for the presidency. Speaking in 2018 in a radio interview with Power 92 Chicago's DJ Pharris, West said "If I decide to do it, it will be done, I’m not going to try," before adding, “Yes, 100 percent it could happen… 2024".

It's not unfair to say that Kanye West has his fingers in a few pies over the years, but I'd argue that there's nothing wrong with having big ideas. Some of Kanye's ideas aren't so bad either. When Kanye first took to discussing his Presidential ambitions at the 2015 MTV Video Music Awards. He stated: “One of my main things once I’m president is the medical industry. I’m going to make sure that the medical industry flourishes".

Kanye's vision to improve medical services in the United States is a noble one. West has come under scrutiny in the past, though, for seeming to show support for President Trump by wearing one of the infamous "Make America Great Again" caps.

Kanye raised a few eyebrows for wearing the Trump cap, mostly because Donald Trump is been considered a bit of a racist. Being an African-American hip-hop artist from Chicago, Kanye doesn't exactly fit the bill for a stereotypical Trump supporter.

One race, one people, one civilization.

Speaking about the controversy that he faced for showing support to Trump, Kanye said: "For someone to say you can't ride with both sides... it's like a modern idea of gang banging or something," he said. "Even red or blue — it's still red or blue. It's divisions. We don't need to think in divisions. We need to think in arms because we're actually one race, one people, one civilization". Kanye showed support for both Trump and Bernie Sanders during the election and said that he would run as a centralist is he ever was to.

Putting it all on hold to run a family.

Whatever ambitions Kanye and Kim might have to save the world or at least America, right now their focus is their children. In 2024, the youngest of the Kardashian-West brood, baby Psalm, will be five-years-old. This means that all of their children will be off to school.

I have a feeling that neither Kim nor Kanye will be responsible for making their children's packed lunches. Who knows, maybe they'll get a hot dinner from the school canteen? Maybe all of the Kardashian-West kids will be sent off to boarding schools in the Swiss Alps, only to re-emerge as adults with cosmetic lines and fragrances and best-selling novels. It's completely possible!

Baby Chicago is the baby no longer.

Chicago West, the second daughter of Kim and Kanye's, and the first child of theirs to be born via a surrogate, entered the world on January 15th 2018. The one-year-old has a younger sibling to look after now.

The complications of naming Chicago West.

Kim has opened up about the difficulty in naming Chicago. Admitting that now she feels like the name doesn't flow, the family refers to baby Chicago as "Chi" (pronounced "shy").

Discussing the trouble with naming Chicago, Kim states: "All the other names we had for her, we were going to name her Rei and spell it R-e-i for Kanye’s dad Rei and she doesn’t look like a Rei. We were going to call her Jo for Mary Jo and have it be Jo West. She doesn’t look like a Jo". But she looks like the city of Chicago? Kim has actually given "Chi" an unofficial "Instagram name"...

The secret name of baby Chicago.

After Kanye didn't want to call baby Chicago "Noel," which is Kim's middle name, the Kardashian took to the gram. "Noel is my middle name and it’s not a one syllable name but it’s short. Like I love the name Noel. Kanye does not. So I unofficially instagrammed Chi Noel and I was like I’m doing this because I want her middle name to be Noel". What's your kid's Instagram name? Do you think that Psalm will have a cyber-name, too? So many questions... but let's get on to that burning one! Let's check out cute baby psalm in his first official Insta debut!

Have you seen a cuter cutie? Whether this kid becomes President of the United States, a Pastor, or the inventor of some wicked smelling perfume, we can guarantee that it's going to be special.