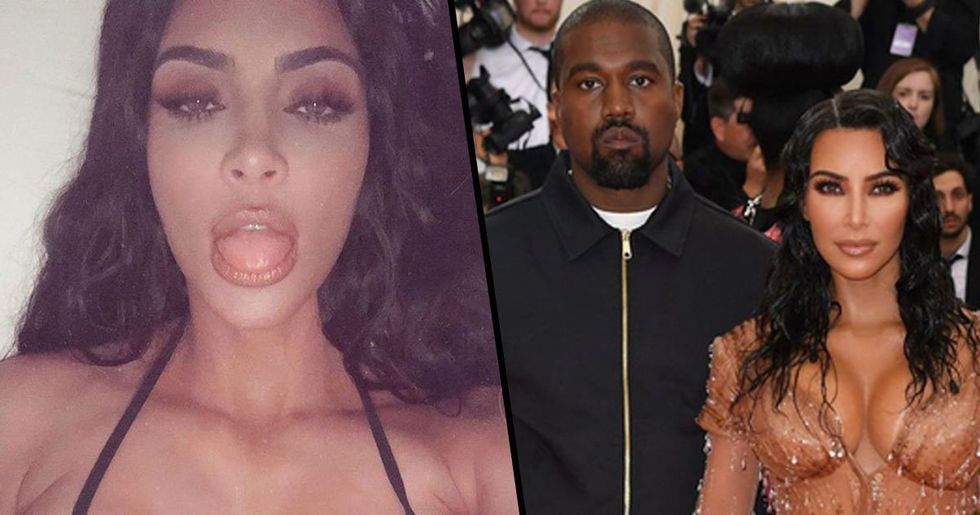 Kim Kardashian's relationship with hubby, Kanye West, is pretty well-documented. From their appearances on KUWTK to their packed social media accounts, it often seems as though there's little about the couple that we don't know.

However every now and then something pops up which reveals a different side to Kimye, and today is one of those days.

Kim uploaded a black and white photo of herself and husband Kanye being a little intimate with one another. The image, uploaded to Instagram, was captioned with a starlight emoji.

But then... it was deleted. Just minutes after being uploaded. Scroll down to see the image for yourselves.

In December of 2012, just months after announcing that they were a couple, Kim revealed that she was pregnant with first baby, North.

Because, a few weeks, Kim appeared on The Tonight Show with Jimmy Fallon.

Another round of the Show Me Your Phone game involves sharing the last message from their significant other - and, in Kim's case, this of course means from Kanye.

And if this recent Instagram post is anything to go by, their love keeps on getting stronger.

However the image was removed within minutes. But it was too late.

Kim has been incredibly busy on social media lately.

She's been promoting Kanye's new album, Jesus Is King, as well as tirelessly promoting her own numerous brands. However, for a change, she uploaded one image of herself and Kanye embraced in an intimate kiss. There's nothing wrong with the image. It's harmless love. However, for some reason, the snap was removed in minutes.

The photo had tens of thousands of likes.

In the picture, the couple can be seen standing on a rocky landscape wearing sports wear, as Kim wraps her arms around Kanye and they kiss. As previously mentioned above, the snap was captioned with a starlight emoji and racked up tens of thousands of likes before being removed in minutes.

And nobody knows why it was deleted.

After scouring the internet for some enlightenment, some explanation for the deletion, I have come to the conclusion that absolutely nobody knows why the image was removed. But then.

The image was re-uploaded.

After being uploaded for the second time today, the image already has millions likes in no time at all. Something fishy is going on at Kimye HQ...