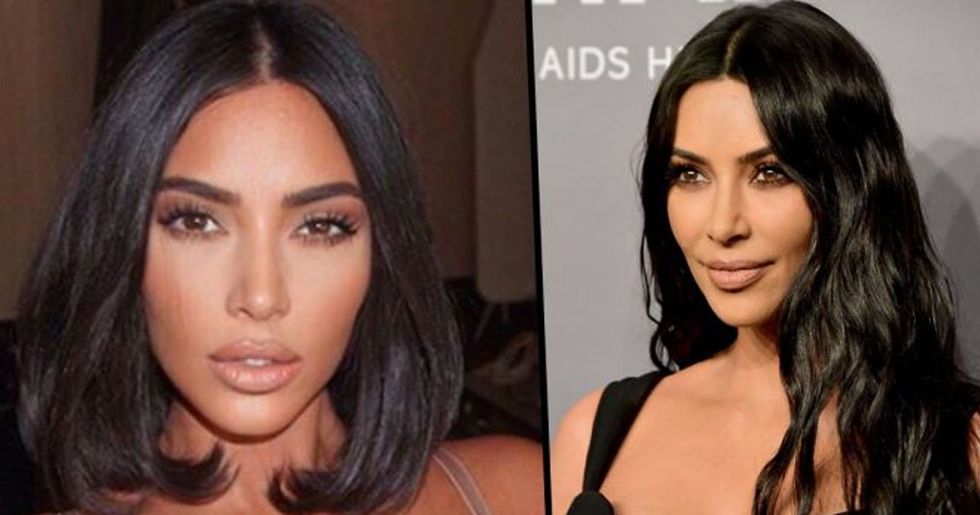 Whether they're filming their reality show, heading to a lunch date, or getting glammed up for the Met Gala, the Kardashians are usually done up to the nines.

All in all, they don't exactly have a reputation for stripping it back and going au natural, even online, where the reality-star family are often accused of photoshopping their pictures or having plastic surgery.

The second eldest of the Kardashian-clan, Kim Kardashian, is certainly no exception to this. The star frequently makes headlines for her alleged cosmetic enhancements, and fans can't help but circulate endless rumors about the star's heavily made-up looks.

But it looks like Kim has ditched her usual heavy makeup look to share a rare, completely natural, make-up free snap with her youngest son, Psalm.

People can't seem to figure out if they like Kim Kardashian or not.

Sometimes she's being slammed for how she acquired her fame (aka being "famous for being famous") and coming under fire for her supposed plastic surgery and sometimes she's being praised for getting candid about her skin condition (more on that later) and for her prison reform work. It seems to be quite a complicated affair.

The star is the second eldest of the Kardashian-clan.

The family, who rose to stardom from their reality show, Keeping Up With The Kardashians, are arguably one of the most famous families in the world.

Kim has branched out on her own.

After a handful of fashion and perfume-themed ventures (remember the sisters' boutique, Dash?) the star has formed her own cosmetics brand, KKW beauty, and has established herself as a successful entrepreneur.

But the star has made headlines for a variety of reasons - both good and bad.

On one hand, people can't help but focus on her supposed plastic surgery.

For example, many people have accused the star of having butt implants, and have slammed her for denying having had plastic surgery. Most recently, after posting a series of '90s themed snaps to promote her latest beauty line from her cosmetics brand, KKW Beauty, fans claimed that she looked unrecognizable and even went as far as to say that she got surgery to look like singing sensation, Beyonce, after noticing the resemblance between the pair.

And, of course, we can't forget photoshop.

We've lost count of the number of comments and headlines detailing the star's persistent use of the app, and failure to cover her tracks.

After seeing this snap, fans were quick to comment on how the trio look like "Sims." Yep, that's some pretty extreme use of the smoothing tool.

On the other hand, the star has also been receiving praise.

For her groundbreaking prison reform work, for instance, in which she has been involved in freeing over forty people who were incarcerated for decades too long. Most notably, the reality star helped to release first-time offender, Alice Marie Johnson, who was sentenced to life without parole in 1996, for a non-violent drug offense. Whether you like her or not, you can't deny that she's using her platform for good.

In a move that left the internet stunned, Kim is now training to be a lawyer.

The internet went into a state of shock when the star announced that she was enrolled in law school and was officially training to become a lawyer. But hats off to Kim, putting in the hours for school all while having 4 young kids must be tough, and, given all of the fortune that she has, there really is no need for her to be studying – which clearly shows that she’s passionate about it.

Believe it or not, she's managed to make positive headlines for her appearance too.

For those of you who don't know, Kim has a skin condition called Psoriasis, a chronic, incurable, skin condition that can result in painful, blotchy, cracked and sometimes, bleeding skin.

The star was praised for sharing a series of brutally honest snaps of her skin.

Usually hiding her skin condition beneath a layer of makeup and meticulous lighting, earlier this year, Kim took a refreshing change of direction to share a morning Instagram story with her followers showcasing her psoriasis.

In the posts, she asked followers for some advice on treating the skin condition.

Her followers seemed happy to oblige, although many flocked to her social media to praise her for being honest and open.

So it's not all bad.

Although it's hard to deny that, when it comes to her looks, there is definitely more negative attention than positive.

But, fame and fortune aside, the star is also a mom of 4.

The star rarely posts about their youngest son, Psalm, on social media.

Since announcing his birth in May, we haven't seen too many pictures of the youngest of the star's brood.

And it looks like the star has gone au natural while sharing a rare selfie with her son.

A refreshing change from her usual, highly-made up, airbrushed images, Kim shared a make-up free snap with her followers, proving that even a Kardashian can strip it back every so often.

Kim gave her followers a highly anticipated update on her son.

"My little man is the sweetest ever! He’s honestly the best baby. Sleeps through the night and by far my most calm. How did I get so lucky," the star wrote.

Some followers commented on how beautiful she looks without make-up.

And, of course, many also commented on how adorable her son is, too.

Others weren't convinced that she was actually make-up free.

It's hard to get away from the reputation that she's built up - which doesn't really include going bare-faced very often. Although, to be fair to Kim, she never claimed to be completely make-up free in the pic.

But it looks like Kim isn't the only sister to have kept it natural recently.

Older sister, Kourtney Kardashian, has been drawing in praise for showing off her stretch marks. Keep scrolling to see the pic that everyone's talking...