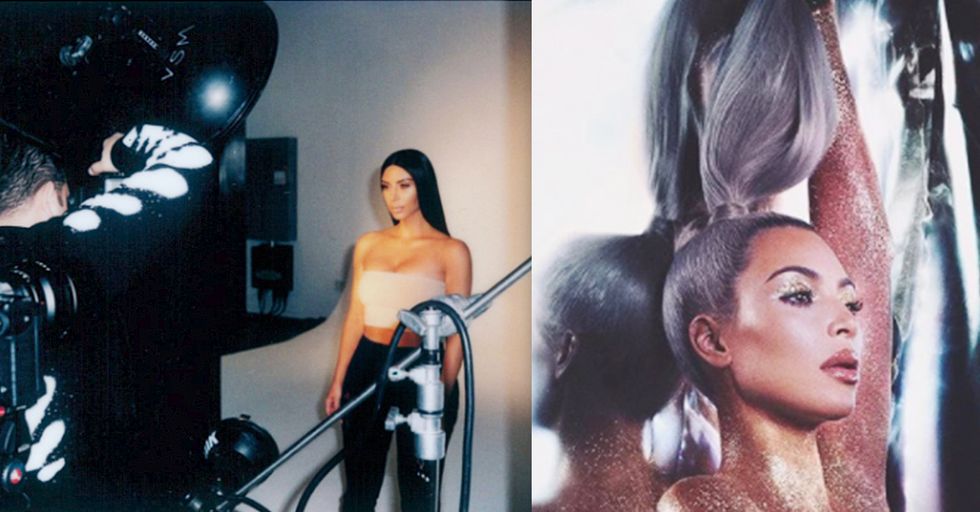 It's kind of surprising that it took Kim Kardashian this long to get completely naked and cover herself in glitter, but at least it's happening now, right? Right.

Kim Kardashian is pretty much never not in the news.

You're guaranteed to see her face if you open your phone, or your computer, or your tablet, or your Apple Watch, or your Blackberry... You get the idea. She's everywhere.

For example, in the last couple of months alone, there's an entire laundry list of things she made headlines for, including her spot-on Sonny and Cher Halloween costumes.

It's really remarkably accurate. She also came under fire for her Selena getup for the same holiday.

And no joke, literally yesterday, she was in the news because of the ice cubes she had at her baby shower.

To be fair, they are super fancy and pretty weird ice cubes. But come on! Ice cubes! The woman is a media mogul/magician.

Oh yeah, then there was that time she got naked and climbed a tree.

Sure it was for a photo shoot and it wasn't the result of some night of partying that got out of hand, but it was still a pretty good story.

Now, she's broken the Internet once again for her naked body, only this time, it's covered in glitter.

The nude glitter photo is a promo for her makeup line, KKW Beauty, and it's honestly so hot it might make a customer out of you (if you weren't already one). Just wait 'til you see it...

It's too fierce and too beautiful for words. Lgbdkagnwogbrwia!! That's all we can say about it. Literally, no real words come out when we try to describe how incredible this photo is.

It's mesmerizing. It's stupefying.

It's like a Harry Potter spell in photo form. It also makes us wonder what the cleanup process was like, but that's for another article.

Kim's post following the glitter photo is this video, which hints at a KKW Beauty release on December 1.

Just in time for the holidays, you'll be able to glitter your entire body up for Santa. No? Too far. Sorry not sorry.

One Twitter user had a word of caution for Kim following the release of the glitter photo: