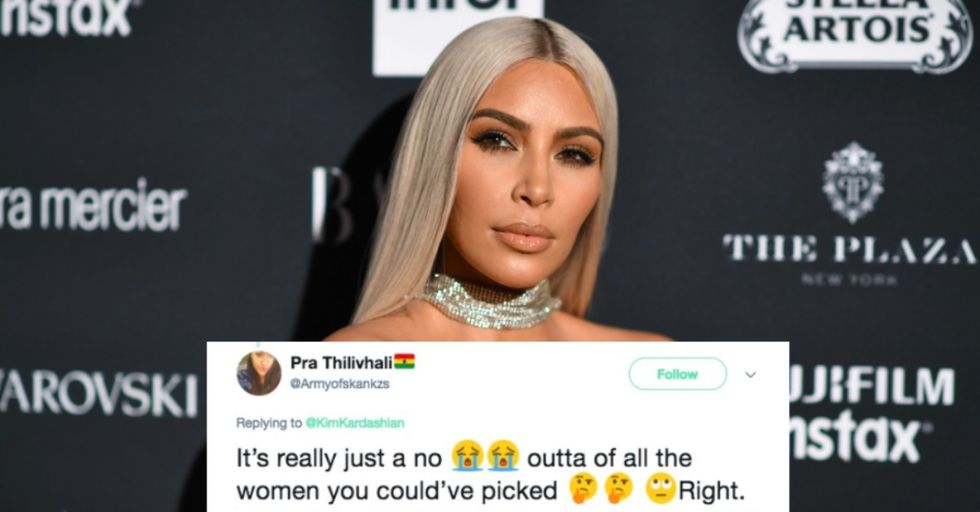 First, Kim K and her bestie Jonathan Cheban wowed with their striking Sonny and Cher costumes.

They were scarily accurate, but it's easy to impress with a spot-on Halloween costume when you probably have a legion of assistants and makeup artists wrangling clothing and props for you, right?

That's probably why Kim thought she had to keep going. Here, she's dressed as Madonna, blonde wig, pouty face, and all.

She could have stopped there — dressing up as two huge music legends in one Halloween weekend is more than enough for thirsty fans. But she just had to round out the trio, and what did she go with?

Well, Internet, she decided to dress up as the late great Aaliyah.

The look comes from the iconic R&B singer's 2001 music video for the song, "Try Again," which is ironic because as soon as Kim K posted this video, many people told the reality star to try again when it came to her costume.

Of all the women she could have picked, Kim Kardashian just had to go as Aaliyah, the beloved singer who was killed in a plane crash in 2001.

There were so many other options. So many. Yet, Kim K managed to pick one that riled people up immediately. Some cried insensitivity, and others called her out for cultural appropriation.

"Legend or not Aaliyah is a black woman and you're not," this Twitter user wrote.

Of course, this isn't the first time the Kardashian star has come under fire for cultural appropriation. Over the summer, she was accused of wearing blackface during a photo shoot for her beauty line. But not everyone was so harsh toward Kim K for her choice in costume...

This Twitter user posited that most people are upset about Kim's choice in costume because Aaliyah is so beloved.

I think the reason ppl are mad that Kim Kardashian dressed as Aaliyah for Halloween is cause Aaliyah is precious to… https://t.co/ax2UBCRxll
— Ari Gold (@Ari Gold)1509243695.0

That makes sense. But Aaliyah's also a tragic figure who died far too young in a terrible accident, so you can understand why people are upset that Kim would decide to parade around on Halloween dressed as her.

Others didn't agree with the idea that Kim K's Aaliyah's costume was cultural appropriation at all.

I HATE when y’all make me defend Kim Kardashian but her Aaliyah costume was nothing even adjacent to cultural appropriation. Please stop.
— C . (@C .)1509306306.0

And the fact of the matter is, both opinions are valid. She could have chosen a costume that didn't have any cultural implications at all and saved herself a lot of online hate.

But some even praised Kim for the way she pulled off the costume.

If you want to use Halloween to make a statement or to dress up as a potentially problematic character, you've got to be prepared for a flurry of varied responses.