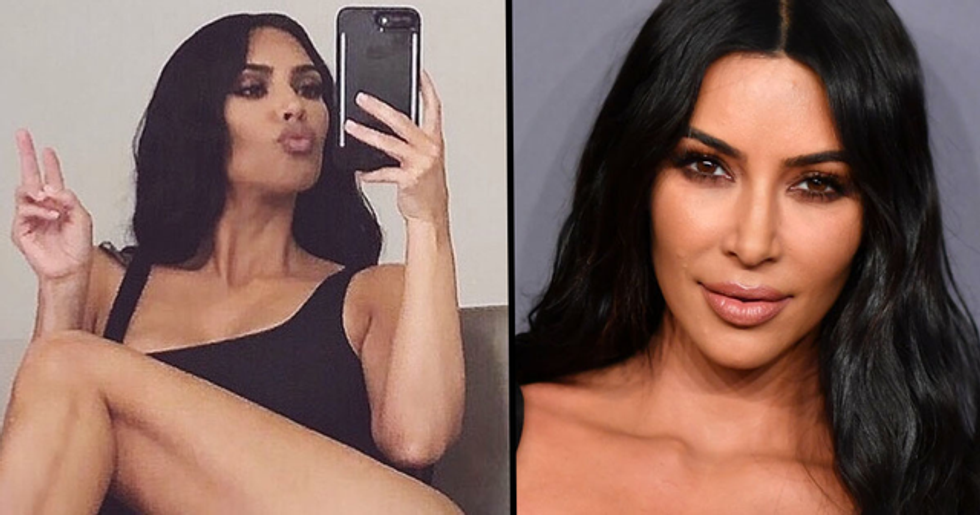 Kim is also no stranger to using her body to get attentions. She has one of the most famous butts in the universe, and certainly knows how to use it. We all remember that time she broke the internet posing in what looked like a trash bag for Paper Magazine.

But Kim's latest looks is somehow even more revealing than being fully nude. She showed up to the Hollywood Beauty Awards in a vintage Thierry Mugler dress which was essentially a wardrobe malfunction waiting to happen. We have to say, we're kind of into it - and even more than that, we're into the bizarre, unfounded rage it has solicited from some of the internet.

Kim Kardashian is one of the world's most famous faces.

But before that, the Kardashain name had another dubious claim to fame.

She's married to Kanye West, one of the biggest rap musicians of all time. The pair started dating in 2012, married in May 2014, and have three children together.

She often wears quite outrageous outfits in order to generate some attention - like this gold two piece with a split up to the crotch.

And everyone remembers her Paper magazine cover.

The picture, alongside the much replicated caption, caused an online sensation when it was released in 2014. The picture currently has almost 100 million likes on Instagram.

She's also not afraid to get naked.

She posted a fully naked selfie on her Twitter in 2016 - much to the rage of a certain subset of trolls.

Even in recent days, Kim has been making some bold fashion choices.

On February 6th, Kim went for a daring (and potentially risky) neckline at the American Foundation for AIDS Research Gala.

Kim's most recent event was the Hollywood Beauty Awards.

And it was clear she was planning her outfit in advance, as she teased the look on her Twitter.

She got fans excited for something spectacular.

Kim posted another tweet expressing how excited she was about her Hollywood Beauty Awards outfit.

And we have to say, the look didn't disappoint.

It was everything you could hope for from a Kim K event outfit - shocking, revealing, sexy and super fashionable.

Kim herself shared some snaps.

She posted a pic of her solo, plus with her friend and date for the event, with the caption "#Mugler".

The dress was vintage and very rare.

It was designed by Thierry Mugler, and consists of a few overlapping straps of fabric which (just about) covers the necessary areas.

It's clear Kim's dress has made an impact.

The combination of fashion heritage and borderline nudity makes it a sure-fire hit. It's certainly very eye-catching - although we can't imagine it was very comfortable!

Although some pointed out this uncanny resemblance.

We have to say, it does have a slight look of the back-to-front about it, although we're sure Kim's army of staff would never allow a mistake like that.

Of course, the usual suspects had something to say about it.

Including notorious Kim-critic, Good Morning Britain host Piers Morgan. He tweeted an image of Kim alongside a scathing comment.

It's not the first time Morgan has made comments about Kim.

Back in 2016, the TV host offered to buy Kim some clothes to cover her body up, all the while making some unfounded claims about the state of her finances.

She retorted that Morgan's "offer" was actually pretty creepy, claiming it was like something that would take place on affair-based dating platform Ashley Madison.

This dress has also been the source of another scandal.

Many of Kim's looks are quickly snapped up by fast-fashion outlets, who produce and sell cheap replicas. However, one eagle eyed fan noticed the Mugler-alike dress tagged with Kim's name before she was even seen in the look.

Some believe this might be a sneaky move by Kim.

She may have colluded with fast fashion empire Fashion Nova in order to maximise the sales potential of her dress replica.

Either way, there's no denying Kim got a reaction.

She's caught the eyes of the whole of Twitter, enraged a selection of the usual suspects, and even started the fashion version of the Watergate scandal.

We have to say, no one does it quite like Kim.

And hey, if she wants to wear a dress consisting of what are essentially nipple covers, we say more power to her. At least she never looks boring!