Kim Kardashian's Third Child Is on the Way, but People Are Refusing to Call Her 'Pregnant' | 22 Words 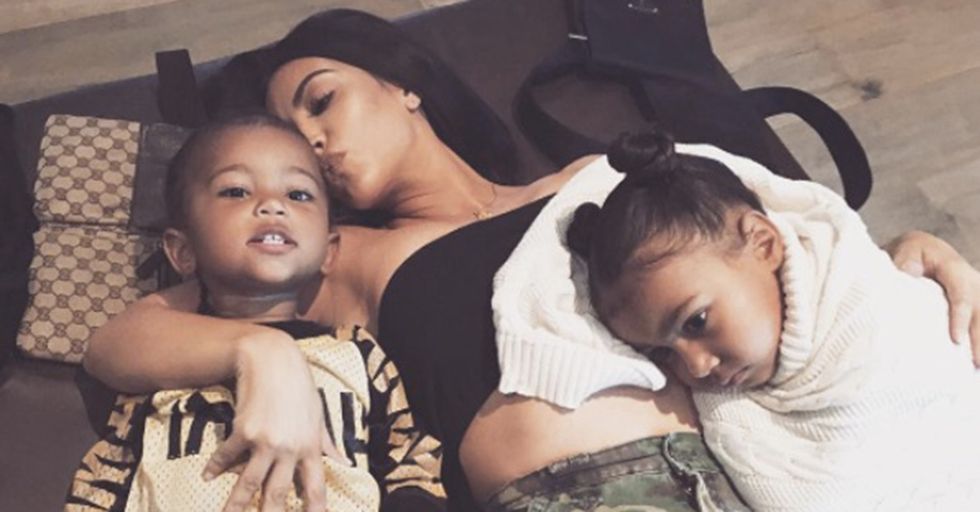 Kim Kardashian's Third Child Is on the Way, but People Are Refusing to Call Her 'Pregnant'

And while Kim Kardashian has always been a lightning rod for attention, both good and bad, her latest pregnancy announcement has people up in arms for a reason her first two pregnancies didn't.

So, what's different this time?

She's known by fans and haters alike as the celebrity who's become famous simply for being famous.

Even everyday social media posts like this draw all sorts of comments and shares. But when she has BIG news? It tends to go totally viral.

Things get even nuttier for the tabloid magnet.

Last week, she made waves recently for posing as American icon Jackie O.  Whether or not it's in poor taste is for others to judge, but it speaks to how often the celeb icon attracts (and possibly courts) scandal.

Since becoming a mom 4 years ago, Kardashian has made some nontraditional parenting choices, but no one can say she doesn't love her kids, as evidenced by the many pictures of them together.

By all accounts, she's a loving, attentive mom who also enjoys flaunting her sexuality, and that might be the rub when it comes to the criticism she's facing today.

Now, she's got a third child on the way!

Surprisingly, the announcement came with a swift and angry backlash.

As the news came in, reactions were mixed, but one aspect of the pregnancy seemed to dominate the headlines.

Kim and Kanye are having a baby, but she isn't pregnant. So... how does that work?

Here's the kicker that sent everyone tweeting like people possessed.

They're employing a surrogate to carry the child.

Some people think the headline "Kim is pregnant!" is a little misleading.

She's the mom, but not carrying the baby. Unfortunately, this is the type of shaming that we've grown accustomed to on social media. Even distant observers feel there's a "right" and "wrong" way to raise a child.

Still, others found that the announcement was suspiciously timed in the wake of ANOTHER big royal pregnancy development.

People really will latch on to any scandal possible when it comes to the Kardashians, and while this comment was meant as a throwaway joke, it speaks to how the public treats a woman expecting a child who they deem to be in the "public domain."

Others are throwing shade at the surrogate news with some clever wording.

It's not Kim, it's "Kanye's surrogate." No one speaks out on Twitter saying, "I'm mom-shaming you!" but that's exactly what we're dealing with here. Yikes.

However, surrogate advocacy and support groups were quick to jump to the defense of the maligned celeb.

There are many reasons to opt for a surrogate pregnancy, but the ones who know firsthand aren't about to speak up and throw themselves in the midst of a Kim Kardashian Twitter controversy. So the louder, more negative side tends to "win" on social media. Or, more specifically, they tend to run unopposed as celebs don't want to stoop to engaging the haters and others tend to leave personal matters just that...personal.

Kim said back in 2015 that she suffered from preeclampsia in her earlier pregnancies.

For those who don't know, the condition can make the pregnancy QUITE painful, even by your normal pregnancy standards. Further, it can endanger the mom's life due to high blood pressure and even liquid in the lungs. A surrogate would certainly alleviate those concerns.

All of a sudden, the decision to recruit a surrogate takes on a new development.

Despite Kim K. being a very public figure, this is a very personal decision...whether or not people choose to acknowledge it is a different story, and one that's very much outside her control. She's proven a master manipulator (yeah, that's the right word) of the media, but it's understandable that this is one war she wouldn't want to wage

Because it's a celebrity who's proven media savvy, many are wondering if statements and interviews like this served more to set the stage for later surrogate pregnancies.

It's understandable that people might question the media queen's motives, but the reactions seem to be more knee-jerk than grounded in any factual basis.

I mean, when THIS is your de facto pregnancy announcement, it's only natural that people would be skeptical as to the motivation.

It's a tricky balancing act for a very extraordinary case of celebrity, isn't it? Well, it's really NOT. She's a human being happy to be welcoming a child into the world (expected arrival date: January). But the mom-shaming seems to come from people's inability to view Kim Kardashian as anything other than some sort of object. That's a different type of shaming altogether, but shaming is shaming.

How about we save our reactions and just offer a more traditional reaction?

Congrats to Kim and Kanye on baby #3!