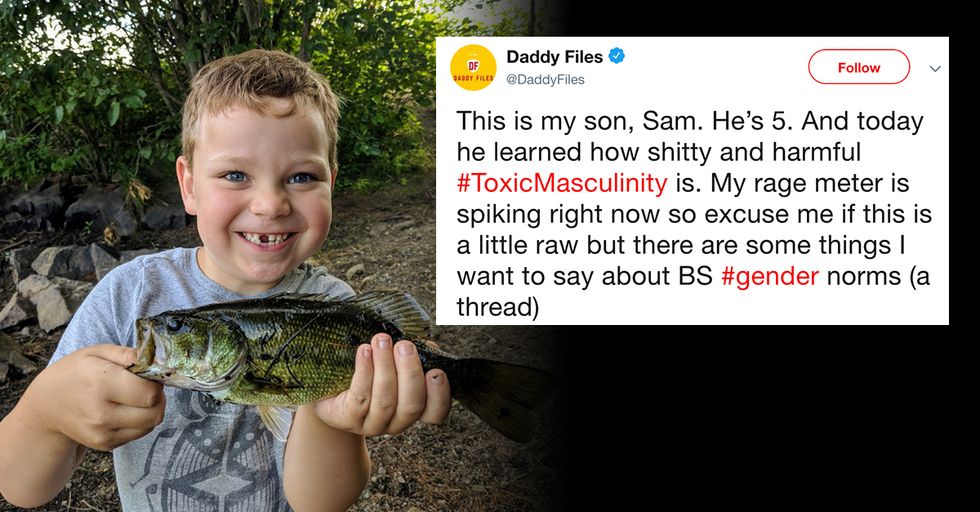 Kindergarten Boy Bullied Mercilessly for Wearing Nail Polish, Until Dad Does the Same

Toxic masculinity is pervasive in today's society. It's the shared idea that there is only one way to "be a man," and that any deviation from that is considered to be shameful. Strength, aggression, even hyper-sexuality: all of these are acceptable "male" traits. Meanwhile, showing too much emotion is considered to be "feminine." And of course, those ideas go into the larger picture of gender stereotypes: things that only men wear, or only women can do, and more.

One little boy learned about this concept in an upsetting fashion, after deciding to wear nail polish to school. Sam, a five-year-old boy with frankly fantastic red-nails, feels good in nail polish. But, when he went to school sporting his new style, Sam's classmates decided to give him a hard time about it. After hearing about the bullying, Sam's father handled the situation in an amazing way.

Keep reading to see what Sam's dad had to say on Twitter. Sam isn't obligated to stick to gender stereotypes (nor is any other person), and his dad made sure everyone knew it!

Apparently, Sam had a run-in with the ancient establishment we like to call "gender norms."

Here's some background on Sam:

Of course, nothing is made to be only for boys or girls—it’s all in our perception of them.

Sam perceives a number of girl-like things to be fun.

Hey, purses are useful and cute. They help you carry your things!

He can pull off bright red nail polish like a pro:

And nobody should have a problem with beautiful nails.

Unfortunately, his classmates didn’t agree with that.

Can you imagine being tormented for the entire day over something so innocent and trivial?

Why could only one classmate show empathy and acceptance? It might have something to do with the gender-normative idea that assumes "boys shouldn’t wear nail polish."

Sam called his dad at work.

His next words will break your heart, too!

Because Sam wanted the bullying to end.

And he felt the only way forward was to conform to his classmates’ demands and remove the polish.

We shouldn’t have to fear the judgment of our peers for expressing the things we find beautiful, like Sam did with his nail polish.

Where could the other kids have learned such toxic ideas?

After all, we teach our kids all about the world even before they set foot in school, sometimes without realizing it. They pick up on how we react to different situations, and if we give the impression that different is bad, then that’s what they’ll think.

Understandably, Sam’s dad was not happy with how his son had been treated.

Especially since Gouveia had been trying to teach his son something different.

Those seem like ideals everybody should strive for, in themselves and future generations.

So, Gouveia told Sam to try something the next day:

Confront the toxic masculinity head-on, bright nails and all!

What reason would they have to be upset?

Either way, Gouveia is having none of it!

He told Sam about some other guys who wear nail polish.

There's nothing like having evidence to support your point.

Personal style is all about feeling good in your own skin.

So if nail polish makes Sam feel good, and he thinks it’s beautiful, then he should wear it!

So, Sam made a decision.

This sibling-support is the best thing ever!

Gouveia painted his nails too.

And Sam chose the color of the paint.

Let’s hope Sam (and kids like him) keep up the fight.

Because we all deserve to feel good about ourselves, and nobody is beholden to gender stereotypes.

Gouveia ended his thread with a final thought:

Now that's how you do parenting! A+ for this dad.

Here’s what other people said about this:

Looks like Gouveia isn’t the only one trying to change the narrative.

And, he isn’t the only Dad painting his nails in solidarity.

Just look at this little guy and his gorgeous blue nails.

He’s not the only male Patriots fan who paints his nails!

And, clearly, the Patriots approve.

Look at this family:

@DaddyFiles Hey Sam just keep enjoying what you enjoy. My youngest son gets me to paint watermelons on his toenails… https://t.co/YaShuu2dKg
— candace (@candace)1540359658.0

They are able to enjoy summer with cute nail polish, and that’s perfectly okay!

Overall, Gouveia’s post received an outpouring of love and support!

And look how happy the response made Sam!

Sam was able to get some free polish from OPI!

He’ll be able to show off his nails for a long time!

Here’s Sam’s adorable thank-you for the support he got:

How heartwarming is this?

If you’re wondering how the story ends:

It looks like the bullying is no more. Kudos to Sam for his bravery, fearless self-expression, and outstanding taste in nail polish! Kids deserve the peace of mind that Sam can now have. Be sure to share this story with friends and other parents who may find it relevant!