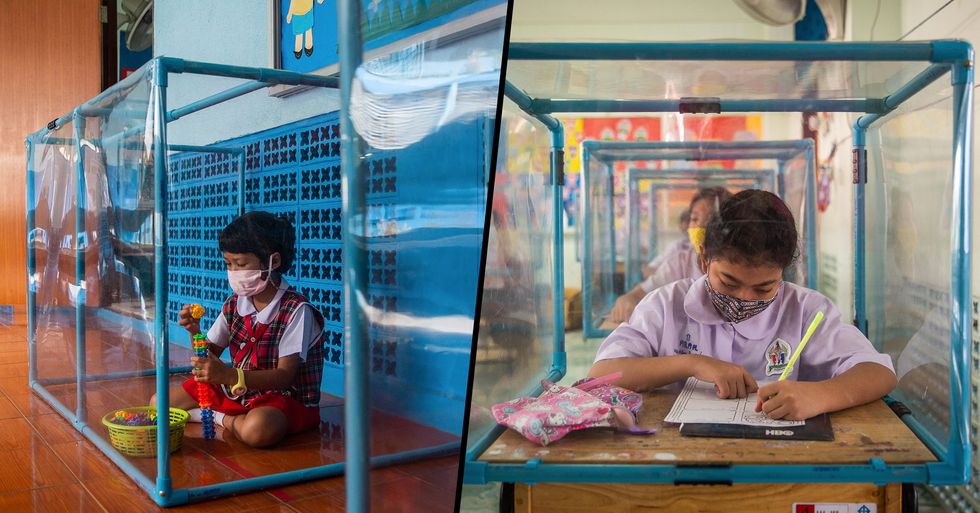 A kindergarten has solicited a strong response online after a series of pictures surfaced of the extreme measures it's taken amid the coronavirus pandemic.

A kindergarten has gone to great lengths a mid the pandemic.

And since pictures emerged, it's measures hugely divided opinion online.

Although some are taking it more seriously than others.

A kindergarten in Thailand has gone viral this week for enforcing extremely strict measures in light of the pandemic.

Schools in the country were given the green light to reopen back in July.

As well as temperature checks and regular sanitization.

Although, some schools are stricter with this than others.

With some going to pretty extreme lengths to protect each other from the virus.

The Wat Khlong Toey School in Bangkok is one of those schools.

To begin with, when students arrive at school teachers give the children a face mask to wear throughout the day, while face shields are also provided in some cases.

Sinks and soap dispensers have been built outside classrooms and children are required to have a temperature check when they arrive, with a facial recognition scanner automatically sending a message to parents.

The school has also turned ballot boxes used in elections into partitions between desks.

The protective screens are to ensure social distancing measures are followed.

The school is clearly taking the pandemic very seriously.

And, according to one student, the children feel much safer this way. "I feel good studying behind the box because it makes me feel safer returning to school," said student Kanlaya Srimongkhol.

Since the images emerged...

Reactions online have been pretty divided.

Some were on board with the measures put in place by the school.

And raised the point that it's better than kids not being able to interact with other children their own age.

Although, not everyone agreed.

In fact, the majority condemned the whole thing.

Some thought it was better to have not had kids returning to school.

With many parents going as far as to describe the boxes as "jail."

All in all, many thought the measures we just too far.

Either way, it's clear the school is focused on protecting staff and students from the virus. Another school recently went viral for their handling of the pandemic, but not for the same reason...