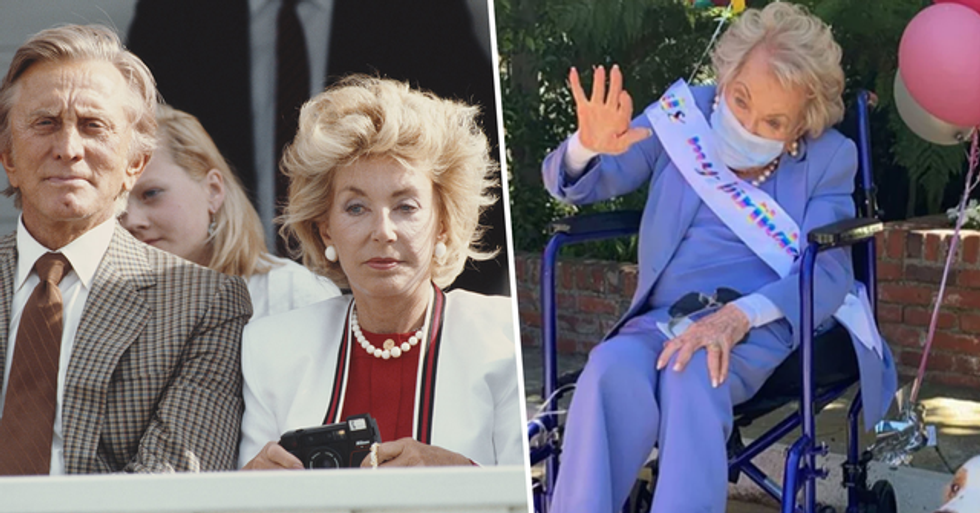 Earlier this year, Hollywood lost one of its legends - Kirk Douglas, one of the actors of the Golden Age, passed away at the impressive age of 103.

And now, his widow, Anne Buydens, has celebrated her first birthday without her husband, but her family really pulled out all the stops...

This year, the world lost a legend.

National treasure, Kirk Douglas, sadly passed away at the age of 103, but boy did he live an impressive life...

But not long after, Douglas enlisted, joining the United States Navy in 1941, thus putting his acting career temporarily on hold. From there, Douglas served as a communications officer in anti-submarine warfare when the United States entered WWII.

But after he was discharged, Douglas swiftly returned to the world of entertainment.

He began working in New York City, doing radio, commercials, and theater. During this time he appeared in network soap operas and various plays, including his break-out stage role in the 1943 soap, Kiss and Tell. This became a foundational role in his success, which lead to numerous film offers.

But of course, his signature role came in the 1960 classic

And while making the acclaimed flick, Douglas challenged the practice of blacklisting certain Hollywood figures over their possible communist views. He hired blacklisted screenwriter Dalton Trumbo to write the movie, according to Biography.

While working towards his career, Douglas also welcomed 2 sons with ex-wife, Diana Dill.

His son (and well-known actor) Michael Douglas was born in 1944. His second-born, Joel followed in 1947.

Like their father, both sons rose to success and stardom in the film industry.

Michael began his career in with the film, Romancing the Stone, while Joel opted to work behind the camera, producing films.

Douglas led a transformational life throughout the years...

From his service to the country to his foundational work in the realm of television and film.

And, on February 5th, 2020, the Hollywood icon passed away at his home.

The news was confirmed by his son, Michael. "It is with tremendous sadness that my brothers and I announce that Kirk Douglas left us today at the age of 103," he said. "To the world, he was a legend, an actor from the golden age of movies who lived well into his golden years, a humanitarian whose commitment to justice and the causes he believed in set a standard for all of us to aspire to."

"But to me and my brothers Joel and Peter he was simply Dad, to Catherine, a wonderful father-in-law, to his grandchildren and great grandchild their loving grandfather, and to his wife Anne, a wonderful husband." "Kirk’s life was well lived, and he leaves a legacy in film that will endure for generations to come, and a history as a renowned philanthropist who worked to aid the public and bring peace to the planet."

He concluded his touching tribute by revealing what he told his father on his final birthday.

"Let me end with the words I told him on his last birthday and which will always remain true. Dad- I love you so much and I am so proud to be your son."

Tributes quickly poured in from both fans and fellow celebrities.

Legendary actor Kirk Douglas has passed on today at the age of 103. An Academy Award winning actor and recipient of… https://t.co/xMOHEQRR0g
— George Takei (@George Takei)1580945493.0

Twitter was flooded with tributes for the legendary actor.

And The Academy were amongst those paying their respects.

"Goodbye to a Hollywood legend."

He described the star as "inspirational."

But, even more heartbreakingly...

Kirk has left behind his wife of nearly seventy-years, Anne Buydens.

The couple have had one hell of a journey together.

Kirk first met Anne, who was a producer at the time, on the Paris set of 1953’s Act of Love and, in their 2017 book, Kirk and Anne: Letters of Love, Laughter and a Lifetime in Hollywood, Kirk wrote that he was immediately drawn to Anne.

And went on to have 2 sons together, Eric and Peter, who joined Kirk’s other sons from his previous marriage — Joel and Michael.

The couple dedicated much of their lives to philanthropist work.

Through their joint organization, the Douglas Foundation, they fought to "help those who cannot otherwise help themselves," and have together donated millions to several worthy causes.

And, just over 2 weeks after his death, the fate of Douglas' fortune was revealed.

In typical Douglas fashion, they bequeathed it to charity, rather than their family. In a previous interview with The Hollywood Reporter  Douglas had said: "My wife is very smart. Fifty years ago she set up a trust, and it's been growing ever since. So recently [in 2012] I said, 'How much money do we have in that?' And she said, '$80 million.' I said, 'What?!'"

They made quite the team.

So, understandably, Anne must be going through a tremendously difficult time adjusting to life without her partner.

Understandably, this was always going to be a difficult day for Anne - Her first birthday in nearly seventy-years without Kirk by her side.

But the widow was determined to still celebrate her big day.

Anne celebrated her milestone birthday on Thursday, and was greeted by several of her closest family members and friends, including her grandson.

Thanks to social-distancing measures, it wasn't your usual party.

Filming on his Instagram Stories, her grandson, Cameron Douglas, showed off her special "social-distancing" birthday party. He can be heard explaining: "First birthday without Pappy. Now we’re going to stay with it as we go through this amazing procession."

So many people had gathered to celebrate Anne's big day...

As Cameron drives into Anne's driveway, he's greeted by several masked people lining the sidewalk who were surrounded by colorful balloons. Cameron says, "Now, we’ve been in line for about 20 or 30 minutes. I’d wait 20 or 30 hours to say happy birthday to Anne and here we go."

Anne can be seen, donning both a face mask and a birthday ribbon, in seemingly great spirits.

She waves enthusiastically at the camera as Cameron pulls up, who shouts: "Hello, hello, hello! We got some flowers for Anne!"

It's great to see that she could still celebrate her special day.