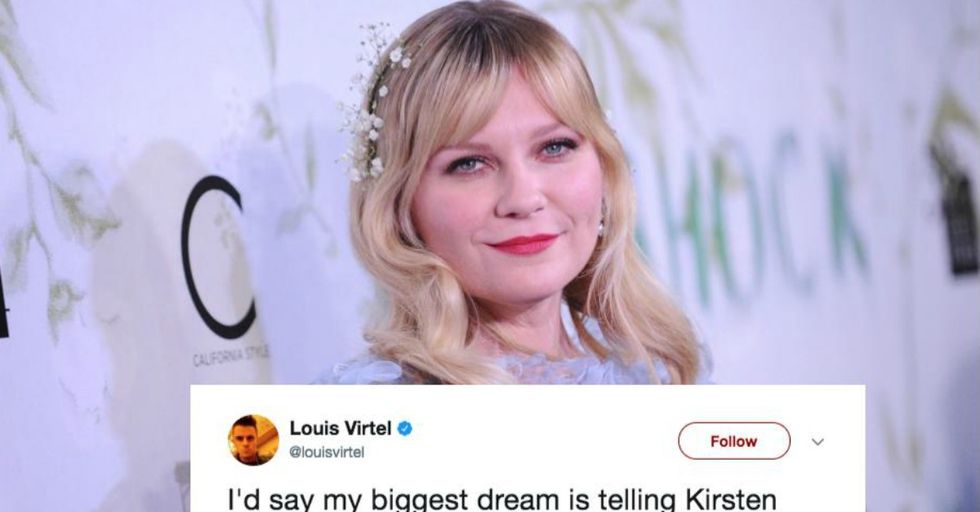 Kirsten Dunst Just Changed This Man's Life With One Word

What are your far-fetched hopes and dreams? Maybe you want to be an award-winning filmmaker. Maybe you want to own a petite, stylish cottage in the south of France. One man's greatest dream was to receive a very specific tweet from Kirsten Dunst.

That man achieved his dreams today.

Louis Virtel, self-described "verbal Voguer," Twitter comedian, and past Jeopardy contestant, confessed his lifelong dream to the world on October 18.

He tweeted, "I'd say my biggest dream is telling Kirsten Dunst I'm a huge fan only for her to mutter 'Pathetic' and walk away." That's a new one. But go on...

With just one word, she made his dreams come true. "Pathetic," she tweeted, at 1:57 PM on October 19th. Then she didn't say anything else. That's the Twitter version of "walking away."

The man was beside himself.

"Honored." He replied, "And now I have no dreams left!"

There were some great reactions to this unexpected exchange.

Louis wept, for there were no other worlds to conquer.

What are your greatest hopes and dreams? Let us know in the comments.