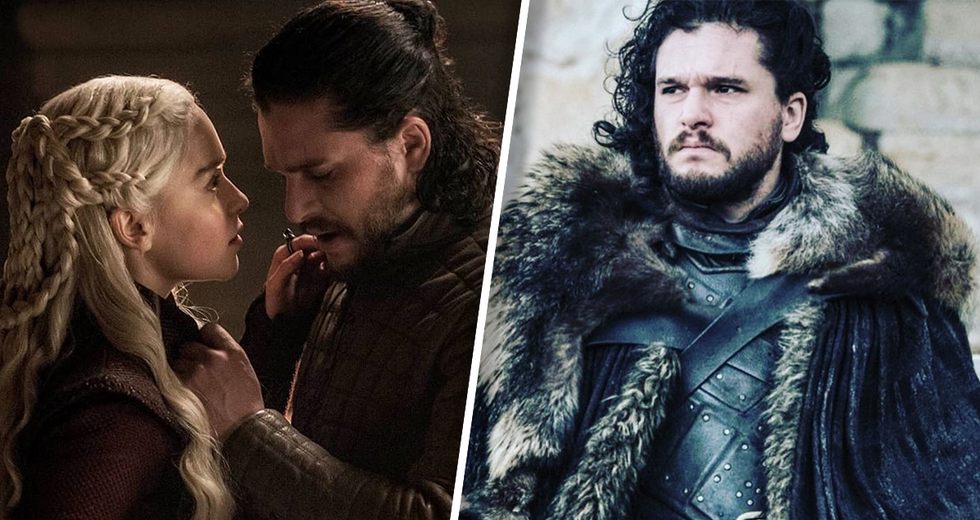 Before we start, if it isn't already obvious, this post will contain spoilers, so look away if you didn't watch the Game of Thrones finale!

The final episode was a whirlwind, a rollercoaster of emotions, and, this morning, the internet is sharing its opinions on the show's end. After the season we've had, the reactions to the show's end were always going to be a mixed bag.

Even Kit Harrington (AKA our beloved Jon Snow) had something shocking to say about last night's episode.

The 'Game of Thrones' finale might just have been one of the biggest television events ever.

After seven seasons of building tensions, we entered the final season with everything to play for and a lot of questions waiting to be answered.

And of course, like with any fanbase, there were mixed reactions to the ending.

Well, you can't exactly please everyone, especially with the Game of Thrones fanbase. We all remember the Red Wedding, don't we??

But Kit Harrington is here to squash that negative energy!

And set the record straight on how you should actually feel about the finale. So all the haters out there, listen up!

Knowing that the critiques were coming...

(Get it??) Kit made a statement to Esquire about the critical reception of the last show, and it was bold. "Whatever critic spends half an hour writing about this season and makes their judgment on it, in my head they can go f–k themselves," he stated.

For someone who works with such a tight-knit cast, Kit felt the need to share how his show was unlike any other production.

"A lot of jobs, everyone goes back to their apartments at the end of the day....[But] I think part of what made GoT successful was the fact that we got on like a family. Everyone who came in was welcomed into the family." Well, said Kit! And who wouldn't be protective of their family?

It's important to remember all of the efforts that go into a show like this...

And all of the planning, people and feelings involved. Most of the cast have a personal tie to their characters and the storyline, so how do you think it makes them feel to be critiqued harshly? And while the season has come under fire in many ways, many, many people still watched!

The viewing figures for this final season have been astonishing.

Reviews of this final season have been, let's say... mixed.

There has been blunders and controversies left, right and center since season 8 began - there's even a petition circulating to have the whole season rewritten.

But most are feeling nothing but love for the show now the final season has come to a close.

Can we just stop criticizing writing for a moment and appreciate how incredible the cinematography was in this se… https://t.co/PpTGzW3Mt3
— chagan_rt🇮🇳🇮🇳 (@chagan_rt🇮🇳🇮🇳)1558346197.0

We can't be mad when we're feeling so many other things after last night's episode.

We guess we can look past the errors of judgement...

The show has given us some great memories, unforgettable characters and goosebumps on goosebumps over the seasons.

Need a quick reminder of what happened in the final episode?

It was eventful, to say the least.

We joined the characters as they had to deal with the problem of Daenerys Targaryen.

She had just burned down King's Landing and they had to make the decision as to whether to follow the seemingly ruthless Daenerys or to save Westeros from what was likely to be a reign of terror. They decided to stop her. Jon Snow, after a kiss, stabbed Daenerys and Drogon, after melting the Iron Throne with dragon fire, flew away, carrying his mother's body.

Jon, because he killed Daenerys, became a prisoner of the Unsullied.

He was ordered to return to the North - to the Night’s Watch, it appeared - and he reunited with Tormund Giantsbane and Ghost, his beloved direwolf.

Tyrion Lannister was imprisoned by Daenerys for releasing his brother, Jamie, in the previous episode.

It was Tyrion who talked Jon Snow into killing Daenerys and he decided that Bran Stark would become king of Westeros. Bran made Tyrion his hand.

Ayra Stark decided that she's going to travel West, past where the maps of Westeros stop.

After making a pitch for the independence of the North of Westeros, Sansa became Queen of the North. The Unsullied, led by Grey Worm, set out for Naath to protect Missandei’s people, despite her death in episode 4. Jaime and Cersei Lannister died under the rubble of the Red Keep in each other's arms.

Now that we've had (a little) sleep, we can finally process the fact that our favorite show has come to its end.

And we're ready for the memes. Keep scrolling to hear what the internet has had to say about the big finale!

Sure, she burned down a whole city, but we've been rooting for this girl since the beginning.

We're not crying, you are.

Okay, so it was probably for the best, but we couldn't handle Drogon's reaction when he realized that his mom was dead.

We're hoping that one of the planned spin-offs will fill us in on what happened when Drogon carried Daenerys' body away.

We won't be able to get a decent night's sleep until we know.

Hey, at least Varys was justified.

But that kind of makes his death even more heartbreaking...

There's another character that deserved better too...

We've been racking our brains trying to think of ways that Jamie might have survived the rubble but, no, the writers really did us dirty on this one.

Didn't think that one through did you, D&D?

Some people thought that it was all just a little rushed.

Suddenly Dany was mad and Bran was king. Where did that come from?

Ayra decided to have a gap year.

We're delighted for her, but this was a little disappointing. We mean, she killed the undefeatable Night King! Surely she's needed in Westeros!

We're hoping this will mean we'll get an Ayra spin-off.

We'd love to see this girl slaying more bad buys in the West. She's a superior Columbus for sure.

We think that Ayra deserved to be Queen...

TYRION: People love stories. And no one has a better story than Bran ARYA, WHO LEARNED SHAPE-SHIFTING AND MURDERED… https://t.co/bJAQRHQRmw
— Jason O. Gilbert (@Jason O. Gilbert)1558319042.0

Did we mention that she killed the Night King?

But, in the end, things really worked out for our fave siblings.

Sansa's ending was one of our faves.

sansa @ all her haters after outliving all her abusers, getting the north's independence and being crowned the quee… https://t.co/vsVdoV8fg1
— mir⁷ (@mir⁷)1558317506.0

You go, girl! We also knew she was destined for great things.

She delivered some excellent lines in this episode.

We think this was our favorite moment in the whole episode. Lmao.

And while we are, truly, happy for Bran, his win kind of reminds us of something...

We all knew (and hated) that kid in school...

Everyone had the same reaction to Bran's outcome.

He played us all for fools.

This sums it all up perfectly.

Well, good on him, we guess!

Now we've only got one thing on our minds...

Me going back to waiting for Winds of Winter for the real story knowing damn well George is never gonna release it… https://t.co/KVetq6FcfL
— Annie Edison ♈️ (@Annie Edison ♈️)1558319004.0

How will the story really end?