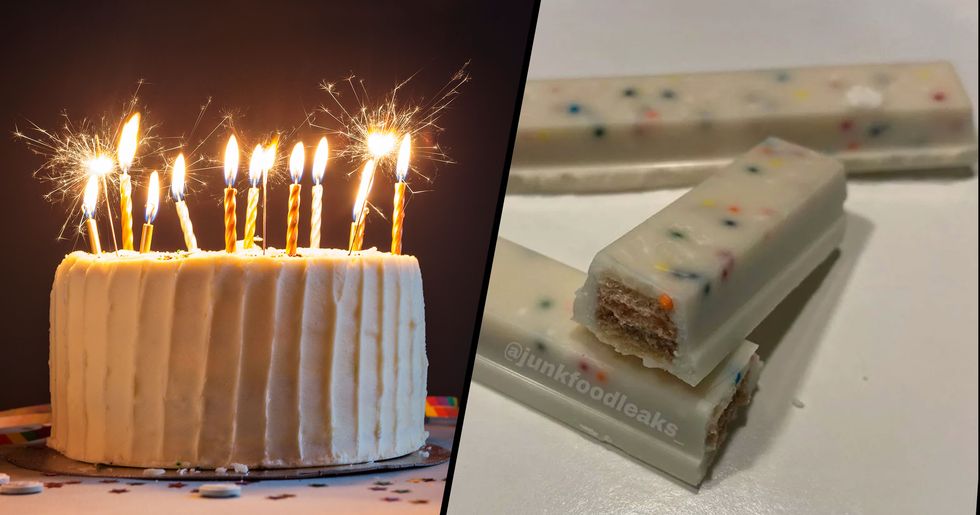 There's something about a limited edition flavor that really gets the internet's heart racing. And one brand that consistently knocks it out of the park has to be Kit Kat. For candy bar enthusiasts, the urge to collect them all can be strong. And the latest launch may be the most hyped yet.

The birthday cake flavor Kit Kat has been discovered by Instagram page @junkfoodleaks, and has received rave reviews. Now, who else is in the mood to party?

Life can be stressful, and sometimes a little treat is a perfect balm to soothe your soul.

And with so much candy bar variety out there, you basically never run out of choice.

And when it comes to variety, there's one brand that reigns supreme.

Kit Kat really knows how to bring it with the limited edition flavors.

Sure, they can be hard to track down.

But they're well worth searching for. The cookies & cream flavor basically has a cult following at this point.

Sure, some of their flavors are controversial.

Like this green tea option - we can't say we're desperate to taste it!

Some of their flavors sound intriguing.

We're keen to get our hands on this raspberry edition.

This is apparently wasabi flavored, which pretty much makes us want to run and hide.

Often, they take inspiration from other desserts.

So Kit Kat are no strangers to mixing cake with candy.

And one area in which Kit Kat excels?

Limited edition holiday specials. Their pumpkin flavor is perfect for Halloween. And their latest launch is similarly festive.

And there are certain Instagram accounts dedicated to sniffing out the latest launches.

We love a crossover episode.

But the latest discovery of Junk Food Leaks may be the most exciting the internet has seen.

A Kit Kat and birthday cake collaboration. And apparently, it's more than just a novelty.

Because the reviews are in.

And this Kit Kat has been declared absolutely delicious. It scored a whopping 9.2 out of 10 - placing it very high among the other limited edition Kit Kats.

Apparently the funfetti flavor is dead-on. But don't take our word for it - it's said to be available in early 2020. Looking for a birthday cake flavor treat available right now? Scroll on to see the much-hyped Wendy's launch.