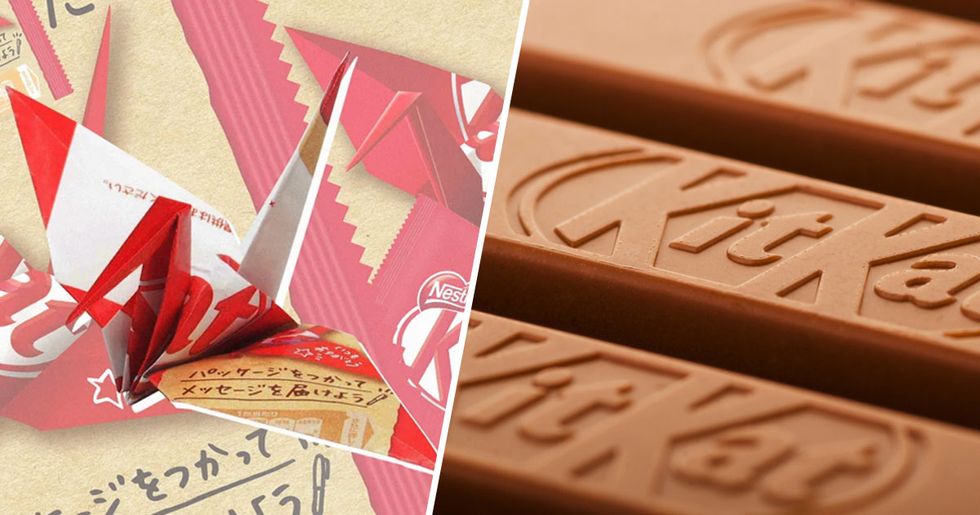 Back in January, Nestle pledged that they would aim to go completely plastic-free with their candy bars by 2025.

The Japanese strand of the global KitKat brand has announced its new paper packaging this week - with this exciting development, it would seem that Nestle are sticking to their word!

The news that Nestle are taking the waste epidemic seriously is a big deal.

Why? Well, the food and drink manufacturing monster that is Nestle contributes a significant amount to the global nonrecyclable waste each year. If Nestle goes plastic-free, it will make a massive difference, globally.

I'm also excited about this story because I love KitKats and the new packaging is really cute.

Keep scrolling to learn all about it.

There's something timeless about the milk chocolate wafer bar. Dip it in your drink, stick it in your ice-cream sundae, or eat it as it comes.

That's right, Kitkats have been around for a while. First invented in Britain in 1935, the chocolate wafer candy bar is now sold in sixteen different countries. The biggest marketplace for Kitkats is in Japan, for sure. KitKats first hit Japanese shelves in 1973 and it's there that the classic British snack really took off.

We want a snack a that a "man could have in his lunch box for work."

British chocolatier, Joseph Rowntree, who ran Rowntrees of York placed a suggestion box on his factory floor. It was here that one worker placed a request for a chocolate bar that a man could take in his lunchbox for work. Rowntree thought that the idea was just fantastic and there the idea of the Kitkat was born.

When was the last time that you had a KitKat?

Sold in sixteen different countries worldwide, it's not hard to get your hands on one. In 2016, Nestle reported that an impressive 650 KitKat bars are consumed every second globally.

Since the dawn of the Kitkat, the target market for the candy bar has been the worker. Since the suggestion was put into that suggestion box sometime around 1934, the KitKat has been the chocolate bar to have on your break. I can assure you, I will certainly be running out for a Kitkat on my break today.

What makes a KitKat the breaktime candy of choice?

Is it simply because they have drilled it into us through their marketing campaigns? Is it only because they told us that Kitkats are for break time, or is there something more to it?

Unless you're a total loony-tune that just goes right in there and bites the bar without individually snapping the sticks, you break the KitKat up.

Maybe there's something psychological about it...

There really is something relaxing about breaking your chocolate wafer bar into bitesize fingers during your break time - something that Nestle doesn't let us forget to do with their advertising campaigns. Globally, the slogan for KitKat is: "Have a break...Have a Kit Kat!," but in the U.S we're special...

Our KitKats are owned by Hershey's.

Rumor has it that Kitkats taste better everywhere else. Next time you're on vacation somewhere, get yourself a Kitkat. Heck, vacation is technically a long break... so get yourself loads!

Japan is the place to try all of the wacky KitKat flavors.

The immense popularity of Kitkat candy bars in Japan has led to a bizarre movement. Although Britain (the birthplace of the Kitkat) have dabbled with a few different variations of the original: orange, mint, dark, white... Japan has introduced flavors that you wouldn't have thought up in your wildest dreams.

Now, I'd heard that Japan had a variety of green tea flavored Kitkats - but milk tea? Apparently, it's a white chocolate version of the regular Kitkat with a florally, sweet taste that is very similar to that of English breakfast tea. Amazing, right? I mean that's some Willy Wonka magic right there.

A banana-flavored KitKat, you say?

I love bananas and I love Kitkats. But am I down for a banana-flavored Kitkat? I'm not sure. They're only available in Japan right now anyway... of course. They're described on the Nestle Japan website as "banana custard flavor." I'd definitely try it... why not?

I mean, they don't worship them or anything, but they do take them outside the realm of the "lunchtime snack." See pictured, a KitKat "Chocolatory" boutique shop in Tokyo.

Japan seemed like the perfect place to introduce the plastic-free packaging.

Seeing as Japan are the leading global players in the innovation of the KitKat, it made perfect sense that Nestle decided to introduce the new paper packaging there.

Nestle going plastic-free is massive for the global footprint.

The company has promised to have 100% recyclable packaging by 2025. Even just cutting the plastic from Kitkats in Japan is a really big deal. With over 4 million Kitkat bars sold in Japan every day, going plastic-free will have a big impact. According to ItsNiceThat.com, this will cut down about 380 tons of plastic each year.

The possibilities are endless...

If you think about it, Nestle owns quite a lot of the packaged goods that we see on the shelves. Along with candy bars, Nestle owns coffee, tea, breakfast cereals, water, baby formula, dairy products, ice cream, pet food...

If Nestle made all of their products out of recyclable materials...

It could make real change. Last year, Nestle made $21.7 billion U.S. dollars in drinks alone. They did not reveal how much plastic that means they created/how much plastic then ended up going to landfill, but you can imagine...

I mean, sure, we can all do our bit and recycle within our homes but some things can't be recycled. We're not going to stop buying the products that we love - and, besides, some of these products are necessities (like Kitkats obvs.) But if the companies behind the products step up and make the packaging recyclable from the beginning, there is no issue.

Chocolate bars are in plastic wrappers for a reason.

The reason that this hasn't happened before, and why they're only trialing the paper packaging in Japan (where Kitkats are so popular), is because plastic sells. The bright, shiny packaging that we are so accustomed to appeals to us even if we don't realize it. The glossy packets catch our attention and draw us in. Paper wrappers with their less impressive matte finish do not really appeal to the consumer as effectively.

Which is why Nestle has come up with a neat idea.

The paper packaging will also incorporate instructions that will teach you how to turn the wrapper into origami. You will be able to turn the paper wrapper, post-snack, into a classic origami crane. So not only will you take a break to eat your snack, but you will also be able to take a tranquil moment to make yourself a neat bit of paper art.

Not only is the paper recyclable...

But you might be tempted to keep hold of your garbage for a little longer anyway! The origami idea means that we will learn to appreciate our trash. My mum used to always fold her potato chip packets into little bows, I guess this is sort of similar.

Will others join the bandwaggon?

KitKat has introduced paper packaging in Japan instead of regular plastics. This is a good start to declutter the p… https://t.co/0QVNnvSITq
— P Shrikant (@P Shrikant)1568126171.0

Hopefully, this move from Nestle will give all of the other global giants a nudge. Who knows, by 2025, plastic could be a thing of the past!

But, eh, maybe we'll be turning all of our trash into beautiful origami art! Want to read more about Kitkats? Of course, you do! I could read about the wonderful wafer chocolate-fingered candy bar all day. Scroll on to read about the woman who recieved a defected Kitkat bar and then made loads of crazy demands to Nestle. It's quite the story!