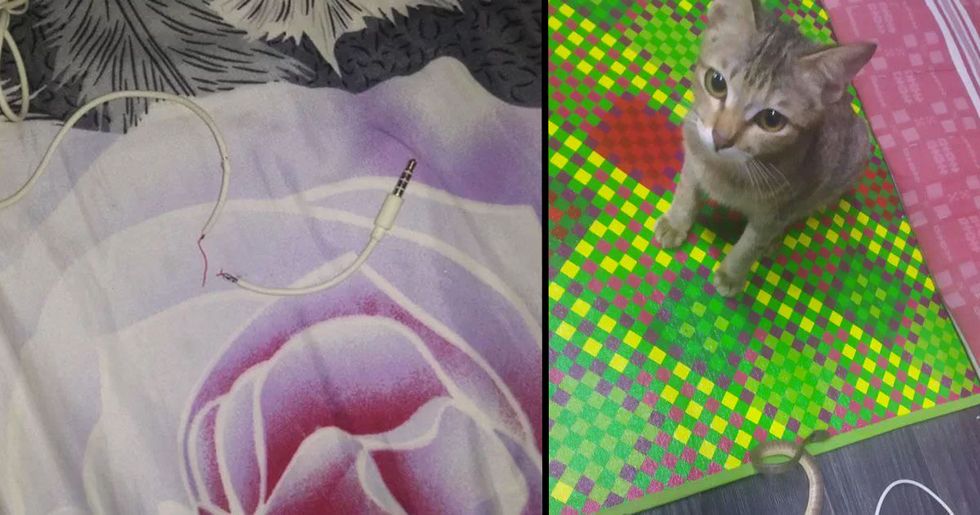 It’s a familiar story for most of the cat-rearing community. A certain treasured or expensive item goes missing, you check frantically in the places that you last remember seeing it: under the bed, on the table, behind the sofa. Then, as you meet the amber gaze of your favourite feline, you realize it’s been taken, and is most likely deteriorating in a hole some six gardens away or, in the case of Haryanto and his cat, snapped in two at the foot of the bed.

There’s little one can do in situations like these, however, on occasion, your little pet will leave you a consolatory present - more often than not, something dead. Keep reading to hear Haryanto's story.

Some stories are absurdly cute.

And this is very much one of them. We hope you’re sitting comfortably.

And proud kitty-owner, Haryanto, was sitting on his bed with his little feline friend.

The kitty was busying itself.

Before we go on with the story, just look at this little thing.

And he looked down to find his earphones snapped in two.

The cat had killed the worm for its owner.

Just as a good kitty should.

But this was an expensive worm, and Haryanto was not best pleased.

Haryanto took sternly to his cat and gave it a telling off.

The cat was distraught.

Confused as to why its beloved owner was so upset with its diligent work.

So the little thing ran away.

It took to the streets on a quest to right its wrongs.

The cat didn’t return for a full hour.

As the minutes ticked by, Haryanto must have wondered what it could be up to. Maybe it was in trouble? Perhaps it was lost?

But, eventually, the cat returned.

Baring with it, a small apology gift.

It had found a small snake,

Which it offered up to Haryanto as replacement worm.

Not quite as effective as the original pair of earphones.

But it’s the thought that counts.

Haryanto laughed and the two made amends.

We hope he kept the snake...

As people all over the internet had their hearts warmed by the antics of Haryanto’s cat.

You can’t avoid a good viral story about cats without the obligatory meme.

Although we're not sure how well this holds up.

Aside from this story...

Cats have been known to perform amazing feats of intuition and bravery.

Be it predicting the future, learning piano, or saving their owners. We couldn’t find images of all of them, but we thought we'd share a few with you now.

This is Holly, the pilgrim.

Holly, a Floridian cat, lost on Datona Beach, managed to navigate the 200-mile journey home, returning back at the house in West Palm two months later.

She showed up half starved, with bleeding paws from traversing the concrete.

But a microchip confirmed that it was indeed Holly.

Move over, Keyboard Cat, there’s a new pianist in town.

Nora managed to "learn" the piano.

Oscar, the angel of death.

Oscar isn’t the kind of cat you want to cozy up to. He’s a furry harbinger of doom.

He lived in a nursing home in Rhode Island.

And would predict the next resident who was about to die. "The patients he stayed with would often die within a few hours. Oscar would offer comfort and attention to the dying patient and family members who were in attendance."

This cat from New Jersey, would stand up to anything.

"The owner took pity on the poor bear and called her watch cat indoors so the bear could be on its way."  Woah.

Pudding managed to save her owner, Jung, from a seizure.

Jung had a diabetic seizure while she was asleep.

So Pudding ran to her son’s room and woke him up so that he could alert the ambulances.

So next time you choose a pet.

Consider that a cat could save your life. Or, at the very least, bring you some small slice of joy.