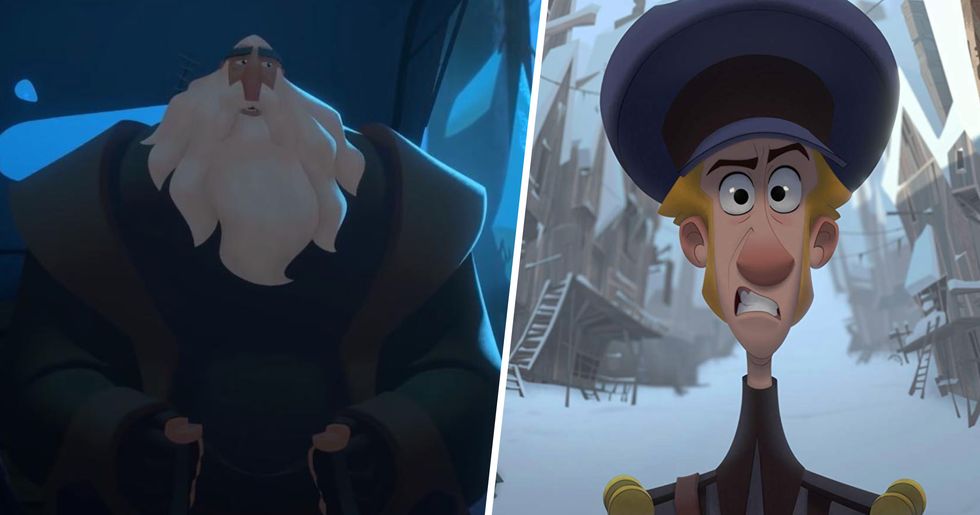 The festivities are truly upon us which means only one thing... Christmas movies. Kicking back and watching a Christmassy flick is one of the best ways to get into the holiday spirit, with most of us tending to stick to the classics when choosing what to watch. Fancy a family-friendly classic? It has to be The Grinch or Elf. Maybe a laugh out loud comedy? Home Alone is a fantastic choice. Or is romance your thing? The go-to has to be Love, Actually.

Whatever your preference is, there's no doubt that we usually gravitate towards the same selection of Christmas movies. But sometimes, out of the blue, a brand new festive movie can come along and take the world by storm, and that's exactly what's happened in the case of Netflix's Klaus.

The animated Santa origin movie has been proving very popular with viewers, so much so, that it's been hailed as one of the best animated movies of the year.

Wondering what makes it so special? Keep scrolling to watch the trailer...

In the lead up to Christmas, Netflix has truly been treating us.

The streaming giant has added a whole host of festive flicks to the site.

And we have to say, there's really something for everyone in the canon.

From beloved classics like The Grinch to newer (very cheesy) additions like The Knight Before Christmas, we have been spoilt for choice.

Though we have to admit...

When it comes to choosing a Christmas movie, we tend to stick to the ones we already know and love, making it harder for new additions to rise in the ranks.

But there's a hidden gem in Netflix's Christmas movie selection.

Netflix's original animated movie, Klaus, has truly stood out from the crowd and has defied the odds - soaring to popularity on the site.

Klaus landed on the site on November 15.

And not even a week later, it has already earnt an impressive title - hailed as one of the best animated movies of the year. But, when you find out more about the movie, you'll completely understand why it has won over the hearts of critics.

Klaus is the passion project Despicable Me cocreator, Sergio Pablos.

Pablos has worked on huge hits such as Tarzan and The Hunchback of Notre Dame, but Klaus is one very close to his heart - marking his directorial debut. He tried getting the 2D animated movie made on and off for about a decade, when finally, after getting passed over by big studios, Netflix acquired the global rights to the film 2 years ago.

When he proves himself to be one of the worst postmen at the academy, he is given a brutal ultimatum: start a post office in the frozen island of Arctic Circle or be cut off from the family's fortune.

So, he's shipped off for life in the arctic circle, though it doesn't take long for him to contemplate giving up.

That is, until he finds an unlikely ally in a local teacher named Alva and discovers Klaus, a mysterious reclused carpenter who lives alone in a cabin full of handmade toys.

The unlikely friendship between Klaus and Jesper helps transform a village consumed by internal fighting.

And of course, Jesper's self-centered ways slowly begin to disappear when he learns the true power of kindness and selflessness.

If you hadn't already guessed, the movie is an origin story for Santa Klaus.

As Jesper and Klaus donate the old toys to people around the town, they quickly become the talk amongst the kids.

Many have hailed the movie as a new classic.

But be warned: it's a real tear-jerker.

Those who have watched have said it hugely pulled on their heartstrings.

A number of celebs have lent their voices for the festive animation.

But the true magic of the movie comes from its stand-out animation.

Fans of traditional style animations will marvel at Klaus. The movie utilizes special lighting tools to give an added depth to the 2D characters on-screen.

Pablos revealed the animation is all hand-painted.

It may look like CGI but the hand-drawn characters give us a whole other level of appreciation for the festive spectacle.

And there's a huge reason why it bears resemblance to Disney classics...

Pablos and Netflix's director of character animation James Baxter, joined forces to bring their years of experience of working together for the house of the mouse to create Klaus. Several other of the movie's animators have also worked at Disney, bringing their expertise to the playing field.

The movie's animation has drawn in significant praise.

So much so that the movie was hailed as one of the best animations of the year - and considering it only landed on the streaming site a few days ago - that's a pretty impressive achievement.

The heartfelt movie has truly revived 2D animation, and with breathtaking pay off.

Pablos may have waited a decade for his movie to get the air time, but it seems it was completely worth the wait.

People have been flocking to Twitter to urge others to watch.

From its incredible visuals to its endearing core, the movie can be enjoyed by all ages.

Klaus is available to stream on Netflix now. Want to know what other original festive movies Netflix has to offer? Keep scrolling to take a look.