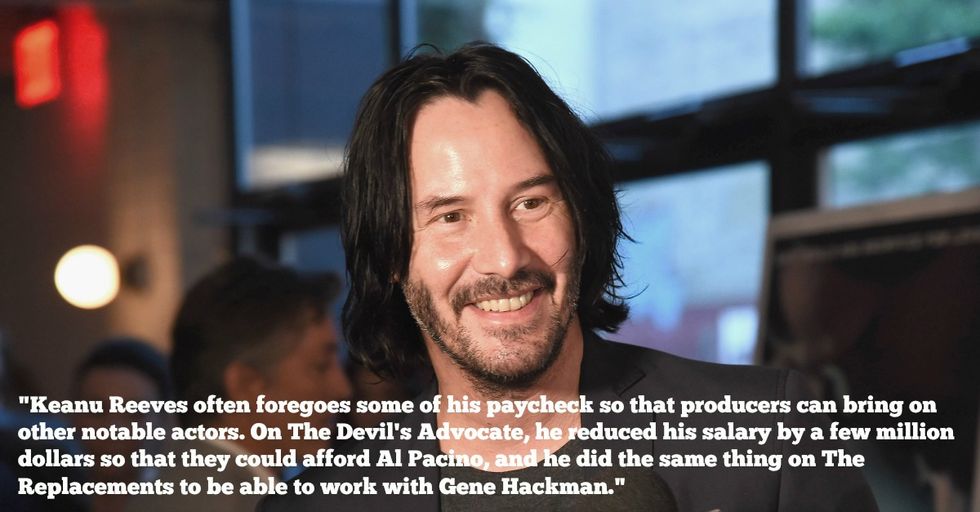 You know that old saying, "You learn something new every day"? Well, in my case at least, that's completely bogus. In fact, there are times when I'll go weeks without learning anything new. It's even gotten to the point where my brain is now so hungry for new information that it feels like it's about to shut down completely at any moment. I blame college, which forced my brain to retain so many numbers and bits of information that it finally just got fed up and refused to work by my senior year.

Luckily, I've uncovered 30 completely new and interesting tidbits that are so mind-blowing that you won't even care that you're learning. From ladies being badasses to celebrities being bros to life-saving animals, these facts will give you a new perspective on the world and keep your brain from completely atrophying.

Or, it'll at least hold it off for one more day.

Why doesn't every company do this? To quote Kelly Kapoor from The Office: "Why is it okay for smokers to take breaks all the time? If I want to go outside and hang out once an hour, then I’ll just take up smoking. I’ll do it, I don’t care."

As someone who will never be able to afford front row seats to any concert (except maybe Rebecca Black), I really appreciate this gesture. Hit me up with some free tix, Billy!

You did NOT want to mess with Carrie Fischer. I'm sure her friends were glad they had her on their side.

And all this time I thought that birds were the most pointless pets out there! Good boy, Willie!

This is actually a pretty heartbreaking story. To be forced to go through life without laughter would be a fairly dark existence.

This just goes to show you how easily people can be fooled by good reviews. I, for one, hope he charged those people $50 bucks each for a frozen TV dinner.

While this is an awesome move by Kate, I must admit that I wouldn't be embarrassed in the slightest to give my fake Oscar speech in front of others. In fact, I would insist upon it, and demand that they applaud, cry, and have pre-recorded "wrap it up" music ready so I can get the full effect.

Sure, a $5 tip on what was probably a $15 drink is still a decent tip, but this is Vegas, Michael. Oh, and you're a billionaire.

Yet another reason why Keanu Reeves is the coolest, most generous guy in Hollywood. I don't even care if his movies are terrible. I see them to support a genuinely nice guy.

This is straight out of a Liam Neeson movie! If you're going to put a hit out on your wife (don't), you should probably take into account what the chances are of this happening.

Mr. Rogers was one of those people who did kind things for the sake of being kind, not in an effort to gain publicity. We need more people like him in this world.

It's hard to imagine tough-guy Eminem being such a sensitive, loving father, but it sure does warm my heart. That Marshall Mathers is really just a big 'ol softie!

I love a good chain restaurant as much as anyone, and it's awful to think about this poor old lady getting trashed online simply for being excited about a good meal. Anthony Bourdain was truly a class act.

This is one of those facts that makes total sense but you just never put it together in your head until now. It also really, really makes you want a donut.

Yet another reason why Beethoven was an absolute genius. Thanks for making me look idiotic in comparison, dude.

''With suicide comes all the guilt of people around you thinking they could have done something,'' Jolie said in an interview with The Herald. ''With somebody being murdered, nobody takes some kind of guilty responsibility.''

This is actually a pretty great way to make an unpleasant part of getting older much more tolerable. Honestly, I would be willing to get a colonoscopy just to be able to hang out with these three Hollywood icons.

Can't you just imagine this side-splitting scene? "Stick 'em up!" "No, YOU stick 'em up!"

I seriously don't understand why this law is not standard everywhere. Too many animals are destroyed for absolutely no reason. Let this be another reminder to always spay and neuter your pets.

And yet, in America, McDonalds is a popular place to hold children's birthday parties. Who didn't love crawling through those disgusting tubes in the Play Place?

Talk about generous friends! It was obviously worth it, though, because it allowed her to write one of the most important works of fiction of all time. This fact makes me want to yell at my own friends for being completely useless.

ATTENTION RESEARCHERS: DO NOT DO THIS. Excuse me while I sob uncontrollably for a few minutes...

Am I the only one who remembers the lyrics to "White and Nerdy" MUCH better than the original? Maybe it's just because they spoke to me on a personal level.

So THAT'S why I cry like a baby and then proceed to complain for weeks after getting even the tiniest of paper cuts! It's not because I'm dramatic, it's the PAPER'S fault!

As a soon-to-be first-time parent, this fact couldn't have come at a better time. I now feel justified to become one of those hands-off parents that just lets the kid do whatever they want.

That is one impressive fart. This fact makes The Princess Bride even more of a classic. RIP, you gentle, gassy giant.

This girl is definitely going places. Apparently, The Girl Scouts of America is totally cool with this selling technique, and Lei and her Mom returned to this spot the following weekend as well.

If I've said it once, I've said it a hundred times: We don't deserve dogs. They're too pure for this cold, cruel world.

This is seriously extraordinary. Not only was this a completely selfless act by Washington, the fact that his generosity resulted in such a successful career is truly incredible.