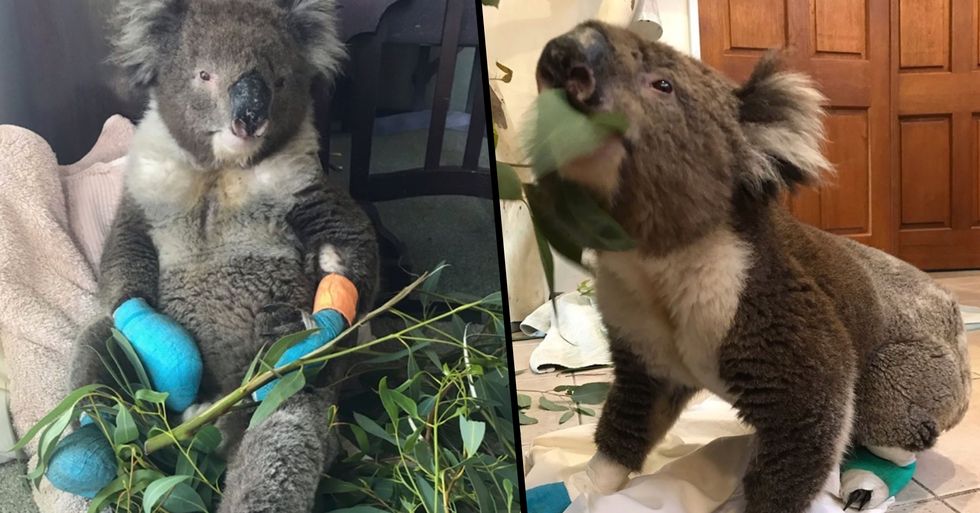 But, today, a positive story has emerged amidst all the tragedy - a tiny koala with badly burned paws seems well on the way to recovery. Read on for Billy's inspiring story.

There have been fires reported in every state, but New South Wales is truly taking a beating by bush fires and is undoubtedly the hardest hit. 5,900 buildings have now been destroyed.

But there has been some hope...

The story of one rescue koala, Billy, has people feeling heart-warmed amid the tragedy.

This cutie was discovered clinging to a tree in Adelaide Hills, Australia, with 4 very badly burned paws. Some good Samaritans picked him up and took him for medical care.

Lucy and Adam Francis of Adelaide and Hills Koala Rescue shared his story on Facebook.

On Christmas day, they shared, "Billy has burns to all of his paws and is receiving daily treatments. He will be in care for some time as his burns heal and is monitored closely, as secondary infections from the burns can be what causes a koala’s death, rather than the burns themselves."

"We made a makeshift enclosure for him in our kitchen so we could be close to him always."

"We used a camping mattress for him to sit on and placed a pillow behind him for him to lean back on, as it was difficult for him to sit in a normal koala position. He was clearly in shock, frightened, and covered in soot and ash from the fire," she told The Dodo.

Billy had a truly endearing personality.

"We have a very close relationship with him, and he lets us handle him as we need to and clearly trusts us, despite still being very much a wild koala."

Billy is clearly in good hands.

"His personality is so gentle and calm, even when we have to rub cream into his blisters and burns, or administer his vitamin mixture which we’re really sure he hates. It’s like giving a very furry, reluctant child their medicine."

And despite his ordeal, he's never lost his appetite.

The Facebook page has posted many cute snaps of Billy munching eucalyptus. And even better? He seems set to make a full recovery. "We can’t wait to see him fully recover, although he will leave a very big Billy-shaped hole in our home and in our hearts." Billy is not the only koala to have a happy ending. Scroll on for an adorable makeshift shelter created for the cute creatures.