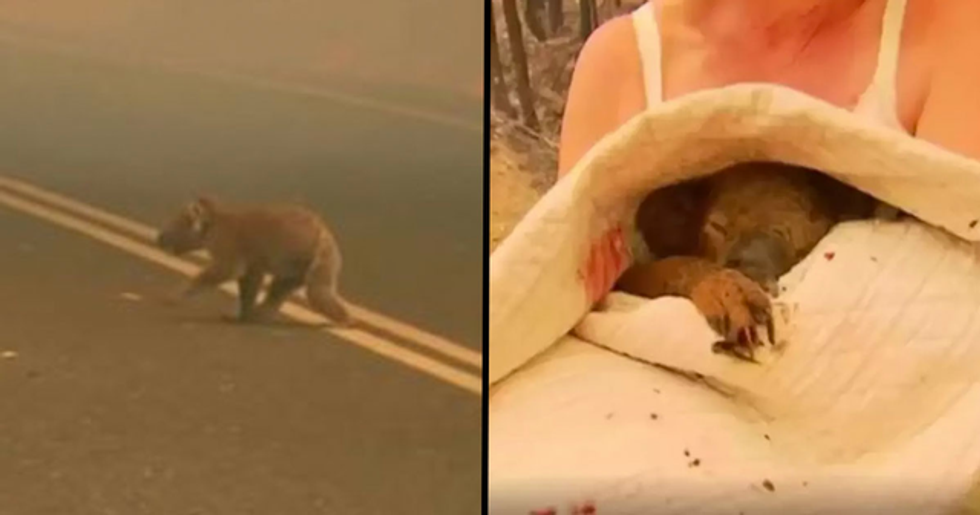 Koalas Functionally Extinct After 80% of Habitat Destroyed by Wildfires

Koalas have been declared as "functionally extinct" by experts after formidable bushfires have wreaked havoc upon their natural habitats across New South Wales and Queensland in Australia for the last few weeks.

The marsupials, which are native to Australia, have faced a heartbreaking decline in numbers as a result of the bushfires, which many experts fear they will never fully recover from.

Bushfires are one of the harsh realities of living in Australia...

Every year without fail, Australia experiences scorching temperatures over the festive season, with highs of forty-eight degrees Celsius being reached around the country.

The BBC reported that close to fifty bush fires continue to burn in populated coastal and inland regions to the city's north. Authorities say 468 homes have so far been destroyed since blazes flared up on 8 November, and thousands have been evacuated.

Authorities and volunteers have been working tirelessly every year to help as many animals as possible...

But it isn't always enough.

It is currently estimated that over 1000 koala bears have died, with an approximate 80% of the fireground footprint said to have encroached on prime koala habitat.

The fires have wreaked havoc on their natural habitats...

And as a heartbreaking result, experts believe that Koalas are now functionally extinct in the wild.

What does functionally extinct actually mean?

According to the BBC, this term is used to describe an animal population with so few pairs that they're unlikely to produce a new generation, and will gradually just die out.

The future of Koalas is an uncertain one.

Deborah Tabart OAM, chairman of the Australian Koala Foundation, was the one who first came forward with the bleak prediction.

She believes that Koalas will no longer be able to survive in the wild.

Speaking to Daily Mail Australia, Tabart said, "If we combine all of the estimated deaths of koalas in the bushfires, there could be 1,000 koalas that have been killed in the last two months."

The fate of their habitat has been hanging in the balance for some time now...

And the bushfires, on top of a prolonged drought and deforestation, have now wiped out over eighty percent of the natural habitat.

And even the koalas who have survived the fires don't stand a great chance.

Tabart explained that eucalyptus trees - the main source of food for a koala - can take months to grow back after such severe fire damage.

She has now urged the Australian Prime Minister, Scott Morrison, to take action.

And is calling for him to enact the Koala Protection Act, which was written back in 2016 and focuses on protecting the habitats and trees in which koalas dwell, including habitats that are empty.

Amid all the bad news, donations have soared.

Within weeks, donations for koala hospitals surpassed $1m AUD (around $600,000 USD), making it the country’s second-largest fundraising campaign since GoFundme was launched there in 2016.

The Australian community has come together to help their native animals...

And the blazes, that have so far killed 6 people, ravaged hundreds of homes and scorched about 1.5 million hectares of land since October, show no sign of slowing down. Our thoughts go out to everyone affected in these devastating fires.