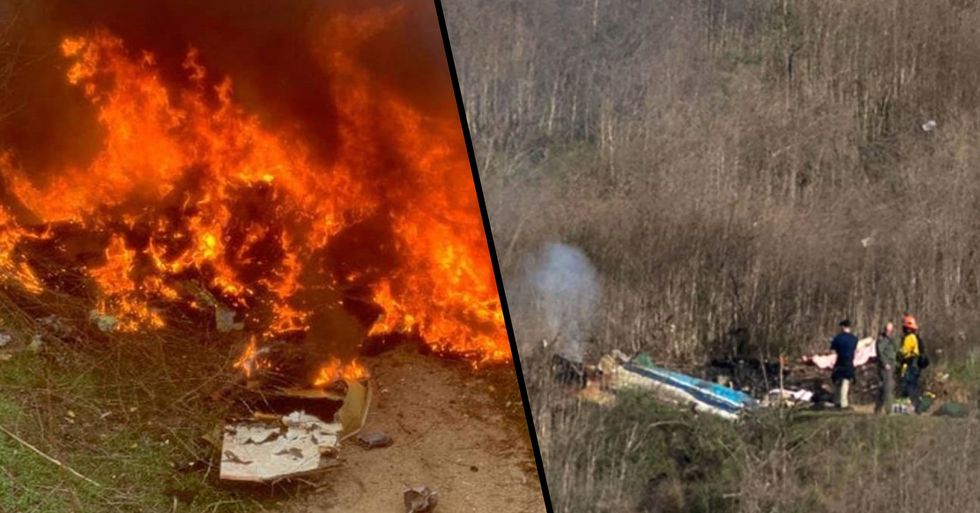 The world was left devastated by the heartbreaking news that legendary NBA player, Kobe Bryant, died in a helicopter crash on Sunday morning. He was just forty-one-years-old.

All 9 victims of the tragic crash have now been named as the world continues to mourn all the casualties. But as investigations continue into the cause of the helicopter's failures, images from the crash site have emerged and they are harrowing...

Keep scrolling to see them.

But the world woke to tragic news.

Shortly after the news broke, the city of Calabasas released a statement:

"With great sadness that we learn of the death of Kobe Bryant and four others in a helicopter crash." "The aircraft went down in a remote field off Las Virgenes around 10 AM this morning. Nobody on the ground was hurt. However, we have now learned that 9 individuals were killed.

Though the exact details haven't been revealed as of yet, reports state that there might have been something wrong with the engine which prompted a fire.

These harrowing images prove just how devastating the aftermath was.

It has been described as a "ball of flames," by TMZ.

Investigators have stated that no one would have been able to survive such a blow.

Now all that remains is debris while officers patrol the area.

This story develops as investigations continue.

In the meantime, many have been leaving tributes for both Kobe and his daughter. Keep scrolling to see how others are celebrating the lives of the victims.