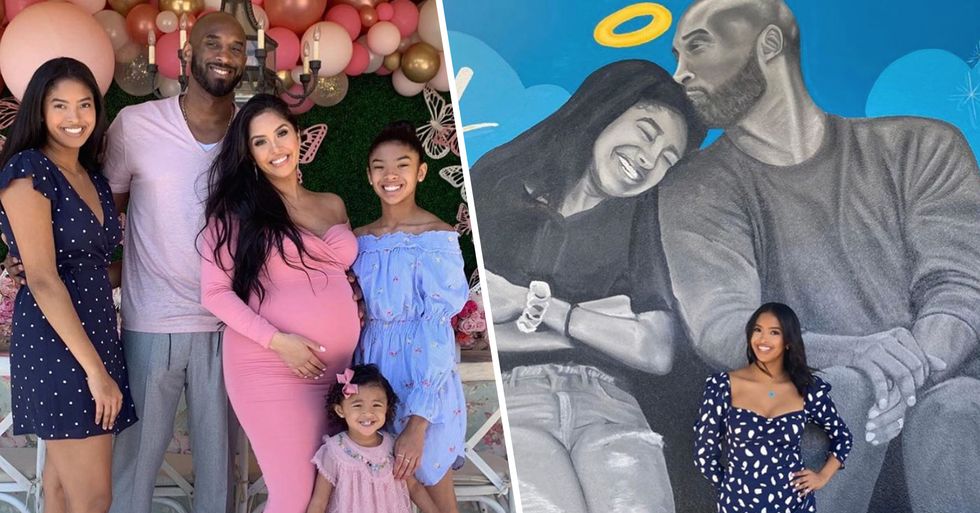 Kobe's family has understandably been struggling with the deaths - and they have frequently taken to Instagram to pay tribute. And the latest comes from Kobe's oldest daughter, Natalia.

For those of you that aren't aware, Kobe Bryant was a legend.

In January, the world's heart was broken...

Kobe Bryant was tragically killed in a helicopter crash on Jan 26. The NBA star's private helicopter crashed in Calabasas at around 9:45 am local time, TMZ sports confirmed.

During a press conference, it was confirmed there were no survivors...

TMZ Sports reported that Gianna, aged thirteen, tragically died in the crash. It is thought that the father and daughter were on their way to the Mamba Academy for basketball practice, nearby Thousand Oaks.

Kobe and Gigi leave behind their wife/mom and their daughters/sisters - Natalia and Bianka, and their newborn, Capri.

Tributes quickly came flooding in, with Barack Obama reiterating that Kobe was a "legend."

And Whoopi Goldberg also emphasized how much of a hero he was...

Viola Davis was also amongst those who paid tribute to Kobe...

And a host of other sports personalities sent their condolences to the family...

And Usain Bolt too...

Kobe's wife, Vanessa, recently opened up about her tragic loss...

Two weeks after their tragic deaths, Kobe and Gianna Bryant were laid to rest...

As well as the private funeral, Vanessa revealed the finalized plans for a public memorial service for Kobe and Gianna...

'2' is the number Gianna played in basketball...

And the memorial proved to be as emotional as expected...

"First, I'd like to thank everyone for coming today," she said tearfully. "The outpouring of love and support my family has felt from around the world has been so uplifting... I'd like to talk about both Kobe and GiGi, but I'd like to start with my baby girl first."

This was clearly extremely difficult for Vanessa to open up about...

The crowd cheers for Vanessa as she struggles to get her words out. "My baby girl, Gianna Bryant is an amazingly sweet and gentle soul. She was always thoughtful, she always kissed me goodnight and kissed me good morning. On a few occasions when I was absolutely tired from being up with Bianka and Capri, I thought she had left for school without saying goodbye, so I text and say, 'no kiss?' Gianna would reply with, 'Momma, I kissed you, but you were asleep and I didn't want to wake you'."

"But I know she loved her momma," Vanessa then said. "She would always tell me how much she loved me, and she was one of my best friends. GiGi would have most likely become the best player in the WNBA... she would have made a huge difference for women's basketball and she was motivated to change the way everyone viewed women in sports."

"I cannot imagine life without her"...

Vanessa then went on to speak of her husband. "Kobe was known as a fierce competitor on the basketball court, the greatest of all time, a writer, an Oscar winner, and the Black Mamba... but to me, he was Kobe-Kobe, my booboo, my bae-boo, I was his Vee-Bee, his Queen Momma."

Vanessa went on to describe the relationship she had with Kobe...

"We balanced each other out, he would do anything for me," she went on to tearfully say. "I have no idea how I deserved a man who loved and wanted me more than Kobe. He was charismatic, a gentleman, he was loving, adoring, and romantic... We really had the most amazing love story. We loved each other with our whole beings, making a beautiful family and raising our sweet and amazing girls."

"God knew they couldn't be on this Earth without each other"...

"He had to bring them home to heaven together," Vanessa concluded her speech with: "Babe, you take care of our GiGi, and I got Nanni, BiBi, and Coco. We're still the best team, we love and miss you, Booboo and GiGi. May you both rest in peace and have fun in heaven, until we meet again one day."

Her speech was so difficult to watch...

And it is utterly heartbreaking to see the pain she is currently in.

All of the Bryants are struggling immensely at the moment...

The family is making tributes in their own unique and personal ways...

And Natalia has just paid the sweetest tribute to her dad and little sister.

On Sunday, Vanessa shared a photo of her seventeen-year-old dressed up and ready to attend her high school winter formal.

And, ahead of the dance, Natalia posed for photos in front of a mural painted to honor her dad and sister. Keep scrolling to take a look.

“❤️ my babies. Natalia. #winterformal," she captioned the post.

And of course, people have been quick to type up messages of support.

There's been an outpour of love for the family.

R.I.P. to all of the victims of the tragic accident.