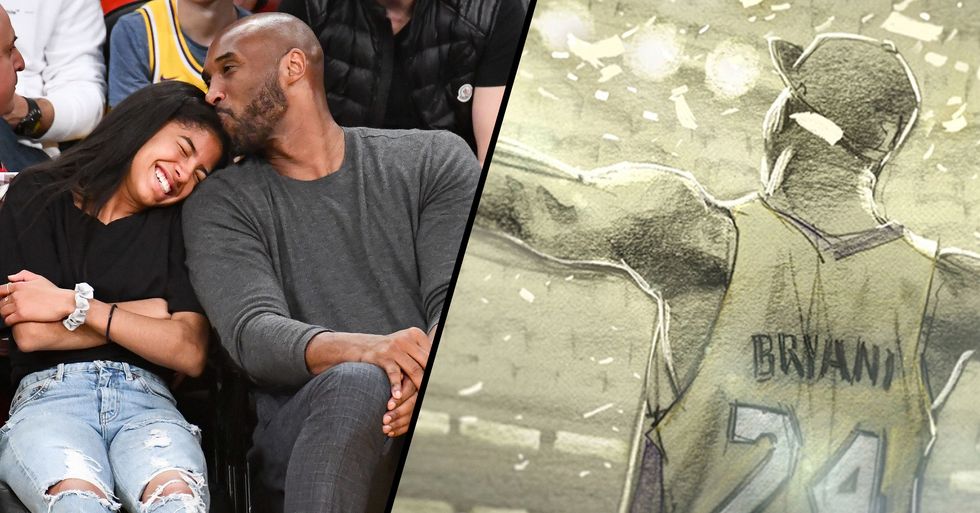 Kobe Byrant's Oscar-Winning Movie Is More Inspiring Now Than Ever

Following the horrific tragedy, Bryant's studio has re-released his Oscar-winning short movie, Dear Basketball, for fans to watch for free and it's more inspiring now than ever.

The former Lakers star and basketball legend was involved in a fatal accident when his private helicopter crashed in Calabasas at around 9:45 am local time. The aircraft - a Sikorsky S-76B - went down on a hillside just outside of the city.

Shortly after the tragedy, a press conference confirmed there were no survivors.

And we left devastated by the news that Bryant's thirteen-year-old daughter, Gianna, who was a promising basketball player herself, had also died in the crash. It is believed that they were traveling to the Mamba Academy for basketball practice, nearby Thousand Oaks.

When the aircraft took off, weather conditions were extremely foggy.

Local police had also grounded their helicopters due to the poor weather.

Prior to the fatal crash, the pilot asked air traffic controllers for a "special clearance."

According to the BBC, the aircraft circled in the air for twelve minutes before being given the clearance. The pilot then asked controllers for "flight following," assistance given to helicopters to avoid collisions, but was told the helicopter was flying too low to be picked up by radar, the BBC reports.

Just minutes later, the pilot said he was "climbing to avoid a cloud layer."

The helicopter then climbed and began a left descending turn, according to radar data, before communication was lost "consistent with the accident location," the BBC reports.

All of the victims of the devastating accident have now been named.

Bryant leaves behind his wife, Vanessa, and their daughters – Natalia and Bianka, and their newborn, Capri.

We can't imagine what Vanessa must be going through having lost both her daughter and husband.

Investigators are currently working to determine the official cause of the crash.

They are expected to be focusing on the weather conditions at the time, which were said to have been extremely foggy, as well as any possible mechanical failures that may have taken place.

And it highlighted the true extent of this horrific tragedy.

Tributes have poured out for the victims.

From celebrities to fans, the sheer scale of tributes proves just how beloved Bryant was and how much he will be truly missed.

Artists have also been hard at work to pay tribute to the late star.

A whole host of touching murals have emerged all over the world.

Shortly after the devasting news broke, fans flocked to Bryant's own home to pay their respects...

And an emotional memorial quickly formed, with many laying down purple and gold flowers - the signature colors of the Lakers.

And of course, many mourners rushed to the STAPLES Center, home of the LA Lakers, to pay their respects.

Fans went against police advice not to turn up to the venue, which at the time was hosting the 62nd annual Grammy Awards.

It's clear Bryant has a huge impact on his fans.

And many couldn't hold back tears at the star's vigil at both the crash site and outside his home.

As fans look back on the sports icon's greatest moments, many have been rewatching his 2017 short film, Dear Basketball.

The animated short film, written and narrated by Bryant, earnt the star an Oscar for Best Animated Short Film at the 2018 Academy Awards - making him the first NBA player to ever win the coveted award.

Bryant's studio have released the movie to watch for free following his tragic death.

The movie is based on a letter Bryant wrote to The Players’ Tribune in November 2015 announcing his retirement from basketball. At the time, the film was branded as "inspirational," with one critic writing: "A beautifully hand-drawn animation and personal poem that is both impassioned and inspiring." But now that statement rings true more than ever.

The short saw Bryant declaring his love for the game.

At one point in the animated flick, the star says: "I fell in love with you. A love so deep I gave you my all, from my mind and body to my spirit and soul."

Following Bryant's untimely death, the short has been attracted praise once more.

Legendary actor, Mark Hamhill, who presented Bryant with his Oscar, was among those reigniting the praise for the movie.

The inspirational short will be a huge part of his legacy.

"At least he left us with this beautiful, little film that will inspire more generations in the coming decades."

R.I.P. to all of the victims of this horrific tragedy. To read more about how else people are mourning the loss of Bryant, keep scrolling.