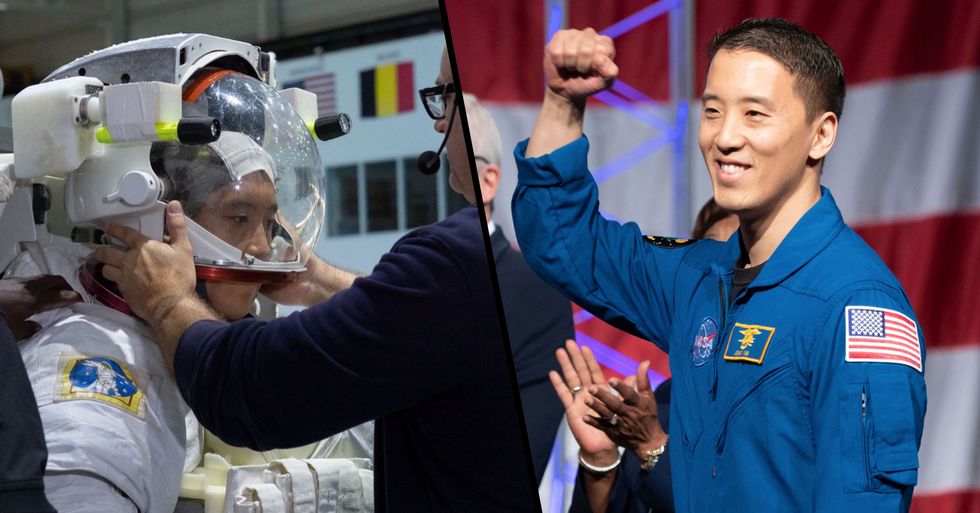 Astronauts can now spend up to half a year living in international space stations and many are sent to and from space all the time.

NASA's most recent recruit has a pretty impressive resume, and he seems to be the perfect candidate to be sent into outer space.

Astronauts spend up to 6 months living onboard the ISS.

The space station travels through space at a staggering 17,500 miles per hour at an altitude of about 220 miles, and each mission lasts around 6 months - which is the time an astronaut will spend at a time onboard.

Any time an astronaut gets out of a vehicle while in space, it is called a spacewalk. A spacewalk is also called an EVA, which stands for extravehicular activity.

Spacewalks are a regular occurrence today in 2019.

Today, astronauts go on spacewalks outside the International Space Station and now, spacewalks usually last between 5 and 8 hours, depending on the job.

It must take a pretty resilient personality to undergo one of these spacewalks for a living.

And his resume is nothing that we have ever seen before.

He is a thirty-five-year-old American-Korean and he has just been hired as a NASA astronaut.

But on top of being an astronaut...

Kim is a former Navy SEAL as well as being a Harvard medical doctor.

He is the first of his kind...

Kim, who lives in Los Angeles with his wife and children, will make history as the first Korean-American NASA astronaut to embark on assignments to the Space Station, on Artemis missions to the Moon and potentially on the first human exploration mission to Mars.

Kim said as a youngster he felt like "the epitome of that quiet kid who just lacked complete self-confidence," in a 2018 interview with Annals of Emergency Medicine

At the age of sixteen, Kim learned about the United States Naval Special Warfare Command...

"Going into the Navy was the best decision I ever made in my life because it completely transformed that scared boy who didn't have any dreams to someone who started to believe in himself," he explained.

He was kept very busy during his time in the Navy...

He was commissioned as an officer through the Navy’s enlisted-to-officer commissioning program after he graduated from the University of San Diego with a math degree in 2012.

He then served as a Special Operations Combat Medic, sniper, navigator and point man on over 100 combat missions in two deployments to the Middle East including Ramadi and Sadr City Iraq. His military honors include a Silver Star and a Bronze Star.

He specialized in emergency medicine and graduated in 2016.

Kim said he was inclined to pursue medicine after seeing his friends killed in combat - a moment that changed his career trajectory was feeling helpless in 2006 as he tried to treat a friend who was shot in the face. That friend sadly died from his wounds.

'I was happy, jubilated, excited... all these emotions,' Kim said on the moment he found out he was selected by NASA for its next astronaut class.

After spending 2 years training, Kim officially graduated on the 10th of January...

What you don’t always see are the men and women behind the scenes working tirelessly to support the… https://t.co/f6LPFqJVjg
— Jonny Kim (@Jonny Kim)1577728854.0

In the grueling training process, the group trained in spacewalking, robotics, International Space Systems, T-38 jet proficiency, and Russian language, according to Task and Purpose.

Now, he's eagerly awaiting his first assignment, which will likely be to the moon.

An incredible future lies ahead...

A true privilege and honor to walk among the @NASA Astronaut Corps with my brothers and sisters. We know there are… https://t.co/qyDdLWQt0c
— Jonny Kim (@Jonny Kim)1578947108.0

"I'm excited for the adventure," Kim said, "I think it'll be another occupation where I say, 'I can't believe I'm getting paid for doing this.'" Good luck, Jonny!