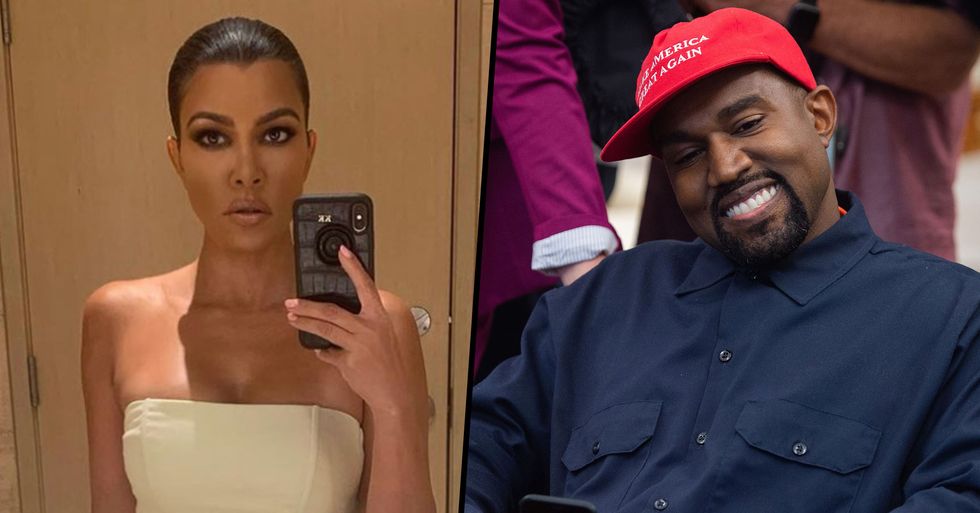 Kourtney Kardashian is at the center of a Twitter storm today after she endorsed brother-in-law, Kanye West for president.

Who remembers Kanye's alarming antics during his presidential campaign earlier this year?

Most of us do, I'm sure. But it seems that the rapper now stands a chance as people are officially voting for him to become the next president of the United States.

It all started on July 4th.

On Twitter, he suddenly revealed that he would be running for president.

But this year, he finally took things to the next level.

And in July, he hosted his first-ever campaign rally.

However, his first campaign proved to be an extremely chaotic and alarming experience.

Kanye, who was clad in a bullet-proof vest with the numbers "2020" shaved into his head, threw his rally in Charleston, South Carolina, where he seemed to whip up various policy decisions right there on the spot... including humiliating his wife and family in the process!

He firstly disclosed how he and Kim had discussed the possibility of abortion when she found out she was pregnant with North...

And she posted a lengthy Instagram story explaining how difficult it is to live with bipolar disorder and how she will do anything to protect her husband and her children.

It was, understandably, a terrible time for Kanye and his family...

So his supporters weren't surprised when he stepped down from his campaign and took some time to reconcile with his family.

Kanye's presidential campaign was gradually brushed under the carpet...

And it was replaced with the firey face-off between President Trump and Joe Biden.

But now, there's been a shift in mood.

It turns out that people are that sick of Trump and Biden's arguing that Kanye's campaign has been reignited... And he's back in the running for being president!

Okay, so Kanye is actually running as a vice-presidential candidate for the American Independent Party...

But the rapper took to Twitter to share a photo of a ballot card with his name scrawled under the write-in section, along with the caption: "Friends writing me in."

Do you think he'll actually get the chance to be the next president of the United States? Or do you think this is just yet another one of his little games?

Well, regardless of his slim chances, the Kardashians are 100% backing him.

Kourtney recently posted this on her Instagram Selfies - a mirror selfie while she sported a "Vote for Kanye" hat. She also included a link to his merch website where fans can purchase that hat for $40.

Clearly, this was Kourtney's attempt at getting her 100 million strong following to back Kanye...

Which many have dubbed as "reckless" and "dangerous".

This is showing me AND YOUR THOUSANDS OF FOLLOWERS that you do not care about anyone but yourself. VOTING is so imp… https://t.co/z0tJ6Xn6rU
— lauren (@lauren)1602813901.0

People are totally and utterly outraged at Kourtney's "irresponsible" post, and have slammed her for trying to sway people's opinions in order to gain a vote for Trump.

@kanyewest @kourtneykardash Wow! Kourtney,I thought that U were the only Kardashian that may have a little bit of i… https://t.co/D4Zr4Ty27Q
— Social Media Guru (@Social Media Guru)1602818793.0

lol did kourtney kardashian post a fuckin story on IG with a vote Kanye hat that links to his fuckin campaign website
— bailey (she/her) (@bailey (she/her))1602823248.0

So Kourtney Kardashian is a Republican and active Kanye voter it seems? Disgusting.
— Saint (@Saint)1602808989.0

Kourtney is yet to respond to the backlash.