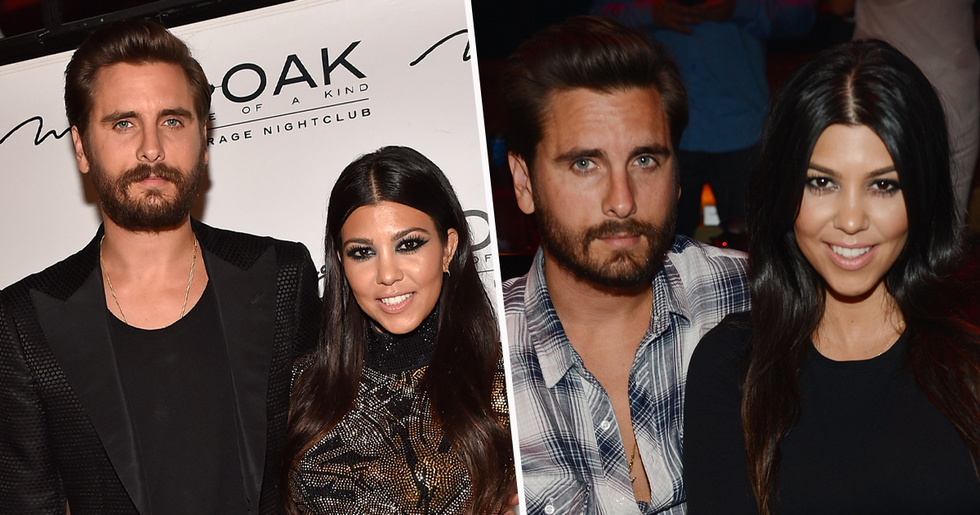 After the saddening news emerged that Scott Disick checked out of rehab just days after checking in, it seems that Kourtney Kardashian isn't coping well under the strains... at all.

After the shocking news emerged that Scott Disick fled from rehab just days after checking in...

Scott Disick rose to fame on a show we all know well...

And, during the show, Scott became well known for dating Kourtney Kardashian. Their relationship began in 2006, not long before the launch of Keeping Up with the Kardashians.

And after a bumpy road, in 2015 the on-off couple split for good.

Scott certainly isn't one to stay out of controversy...

This infamous 2010 episode of KUWTK included a scene that's difficult to forget: A ridiculously drunk Scott getting deliberate with an innocent waiter for unknown reasons and then proceeded to shove a wadded up $100 bill down his throat. Classy!

Or the time he punched a mirror in Miami...

During a disagreement with then-girlfriend Kourtney about smoking pot in their apartment, Scott's anger got the best of him and he smashed a mirror to pieces. The incident was featured on Kourtney and Khloe Take Miami, leaving many fans to wonder about Scott having an anger problem.

Oh, and let's not forget the countless times he cheated on Kourtney, the mother of his 3 children.

Not only is it totally gross that a then-thirty-three-year-old man would date a teenager (she was nineteen at the time), but Scott also thought it would be a good idea to fly Bella Thorne to France for the sole purpose of getting wasted.

And remember that time he invited a random woman on the family vacation?

The Kardashians invited Scott on their family vacation even though he and Kourtney had broken up in order to make him feel included. But he invited a mysterious woman named "Chelsea" to come without consulting anyone else.

Then he also forgot his daughter's birthday...

Okay, this one is just plain sad. In July of 2016, Scott's adorable daughter Penelope turned 4 years old. She celebrated in typical 4-year-old fashion, with a giant party in the Bahamas. But there was one important person missing from the festivities – Scott Disick,  who also failed to post anything on social media about the day.

He hasn't had a good relationship with Instagram, either.

A few months ago the social media star was called out for posting what was described to be a "racist" post but after that died down, he's been pretty quiet.

But last week, matters seemed to have reached new heights for the star...

Because it has been revealed that he has checked himself into rehab.

The star has yet again been battling with ongoing substance abuse issues...

And now he appears to be seeking help for his struggles.

According to E!, the star entered a treatment facility in Edwards, Colorado last week.

"It's true. Scott checked in last week," a source revealed.

Scott's previous struggles with substance abuse have been no secret over the years...

And he had been sober for the past few years since he last sought treatment in 2017 - and it is truly disheartening to see him plunge back into this downward spiral.

But, reportedly, his substance abuse had gotten worse over the last couple of weeks.

And Kourtney was forced to step in.

The source revealed that Scott had a "lot of guidance" from Kourtney...

And that she "demanded that he get help."

In fact, according to the source, Kourtney won't allow him around the kids until he gets treatment.

"Things have been bad the last couple of weeks and Kourtney won't allow him around the kids unless he gets treatment."

But things are just too difficult for Scott.

It has emerged that Scott has already checked out of rehab after a member of staff leaked a picture of him online... which left the reality star utterly furious.

It is believed that he is back in L.A. quarantining by himself...

But this means that he isn't getting the help that he so desperately needs.

Kourtney is yet to break her silence on Scott's situation...

But eagle-eyed fans took her recent Instagram story as a cry for help after she wrote, "Kinda tired of being OK with things I'm not okay with."

Fans were quick to send well wishes to Kourtney...

With one user writing, "This is so obviously about Scott. I really hope he's okay, and that you are both still on good terms."

This will have put a strain on the whole family...

"Poor Kourtney. It can't be easy to have an addict as the father of your children. I hope he gets the help and healing he needs one day before it's too late," another fan wrote.

We hope that both Scott and Kourtney are doing okay.