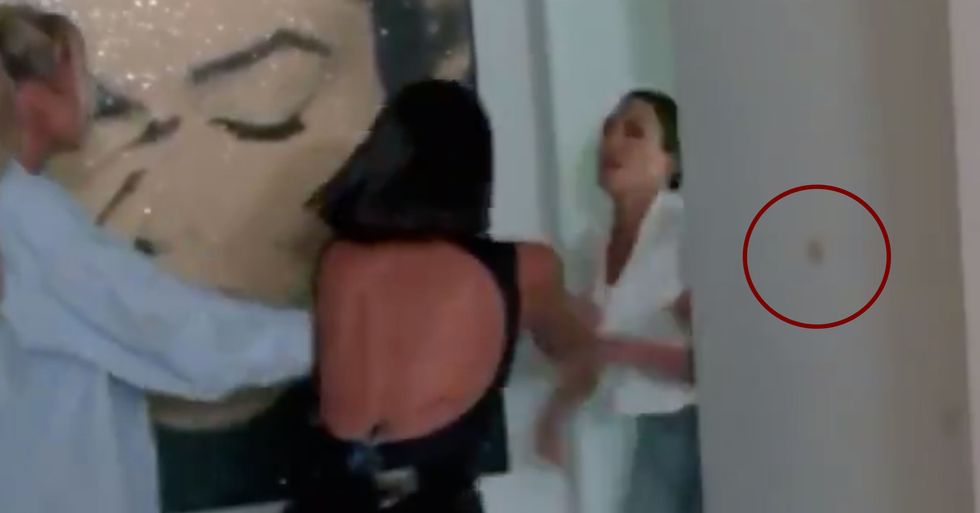 It's no secret that the Kardashian/Jenner sisters have had their fair share of squabbles over the years, but we hadn't seen anything like when Kim hit Kourtney in the face on an episode of their show.

Both Kim and Kourtney have now addressed the situation. But, after watching the footage, some eagle-eyed fans have now noticed something even more shocking about the clip.

Keep scrolling to watch the chaotic clip and to see how both sisters have responded...

Kourtney broke her silence on the brawl between her and Kim after fans went online calling it "cringeworthy." Keep scrolling to watch the clip.

And earlier this week, Kim finally spoke out about her and Kourtney's on-screen bust-up.

But, after watching the clip...

Some eagle-eyed fans have noticed something even more shocking about the fight.

At one point in their brawl...

Kourtney slaps Kim, who proceeds to crash into a wall.

But it seems Kourtney hit Kim so hard...

That Kim left a makeup smudge on the wall.

And fans have been finding the whole thing pretty hilarious.

"Kourt slapped the LITERAL S**T out of Kim. So hard, her makeup smeared on Khloe’s white walls lol," wrote one user.

Brutal... For more on the Kardashian-Jenners, keep scrolling to find out why Twitter is calling out Kylie Jenner…