Kranch Is Here, and It's a Delicious Combo of Ketchup and Ranch | 22 Words 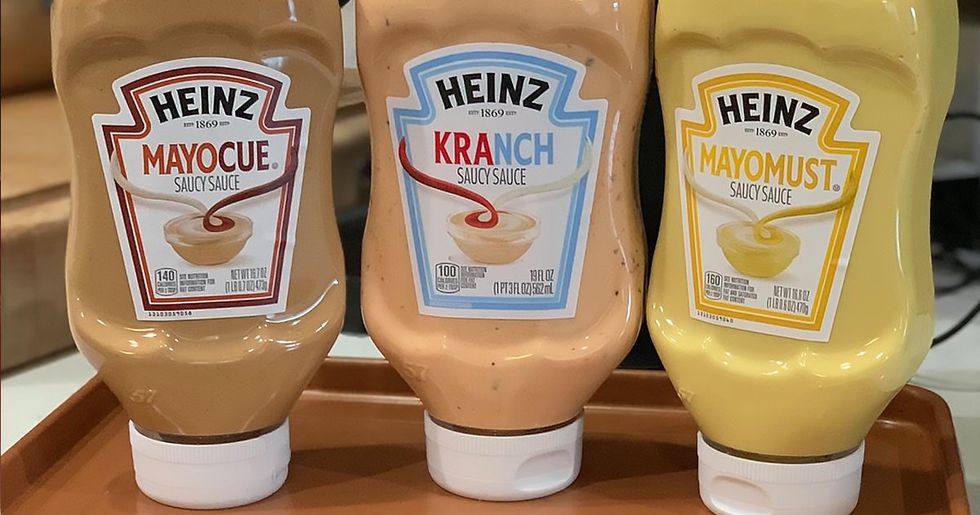 Kranch Is Here, and It's a Delicious Combo of Ketchup and Ranch

Are you a sauce-aholic? You always drown everything on your plate in an awesome array of sauces and one packet of Ketchup seems like a sad cry for help for those who have no creative taste buds?

You're a flavor fanatic, and you have no shame about your sauce indulgence. For those of us who can't live without all the sauces, you know how exciting it is to try a new one or even create a new combination of flavors. Well, in the world of sauces, we've got some amazing news. Heinz has announced a new sauce and it's the best of both worlds but not for the faint of heart.

Get ready to dive into Kranch, the ketchup and ranch infused sauce that is going to change your life. We all already mix those two sauces in a messy and beautiful way so it's about damn time we got a bottle that does the job for us. Kranch has some strange siblings too; Heinz is just getting started with their combination sauces so read on because it only gets weirder and more amazing.

You're a sauce connoisseur.

Some people have a very strong love for sauces. It's not a habit, it's a lifestyle choice and it truly enhances every meal.

You can never have just one.

There always needs to be an array of sauces, and if there's not, the meal is just not the same.

It's easy to judge others who choose just ketchup or just mustard. They are basically saying they live a boring life.

You can mix it up, no judgment.

So you mix your mayo with barbeque sauce; basically, you're a genius!

Live life on the wild side.

Mixing sauces is a sign of adventure and bravery, so stay close to those friends that don't hold back at the sauce bar.

But it gets kind of tiring.

Constantly seeking new sauces and having to mix your own combinations is getting tiring. Why can't someone support your sauce addiction and just make it easier for you?

Get ready to fall in love with a hybrid.

Heinz is listening and they know just what we need. Get your fries ready because they are about to be in sauce heaven.

Kranch sauce is here! Reply with #KlaimMyKranch and #Sweeps and we might just give you one of the first 100 bottles… https://t.co/BwWFuDnQFA
— Heinz Ketchup (@Heinz Ketchup)1554292887.0

It's the mash-up we needed.

Say it a few times. Kranch. It just makes sense. We've been waiting for this our whole lives.

It's a lot to take in at once.

I know you're excited, possibly overwhelmed. Kranch is the heavenly condiment we have been waiting on for so long. And this isn't the first time Heinz has made a beautiful mashup. Keep reading and you'll see more crazy sauce hybrids.

The internet is very pleased.

It's about the greatest news we've heard all year.

The name may take some getting used to.

All great things started with a little opposition. The name may take a few tries to feel normal but I think the flavor will make up for the awkward brand.

Some people have already ruined it for us.

I'll probably never get this image out of my head. I will try my best to disassociate this image from the holy and heavenly Kranch.

He's got a point.

@KrangTNelson It is, to be fair, marginally better than its competitor product, Retchup.
— Darth Vadose (@Darth Vadose)1554390888.0

Even if you don't like the name Kranch, you've got to admit, it's much better than Retchup.

Don't knock it before you try it.

Before you know it, your pantry is going to be full of Kranch and every meal will have Kranch on the side.

It's going to save us a lot of time.

No more cramps in your hands from mixing your favorite sauces or squeezing multiple condiment bottles on your plate.

It's coming to a store near you.

The new hybrid is set to hit shelves sometime in April 2019. Some stores already have them stocked, so keep an eye out.

Some people already have their hands on it.

Mostly out of curiosity, some people can't help but take a bite of the forbidden fruit.

But don't get crazy.

You don't have to eat spoonfuls of it like this guy. Just take it however you like it.

Kranch has some hybrid cousins.

This isn't Heinz's first rodeo when it comes to mixing condiments and selling them on your shelves.

.@HeinzKetchup_US dropping #Kranch on the world today, a mixture of Ketchup + Ranch. Question: you can only choose… https://t.co/tndV3ovfmb
— Cass Anderson (@Cass Anderson)1554295690.0

Meet Mayocue and Mayomust, the other members of the hybrid family.

Mayocue, the combination of mayonnaise and barbeque sauce, was quite interesting for some people. Mayocue and Mayomust are available on the shelves of most grocery stores now, so you'll definitely have to try this one for yourself.

There's always going to be haters.

There was some backlash online and a few people were grossed out by the idea of these sauces mixed together in bottles.

Mayonnaise and ketchup, another crazy but well-loved combination. To each their own!

It was one of the original mashups.

Maybe it wasn't the most loved condiment, but not every idea is going to be perfect.

But Americans had to fight for this sauce.

Apparently, it was initially only sold in the Middle East until Americans did the American thing and voted on it.

Heinz liked to tease their fans.

Thanks to the fans of Mayochup, our saucy family is growing! Which flavor mashup are you most excited to dip into?
— Heinz Ketchup (@Heinz Ketchup)1551820634.0

Before the official announcement, fans got the chance to guess the next flavor mashup.

They had a great time messing with everyone.

I think we can all agree we're happy this is not where they were going with their ideas.

Thank heavens it wasn't this either.

What an absolute nightmare this would be.

If you're genuinely grossed out by "mayocue" and "mayomust," you should probably know practically every burger join… https://t.co/qKgO5lEjxx
— Iron Spike (@Iron Spike)1551973893.0

Don't get your sauces in a twist. All these mixes are for our benefit. It doesn't mean you have to buy it, but you most likely already have these combinations on your plate.

Go get your sauce on.

Share the saucy news with your friends who thoroughly enjoy seeping all their food in sauces.