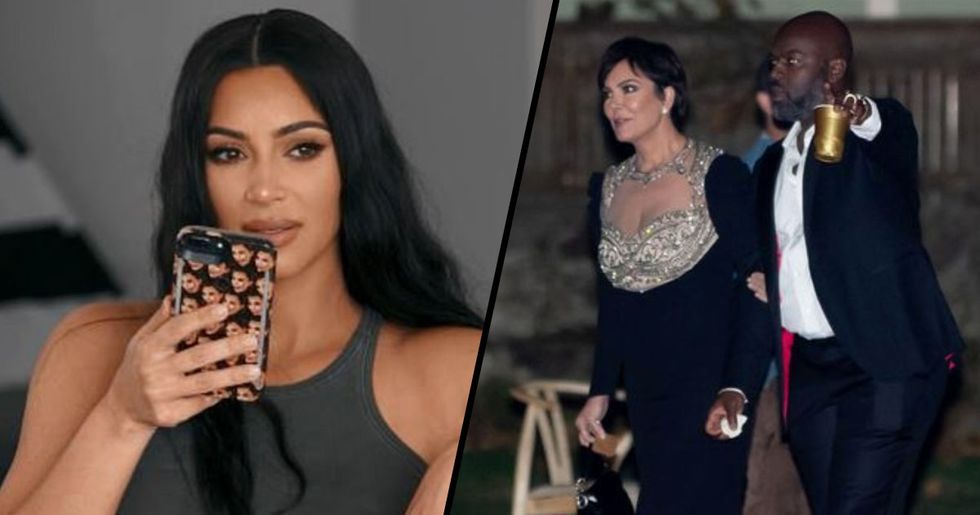 There were two big events in Kris Jenner's social calendar last weekend. One being the twenty-ninth birthday of her beloved daughter, Kim, the second being the wedding of Jennifer Lawrence.

For some reason, Kris Jenner is a favored guest for many young celebrity weddings. It was only a few weeks ago when Kris was celebrating the nuptials of Hailey Baldwin and Justin Bieber.  The difference with that wedding though, was that most of the Kardashian klan were invited. Kris, along with her partner, Corey Gamble, were the only ones to receive one of Jennifer Lawrence's wedding invites.

So how come J-Law is more interested in momager, Kris, than, say, Kendall or Kylie, or, heck, even Kim? Well, Jennifer Lawrence has always struck me as someone with an eclectic mix of friends...

The guests at her wedding proved just how eclectic that mix is.

Continue scrolling to read all about it.

Congrats to the happy couple.

Lawrence's wedding party was an anyone who's anyone affair.

Holding the ceremony in a haunted mansion in Rhode Island, it really was a wedding not to be missed.

I guess Kris is just the kind of person that people want at their wedding...

A lot of people were jealous not to make J-Law's guest list.

We can only imagine that the Kardashian/Jenner brood were jealous that their mom was invited over them.

Kris and Corey know how to wedding.

The pair certainly look very smart when they get suited and booted... and I bet they fork out for a decent wedding gift.

I mean, sure, there's no way that Jennifer Lawrence won't have hired a professional photographer, but there's a certain skill that only Kris Jenner possesses. Who do you think the Kardashian and Jenners learned all their candid glamor from? The internet? No, Kris!

Kris knows how to throw a party.

In fact, this is something that Jennifer Lawrence already knew about. As it turns out, J-Law and Kris have been friends since she asked the momager to help to plan her twenty-fifth birthday bash. So there you go!

Well, that's the music boxed off.

ADELE WILL BE PERFORMING HER NEW SINGLE FOR THE FIRST TIME AT JENNIFER LAWRENCE’S WEDDING TONIGHT 😭
— alex (@alex)1571524650.0

Imagine having Adele perform at your wedding. How amazing would it be to watch the wedding videos back years later when you're divorced? I mean, think about it, you're laying on the couch, eating a tub of ice cream, watching, and rewinding, and watching again your first dance... muttering to yourself, "Adele predicted it all along."

"I've heard that you've settled down..."

*Jennifer Lawrence and Cooke Maroney step out into the low-lit dancefloor* Adele continues: "That you found a girl and you're married now. I heard that your dreams came true. Guess she gave you things, I didn't give to you." *Everyone cries*

Adele and J-Law go way back.

The pair are actually really good friends. Adele posted a pic of them together at the Women's March earlier this year and wrote: "I am obsessed with all the women in my life. I adore them." Notice the other lady in Adele's post? That's Cameron Diaz! - Who was also in attendance at Jennifer Lawrence's wedding.

Amy Schumer was present at the ceremony.

Schumer and J-Law are tight and it's no surprise that she was one of the 150 guests to attend Jennifer Lawrence's wedding.

Lawrence explained how the pair became friends to Vanity Fair, saying: "She texted me that she got my number from Woody, I replied, 'F*ck off!' And we've been really good friends ever since." Fair enough, eh?

Talking to Vanity Fair about their relationship, J-Law stated: "Woody Harrelson is one of my closest friends in the entire world." This was seconded by Harrelson who said, "She’s one of my favorite people on the planet, and I can’t imagine my life without her. . ." Sweet, huh?

Woody wasn't the only Hunger Games cast member at the wedding...

Word on the street is that Josh Hutcherson and Liam Hemsworth were also invited.

I mean, is anyone surprised?

That trio sure went through a lot during the making of the Hunger Games franchise... you could even say that they grew up together. And everyone invites old school friends to their wedding, right?

Bradley Cooper got an invite.

Jennifer Lawrence and Bradley Cooper became close whilst filming the exceptional Silver Linings Playbook (2012). Since then, the duo has gone on to make three more movies together: American Hustle, Joy, and Serena. Their on-screen chemistry is undeniable. That being said, the pair have always quashed rumors of an off-screen romance. Cooper slammed suggestions of anything more in 2005, telling US Magazine: "I could be her father."

J-Law already has one of those...

If we assume that Jennifer Lawrence stuck with tradition, it certainly would have been her actual father, Gary, who would have given her away. Gary seems to share his daughter's cheeky humor, as seen above, flipping off paparazzi.

Security was paramount on the day of the wedding.

Very few photos have surfaced from the day. That being said, with the wonder of social media, one picture will always fall through the cracks... and doesn't she look absolutely beautiful? Apparently, her dress was by Dior.

Despite the fact that it was Kim's twenty-ninth birthday on the same day, Kris Jenner decided that J-Law's wedding was the hotter ticket.

Not that Kim seemed to mind.

Kim Kardashian is a grown woman and didn't need her mom there on her birthday. In fact, Kim didn't have a big party or anything anyway. She decided on a small affair, arranging only an intimate family meal. So don't worry, Kris, doesn't seem like you missed anything special...

It's a good job it wasn't Khloe's birthday...

I feel as though Khloe would have taken it much more personally if Kris had decided to go to, say, Jennifer Lawrence's wedding, over her birthday meal.

Not that Kris wasn't thinking about Kim...

Over the weekend, Kris posted a soppy tweet about Kim's upon-upon-a-time engagement to Kanye; she called it "the most amazing memory." More amazing than when Adele sang her new unreleased single as Jennifer Lawrence and Cooke Maroney took their first dance? (I don't think so...)

It turns out that it isn't surprising at all that Jennifer Lawrence invited Kris to her wedding.

According to Kris, they're BFFs.

My BFF #Jenniferlawrence asked me what i wanted for Christmas and of course I said a Porsche, DUH. My girl didn’t d… https://t.co/BWgBvuppu1
— Kris Jenner (@Kris Jenner)1514059107.0

I mean, J-Law did get Kris Jenner a Porsche for Christmas... sort of.

Kris and Jen go way back.

Apparently, the pair have been friends for a while. Jennifer Lawrence was reportedly obsessed with the Kardashian's reality show and happened to cross paths with momager, Kris, striking up an instant friendship. So there we have it. I wonder what Kris and Corey got the newlyweds... Continue scrolling to read about the woman whose maid of honor managed to wangle her a life-time's supply of chicken nuggets for the ultimate wedding present.