Johnathan instantly turned the car around to rush home... | 22 Words 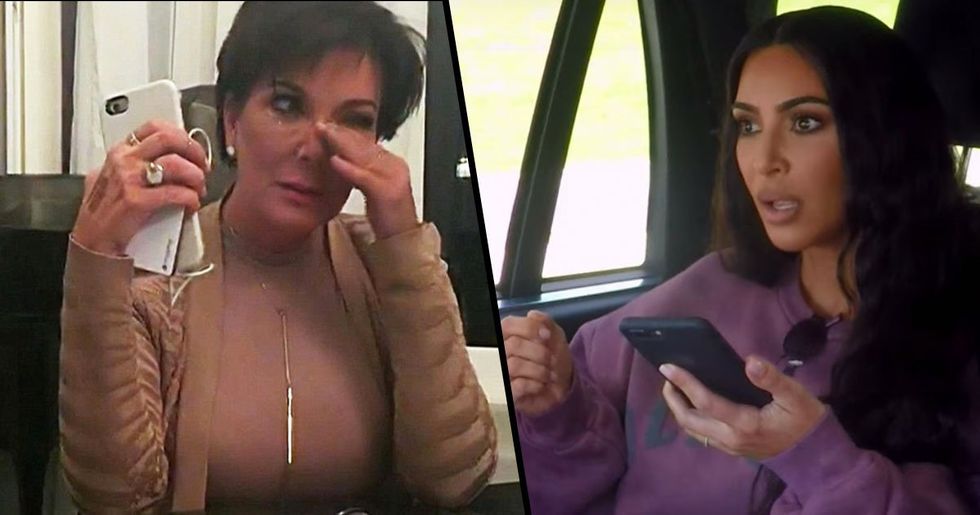 The Kardashian/Jenner family are never far away from drama.

Whether that involves cheating boyfriends, gender reassignments, Jordyn Woods, or even just petty arguments live on television - if there's a Kardashian around, there's going to be some form of drama.

It's no secret that we absolutely live for this drama, and you will all be pleased to know that there's now even more.

A scene from the most recent season of Keeping Up With The Kardashians has been teased online and it shows the aftermath of Kris being tackled by members of Kim's security team.

The Kardashians are one of the most famous families in the world.

And when it comes to dealing with the world's constant attention, security is needed at all times.

The security for the Kardashian and Jenner clan, in particular, Kim, is tighter than ever before.

Kim's hotel room was broken into during Paris Fashion Week...

She was robbed at gunpoint and was gagged and blindfolded by the masked intruders.

After they had raided the room, they tied Kim up and left her locked in the bathroom fearing for her life.

$10 million worth of jewels were stolen...

The following year, Kim made an appearance on The Ellen show and spoke of the incident. "But you know, it does happen really fast, it was a good seven or eight minutes of torture but when I look back and I analyze it, it could have been way worse," she said tearfully. "So I don't want to sound like I'm not grateful. I'm out, I'm home, I'm safe, I'm such a better person. I'm... it's OK, let's move on."

Kim ended up suing her former bodyguard for $6.1 million...

Protect Security didn't do their job.

According to TMZ, the suit also alleges there were numerous security breaches - including a missing or broken lock and a broken intercom system - which they think should also have been addressed.

As you can imagine, the Kardashians sought out a better security company.

Kim's security are on hand at all times, including whenever she is out and about and even patrolling her and Kanye's $20 million home in California.

Season seventeen is currently being released on E!

With only one episode being released per week, E! have been teasing us online with little snippets from the show.

The most recent tease was an epic one...

The tense scene shows Kim traveling in her car with her best friend, Johnathan Cheban.

She receives a frantic phone call from sister, Khloe...

Khloe can be heard down the line saying: "Kim, you need to come home right now. Your f****** security just tackled mom."

Kim is clearly very distressed by this information.

Khloe explains on the phone that she had called 911 as sixty-three-year-old Kris can be clearly heard crying and moaning in pain in the background.

"This is so crazy. … The ambulance is on their way here now," Khloe can be heard saying.

"We were in the backyard, and mom came down when she shouldn’t have. I told her to go around, and they just tackled her," she said.

Johnathan instantly turned the car around to rush home...

Looking at her phone, she was seemingly able to dial into the surveillance system of her home and she gasped when opening it up.

The details of the incident are still unknown...

Kris is seemingly back in good health as she has done a ton of promo work and has been out and about since the season was filmed a few months ago.

Season seventeen seems to be packed full of drama...

It has featured Kim receiving the news that she tested positive for lupus antibodies - an autoimmune disease that attacks the body's organs and tissue.

Her joints have already been affected...

They have become swollen, stiff, and painful, which is a common side effect of the disease.

Never a dull moment in the life of a Kardashian! Keep scrolling to learn about Kim's very own beauty line and why it has received so much criticism...