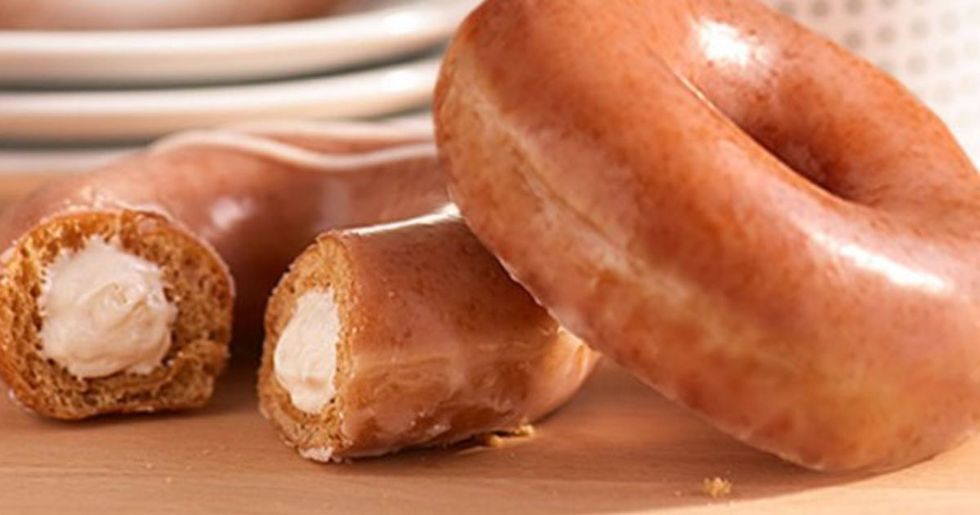 Krispy Kreme Doughnuts. Even just seeing those three words is enough to make your mouth water. Whether it's freshly made, straight off the conveyor belt, or boxed up in a stealthy twelve-pack, you can't deny the satisfaction of biting into a glazed ring sent directly from heaven.

It might be the way that the glaze melts as the warmth of your fingers kisses the surface, or maybe it's the way that they softly break away as your teeth tear away the first bite. Whatever it is, a Krispy Kreme doughnut makes for the perfect treat. Stick with us for a sneak-peak of the brand's latest fall-related twist on the original recipe, as well as a countdown of our top 10 picks of the best Krispy Kreme doughnuts ever.

Warning: it may be difficult to refrain from licking your screen, but we'd advise against doing so.

At number 10, we have what many would consider to be a classic. A rich layer of caramel on an Original Glazed Doughnut. I dare you to name something better. Oh, wait, number 9 might just do it...

There are two things that I truly appreciate in this world: caramel and cheesecake. And Krispy Kreme knows what's up with the invention of this one.

At number 8, we have another classic. You can't go wrong with a raspberry filled doughnut, can you?

This one is filled with cake batter Kreme, topped with yellow icing and bright confetti sprinkle to give it that party look. Quick sidenote: the flavoring is artificial... so no need to worry about getting a tummy ache from an uncooked egg!

Another classic! This one tastes good no matter the occasion.

I ask you again, is there anything better than cheesecake in doughnut form? This one is filled with rich, creamy cheesecake filling, topped with cream cheese icing and sprinkled with crunchy graham.

Labeled perfectly, this delicious treat is brimming with chocolatey goodness - a perfect bite for those with an exceptionally sweet tooth.

A doughnut-y twist on a classic dessert. The Apple-Pie doughnut contains a cozy mix of cinnamon and apple.

Another pie doughnut. Krispy Kreme really seems to like pies, and so do I! So just missing out on the top spot is the Cherry Pie doughnut, oozing with a rich cherry filling.

The winning doughnut has to go to the Lotus doughnut. It's filled with a delicious mix of Lotus caramelized biscuit spread and Kreme. The combination of biscuit crumb and white chocolate shavings for the topping makes this the perfect Krispy Kreme doughnut.

Krispy Kreme is now selling the Original Glazed Doughnut with a special addition just in time for fall.

Krispy Kreme has been blessing our tastebuds with its Original Glazed Doughnut since 1937, and, just as we hit fall, they're releasing a brand new filling, and, with the likes of Starbucks releasing its pumpkin spice latte, the popular donut chain appears to be next to jump on the trend.

Krispy Creme is releasing another pumpkin spice version of the doughnut.

Though you may be expecting some fancy pumpkin spice product, the beloved chain is keeping it simple with its new creation... the Pumpkin Spice Original Filled Doughnut.

It's essentially the chain's Pumpkin Spice Original Glazed Doughnut but with a tasty twist.

The new doughnuts are filled with cheesecake kreme. Our mouths are watering just thinking about eating one.

When will they be available to buy?

We can't get enough of all this fall goodness. If all the pumpkin-spice talk is tantalizing your tastebuds, keep scrolling to see Starbucks' brand new edition to its famed pumkin-flavored line. Spoiler alert: it looks amazing.