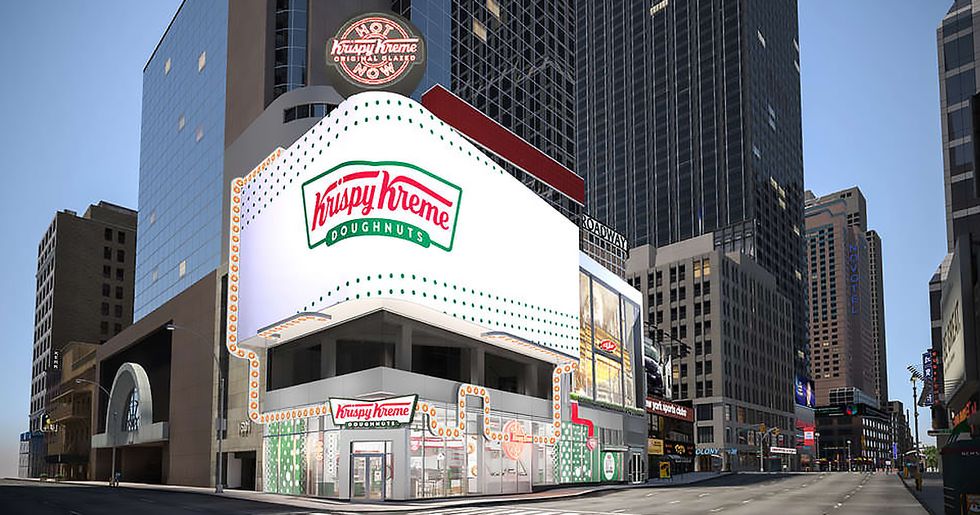 Let me tell you a story about the worst day of my life. I was in high school, I piled into a car with my best friends, and we drove down to the newly-opened Krispy Kreme in Maple Grove, Minnesota. When we got there... the "Hot Doughnuts Now" sign was off.

Of course, we were all devastated. We turned back around, not willing to settle for anything less than the sweetest, freshest, melt-in-your-mouth glazed doughnut that we could buy. My friends and I were never as close again after that traumatic day. The hurt was too deep.

Soon, New Yorkers will never again have to risk their friendships. A 24-hour Krispy Kreme doughnut shop is opening in Times Square, and it won't just be your average doughnut shop. In fact, when you find out what Krispy Kreme has planned for the spot, you might want to pile into a car to take a trip yourself.

Krispy Kreme makes, quite possibly, the best doughnuts in the world.

Without a doubt, there is something magical about Krispy Kreme. They're the only doughnuts that you can eat a dozen of by yourself, go into work and tell your coworkers what you did and hear back, "oh yeah, I get that," instead of, "that's disgusting, you're fired."

There are some incredible creme-filled doughnuts.

Can we talk about how Krispy Kreme is the only place that I can reliably get a whipped cream-filled doughnut? Every other doughnut place's filled doughnuts are a crapshoot between whipped cream and custard. And I think we can all agree, custard can go to hell.

They have interesting specialty doughnut.

Beyond the standard chocolate, ice-glazed and strawberry-frosted-with-sprinkles doughnuts, Krispy Kreme offers some fairly bonkers options, including the key-lime doughnut and the Oreo Cookies and Kreme doughnut.

And there are even some mad scientist-level concoctions.

Whether or not it was officially ordained by Krispy Kreme, a few years back, the San Diego County Fair offered the Krispy Kreme Sloppy Joe, which was your standard meat and cheese joe in between a halved glazed doughnut. The Krispy Kreme possibilities are endless...

But there's something special about Krispy Kreme's glazed doughnut.

Yes, it's about getting them hot and fresh.

Krispy Kremes that are fresh out of the oven (frying oil?) are worth dying for, and the good folks at Krispy Kreme do their customers a solid by turning on the "Hot Doughnuts Now" sign. If you see that thing turned on, ooh baby, your night just got spicy!

But another part of that specialness is their scarcity.

There aren't a ton of Krispy Kremes stores around just yet. The chain has a mere 316 stores open in the United States in 2017, while rival doughnut-makers, Dunkin, has 624 stores in New York alone.

That means that Krispy Kreme doughnuts are a rare treat.

You always have to drive way out of the way to get Krispy Kreme, and that's the only reason that we're not eating them constantly. People desperately want more Krispy Kremes, as evidenced by how fast they go when you bring them into work.

But the Krispy Kreme corporate overlords have bigger plans than being a "rare treat"...

Look at all the graphs behind these guys. As any good group of CEO-type would know, they know that the supply-and-demand of Krispy Kreme is all out of whack — we want more doughnuts than they're able to give us.

But that's about to change.

Michael Tattersfield, CEO and President of Krispy Kreme Doughnut Corporation, put out a statement (which comes to us via TimeOut) suggesting that Krispy Kreme has big dreams for its future, saying “our direction is to be the most loved sweet treat brand in the world."

Part one of that plan involves opening a Krispy Kreme in Times Square.

Krispy Kreme Will Open A Massive Store In Times Square Next Year - Krispy Kreme When is the best time to eat a do… https://t.co/YPGXv241jb
— elementarty (@elementarty)1560260729.0

What better way to make a splash than by getting in front of the eyes of basically every tourist in the world? “In the most iconic city in the world," Tattersfield said, "the Krispy Kreme Times Square Flagship will showcase our brand on the global stage and inspire customer wonder. We love making awesome doughnuts—and New Yorkers deserve hot and fresh doughnuts!"

So if you happen to be in New York and have a really, truly, deeply unhealthy obsession with doughnuts, you don't have to wait that much longer to wait!

The store will be at 1601 Broadway, on the corner of 48th Street and Broadway.

A quick Google Maps search suggests that the Krispy Kreme will be right next to Alpha Capital Ventures and just across the street from Fossil! You have to think, there are at least a couple of folks working at those two spots who'd love a doughnut. Krispy Kreme Times Square is already off to a great start!

Hopefully, it won't have the same consequences as the Times Square Chipotle...

Got Chipotle today near Times Square behind a lady who legitimately had never had Chipotle before. She looked at… https://t.co/RCP2D8i5J0
— Luke Null (@Luke Null)1536702157.0

The Times Square Chipotle is no different to any other Chipotle in the world, except that everyone who eats there is a parent wearing a fanny pack and is accompanied by their disappointed child who can't believe that their parents flew all the way to New York to eat the same thing that they do at home.

They should deffo aim for the effect of the Times Square M&Ms store.

The M&Ms store is a multi-colored wonderland of candy-coated chocolate with all the toys, t-shirts, and novelty sunglasses featuring anthropomorphized versions of said candy-coated chocolate you could ever want. From what Krispy Kreme's said so far about its Time Square store, it will be closer to the M&Ms store, in that it won't be a traditional retail store and will, instead, be a celebration of Krispy Kreme.

Visitors can go inside and see how the doughnuts are made.

And, no, that doesn't mean that you can see Krispy Kreme board members make shifty corporate power moves. I mean the other kind of seeing how the doughnuts get made.

You can literally see how the doughnuts are made.

The Krispy Kreme Times Square store will have its entire factory visible to the public. Hopefully, they'll also offer headphones so that visitors can walk around listening to Raymond Scott's "Powerhouse," the song that plays at all times in all factories.

At the Times Square Krispy Kreme, you'll see the mixing of the dough...

The mashing together of raw ingredients is the genesis of a doughnut, and, soon, New Yorkers will be able to witness this vital first step in the Times Square Krispy Kreme.

Now, these are the steps that make the doughnuts so special. Cakes, brownies, and cookies? You can bake those at home in your oven. But you need a giant vat of oil to make doughnuts. Soon, New Yorkers can take a look at the home-doughnut gatekeeper in action.

And the wall of glaze.

Now we're talking — the wall of glaze is what makes Krispy Kremes Krispy Kremes. Although I do always get stressed out because it looks like they're wasting a lot of glaze...

It's almost enough to plan a whole New York vacation around.

I mean, obviously, don't just go to New York for the Krispy Kreme doughnuts. You'll at least want to try and snag tickets to Les Mis, too. The current cast is very good.

And you have to imagine this is just the beginning of Krispy Kreme's expansion plan.

And I'm not talking about the kind of expansion plan that I had when I had to put on a bunch of weight for wrestling in high school (that plan also involved doughnuts).

Soon, we'll see Krispy Kreme stores in all of the major tourist spots in the world, including the Eiffel Tower...

Taking a vacation to France means taking in some of the finer things like art, wine, and fine cheeses. But, hopefully, soon, we can add a hot and fresh doughnuts to that list.

It's actually crazy to me that the Holy Capital of the world doesn't have a Krispy Kreme yet. The only thing that I ever looked forward to about going to mass was the doughnuts and juice at the end.

Stonehenge is one of mankind's greatest mysteries. I'm not talking about who built Stonehenge itself, or why, but why don't they have a Krispy Kreme yet?

But will Krispy Kreme doughnuts still be good if they're everywhere?

Here's my worry: say Krispy Kreme is successful, and they become the new Starbucks, rolling out to every corner in America. What then?

What if their doughnuts are no longer scarce?

Part of the fun of Krispy Kreme is tracking them down; you know, going on what almost amounts to a treasure hunt to find a store. Officially, I'd be afraid to lose that feeling.

What if we get used to Krispy Kreme?

I suppose that's how you become "the most loved sweet treat brand in the world."

To reach worldwide saturation, to get to the point at which literally everyone loves your doughnuts, you can't be concerned with the soft sciences of scarcity and making the people want more. You gotta just make 100 billion of them and feed them to the world.

I just hope that, once they get there, Krispy Kreme is still special.