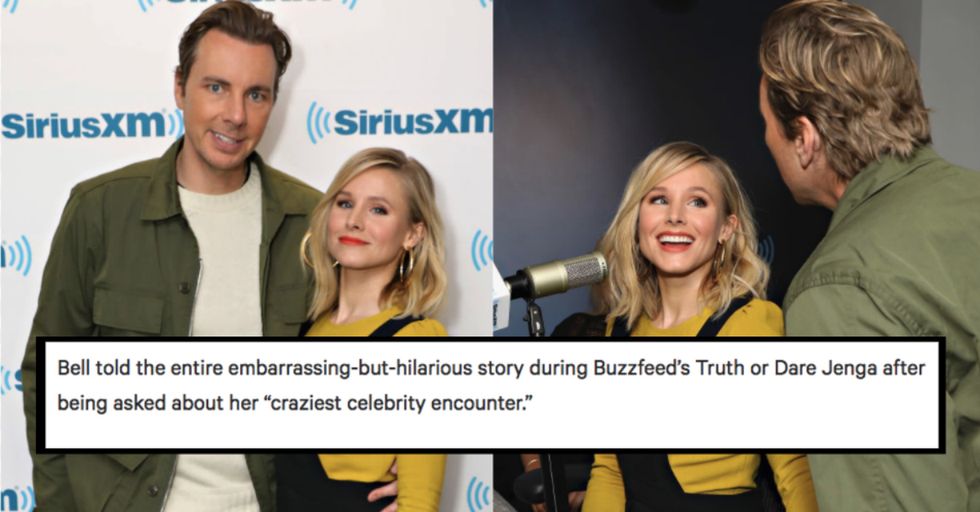 Everyone has said something embarrassing in a social situation. You're nervous, you're meeting someone new, you try to make a good first impression, and ... bam. Word vomit.

While it can be mortifying for you, it's highly entertaining for the people around you.

Luckily, we've got a story for you that'll make you feel a WHOLE lot better about your own faux pas.

He's a British Pakistani actor who's been taking Hollywood by storm since his breakout role as Jake Gyllenhaal's doomed sidekick in Nightcrawler. Since then, he's starred in HBO's hit miniseries The Night Of, and appeared as Bodhi Rook in the first Star Wars Anthology film, Rogue One.

He also happens to be an accomplished rapper and activist.

Known as Riz MC, Ahmed is a member of the Swet Shop Boys and has released critically acclaimed albums both solo (Microscope) and with the group (Cashmere). His song "Immigrants (We Get The Job Done)" was featured in the chart-topping Hamilton Mixtape and won him an MTV Video Music Award. Most of Ahmed's music is political in nature, and he's been working to raise money and awareness for Syrian and Rohingya refugee children. His activism earned him a spot on the cover of Time's 100 Most Influential People 2017.

Oh, and did we mention he's a dreamboat?

We know this may be a pretty bold statement to make, but come ON. Look at him! He looks like a Disney prince!

And it turns out we're not the only ones who feel this way.

Take our girl Kristen Bell, for example. The actress has got it bad for Ahmed, and her husband was quick to let him know during her first encounter with the studly star. Bell told the entire embarrassing-but-hilarious story during Buzzfeed's Truth or Dare Jenga after being asked about her "craziest celebrity encounter."

"I have a real big crush on Riz Ahmed, and my husband knows him—he's like my wingman," she said.

The painfully awkward exchange between Ahmed and Bell's husband Dax Shepard starts innocently enough. "He goes 'Riz, I just want you to meet my wife. Riz, this is Kristen.'" Meeting someone you've got a secret crush on is always uncomfortable, right? Just wait. It gets SO much worse...

Shepard went on to add one very awkward detail to Ahmed's first introduction to Bell.

"She finds you very attractive," he continued. Apparently, Ahmed was left speechless at Shepard's comment. "And then it was like, crickets," said Bell of the exchange.

Ahmed seemed not to know what to make of the comment, and of course, Bell feared the worst.

"You could tell by the look on his face that he was like, 'Is this a trap? Are they inviting me into some type of weird situation after the Globes?'" she said. The amount of secondhand embarrassment we're feeling right now is all too real.

"I could tell how uncomfortable we made him," Bell continued.

"... and then I just kind of walked away." We're not sure if just walking away was the best option or if it just made things worse, but we'd probably do the same in that situation.

We're guessing Shepard loved every minute of the encounter since he seems to enjoy poking fun at his wife.

Case in point, this photo from their wedding. As Bell breaks down in tears, Shepard openly laughs in her face. So romantic.

"On a daily basis he just makes me laugh all the time," she said.

"He's obsessed with attention, so he's constantly making jokes to try to get me to give him more attention or to get me to giggle. And you know, he was a stand-up comedian, so I'm living with a comedian."

Here's hoping that Ahmed was able to laugh about the exchange later.