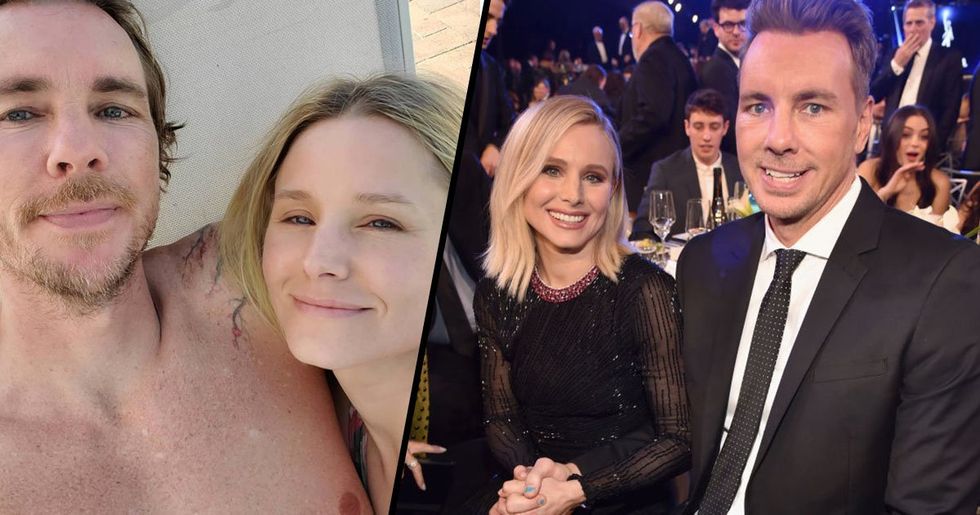 Kristen Bell And Dax Shepard Both Forgot Their Wedding Anniversary

Kristen Bell is a busy lady.

Dax Shepard is a busy man.

As a couple, it's amazing that Kristen and Dax find any time for each other.

But you don't become "couple goals" for nothing, and it's this dedication the pair put into their relationship that has made them the envy of Tinseltown.

Sadly despite being a seemingly perfect couple, neither of them remembered their wedding anniversary.

Talk about a faux pas! Here's what happened...

Dax Shepard and Kristen Bell sure are a good looking couple.

The world has taken notice.

When Kristen Bell and Dax Shepard do game nights everyone is like “awww couple goals” but if i suggested a game nig… https://t.co/n2sCg4hRXo
— Sophia Benoit (@Sophia Benoit)1516833318.0

Kristen and Dax are so cute and do loads of cute couple things together that everyone can't help to wish they had a relationship like these.

Kristen and Dax famously declined all the Golden Globe after-parties to instead play settlers of Catan.

When out of town, at home, at the golden globes... these two always find time for a board game.

They met through friends.

At the house party of a mutual friend, the pair got talking. The spark was instant, both Dax and Kristen knew that it was something special.

Dax always said he was against marriage...

But that all changed when he met his soul mate, Kristen. He proposed and Kristen said she yes.

They decided to postpone their wedding.

Bell and Shepard decided to abstain from getting married until the gay marriage bill was passed through congress and everyone could get married.

In true modern fashion, Kristen eventually asked Dax to marry her over Twitter. The bill for gay marriage had been passed and Bell was ready.

So he had Kristen's last name tattooed to his wedding finger. It's a good job her name wasn't something like Kristen Dickinson...

These two keep each other looking their best.

Which you know, is nice and everything for a regular couple, but actually quite important for actors in the public eye.

Being successful actors means that they all always have to look their best.

Couple goals is certainly has something to do with having matching outfits, right?

Dax and Kristen are cool parents.

This duo love being parents to their two children and they are constantly going on family adventures.

Bell and Shepard are both sober.

Dax Shepard has a dark past with alcohol and drug abuse. He has been sober since 2004. Speaking to People, Bell said: "I know how much effort has to be put into staying sober. There are different elements you have to deal with when you're staying sober. It's a ton of mental control and evolution." Bell considers it is Dax's sobriety that has kept their marriage together.

Thanking his wife for everything that she does, Dax made it clear just how much Bell means to him and their young family. He said: "You are the softest, safest place for all three of us to hide. I love you."

Dax Shepard is killing it on the podcast scene.

Dax's podcast, Armchair Expert only began in 2018 but in the space of year Dax has made over a hundred episodes and has had an array of exciting guests. Anyone who's anyone has been on, from Ethan Hawke to Lena Dunham and the show is a smash hit.

Kristen has recently wrapped up filming The Good Place.

The hit NBC show that was picked up by Netflix ran for four seasons and has kept Bell very busy since 2016.

So we can excuse them forgetting their anniversary, right?

According to Bell, both herself and Dax only realized it was their anniversary when family and friends reminded them. Posting on Instagram about their mistake, Bell put it down to just how happy they are.  She said: "We have been living the celebration of our commitment every moment since. I find when you are living with gratitude each moment, the dates become irrelevant."

They did manage to squeeze in a celebratory snog.

Dax and Kristen realized it was their anniversary just as they were walking out the front door. On realizing the special day, they decided to have a cheeky smooch. Aww, you guys. Continue scrolling to read twenty reasons why Kristen and Dax are smashing it as parents...