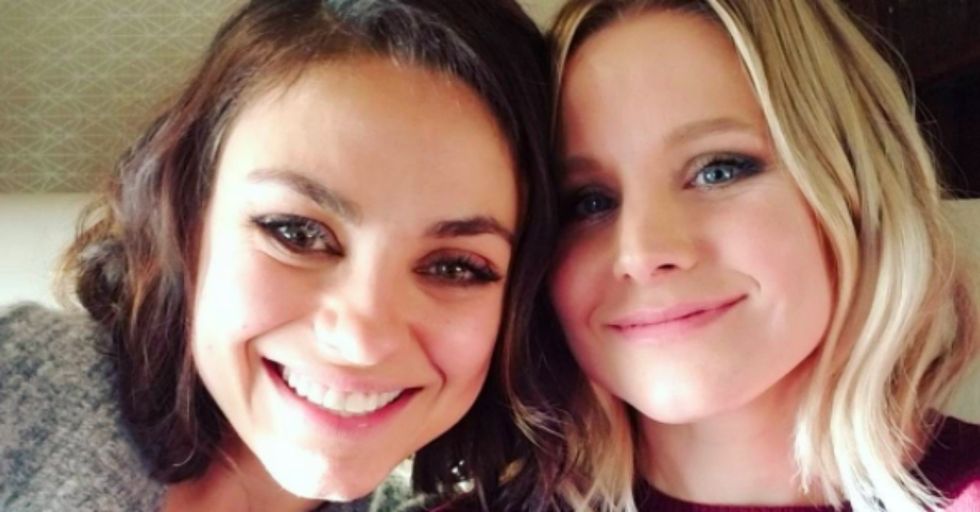 Kristen Bell and Mila Kunis have a real-life friendship that could make even the best of BFFs a little jelly. And now, they've just realized they have even more in common — they both, at separate times, waited to get married for the same very important reason. Honestly, these two are too much. When they're not getting matching friendship haircuts, they're being super cool, utterly likable socially responsible members of society.

Kristen Bell and Mila Kunis starred together in Forgetting Sarah Marshall way back in the day, but it was their movie Bad Moms with Kathryn Hahn that shot their beautiful friendship into the stratosphere.

Since Bad Moms, and in anticipation of A Bad Moms Christmas, the two have been inseparable. So inseparable, in fact, that they were interviewed together for PrideSource, a publication that focuses on LGBTQ issues.

It was in this interview that they discovered that they both — separately — decided they weren't going to get married until gay marriage was legal in the United States.

Bell has always been open about the fact that she wouldn't marry Dax Shepard until all of their friends could get married too. "It just felt gross," she told PrideSource. "What are we gonna do? Have a party and be like, 'Look at us celebrating this thing you can't do?'"

"When I was 14, I told my parents I'm never getting married," she said. "It just didn't feel equal, so why would I? I just didn't feel like it made sense to me because my friends couldn't do it, and I found nothing wrong with what they wanted. So, I was like, 'Well, then it's not sacred, then it's not what it's supposed to be, so I don't want it." Kunis said she found out marriage equality passed in the U.S. while she was suspended 35 feet in the air in London, shooting a movie. She started "bawling." That's when her now-husband, Ashton Kutcher, texted her the question, "Now what?" "OK," she replied.

Bell wasn't aware before the PrideSource interview that Mila Kunis wouldn't get married for the same reason she wouldn't.

But it makes sense because they are two bright beautiful gems who bring sunshine into this world and make everything better.