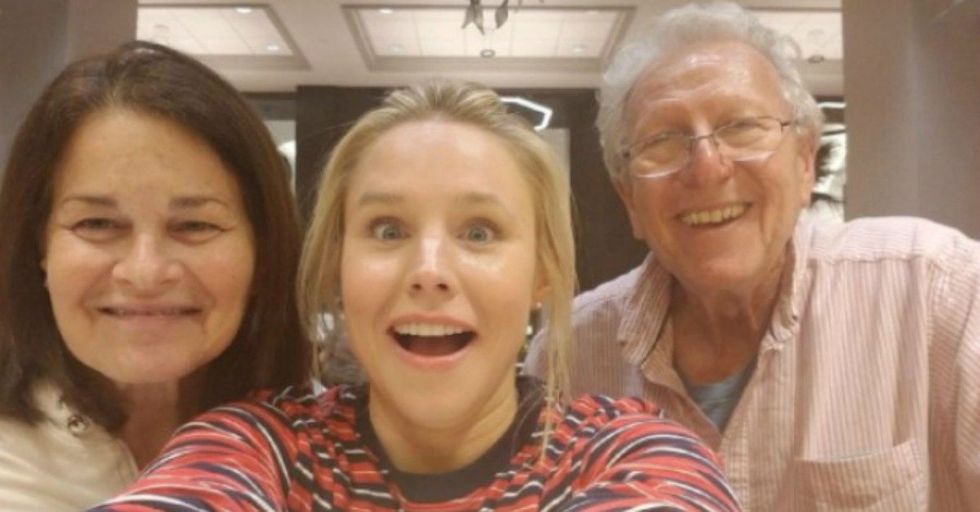 Kristen Bell is a gem.

The actress, who you might know from Veronica Mars, Forgetting Sarah Marshall or Frozen, is a delightful angel who brings rainbows with her wherever she goes.

So it seemed a little bit like fate when Bell got stuck in Florida last week in the days leading up to Hurricane Irma. As always, Bell took it like a champ, made the best of her situation, and spread goodwill and cheer during a difficult time.

In addition to being a lovely actress, great mom, and hilarious woman, Kristen Bell is always supporting great causes.

She's an avid activist for numerous awesome organizations that help people (and animals!) in different ways.

Her Instagram bio reads, "be kind. do good. spread joy."

And that's exactly what she does. Here, Bell is pictured here working with @pathpartners to end homelessness for families in California.

Bell has also done a lot of work to end the stigma surrounding mental illness.

She's been extremely honest about her struggles with depression and anxiety and urges other to open up about their experiences and get help.

The woman is a force to be reckoned with.

It's so encouraging to see someone use their power and influence to spread such good and kindness.

Plus, she has the cutest relationship with her husband, Dax Shepard.

Kristen Bell is major #goals in pretty much every area of her life. After getting stuck in Florida on the eve of Hurricane Irma, Bell decided she'd make the best of a harrowing situation. And then she ended up saving lives...

"Last run to the store for #Irma hurricane holdover prep while bracing down in Orlando — we didn't have the option to leave so here we are. Just doing our best and trying to stay positive but cautious, and trying to help those who need help prepping," she wrote. Already, she was witnessing the good that the hurricane was bringing out in people.

That same day, Bell's Frozen costar, Josh Gad, posted this photo along with the story of how Kristen Bell actually saved his parents from Hurricane Irma.

"So @kristenanniebell literally saved my parents and my entire family tonight from #hurricaneirma," he wrote. "When they were stranded in Florida, she got them a hotel room at her hotel in Orlando and saved them, my brothers, my sister-in-law and niece [sic] and nephew. They don't make them like this girl. Thank you Kristin [sic]. You are truly an angel sent from above."

But she was just getting started!

The next day, actress Jennifer Carpenter (Dexter) tweeted that Bell had found a way out of harm's way for her grandma and her aunt, who were going to try and tough it out in their closet wearing bike helmets.

On Sunday, September 10, Bell visited a shelter and sang for the hurricane victims who were there.

In an interview with CBS Sacramento, Bell also said that she was stuck in a hotel with a film crew and that they volunteered their services. "If we need to deliver toilet paper and water to people's rooms, we're ready to be on staff," she said.

The video of Kristen Bell after singing her song from Frozen will warm your heart for days.

She really did all she could to lift people's spirits and brighten their day. But she wasn't done yet. This next part of the story is the actual best.

On the 10th, Bell posted about how a few thousand senior residents were evacuated to the hotel where she was staying.

So Bell jumped right in and decided to help entertain them! "We are gonna make lemonade outta Irma as best we can and I'm fueling up the only way I know how in order to call a few hours of BINGO!" she wrote.

Kristen Bell hanging out with a bunch of senior citizens is pretty much the greatest thing.

She's been documenting her Irma experience on Instagram, and it's all incredibly touching, funny, and warm.

Also, she met John, and now they're soulmates.

Their duet will make your smile so big it'll hurt. From saving families to singing for people in a shelter to having fun with senior citizens, Kristen Bell turned Hurricane Irma into a chance to make others happy. She truly has a gift.