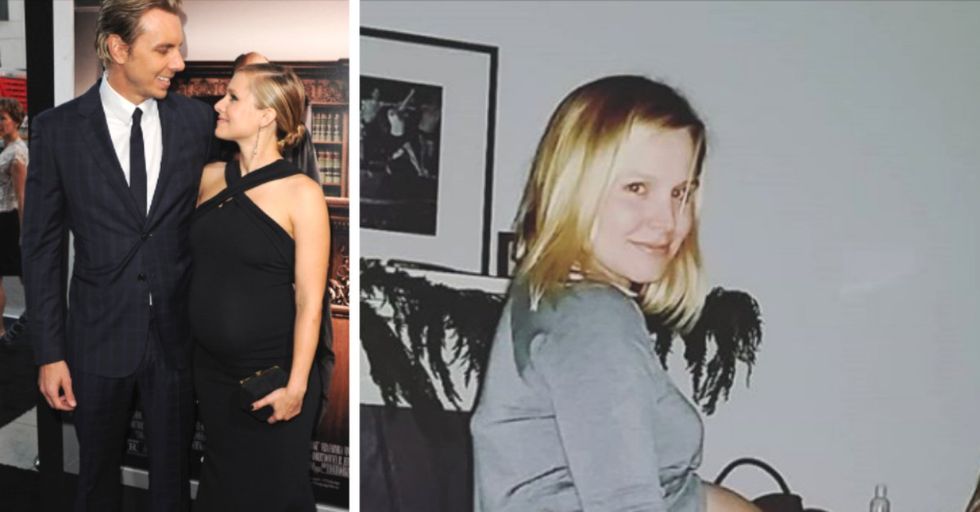 In a year that's been plagued with all kinds of bad stuff, Kristen Bell has been a beacon of light and love and goodness on the Internet. There have been so many times just in the past year that we've wished that she was our best friend. She's hilarious and lovely, and just seems like an all-around good person, and — well, you get the idea. She's great.

This week, she shared some never-before-seen pictures from when she was pregnant with her second daughter Delta. We kinda can't handle this level of feels.

Kristen Bell is baaaaasically our favorite person on the planet.

When she's not serenading elderly people stranded by a hurricane, she's getting matching haircuts with her BFF Mila Kunis. That's just the kind of awesome person she is.

This week on social media, Bell has been taking her followers on a few walks down memory lane. First, she posted these photos of her in various theater costumes:

This was to promote the TV series Encore! which reunites former high school theater kids and gives them the chance to reprise their roles from high school musicals. Bell is the executive producer of the show.

We'd be remiss if we didn't single out this photo of Kristen Bell in a banana costume.

She played a banana in Raggedy Ann and Andy. Apparently, the banana had no lines. Honestly, we'd give pretty much anything to hear Kristen Bell speak while dressed in a banana costume. (Maybe we'll get our wish in a later episode of Encore!)

But Bell's flashbacks weren't limited to her illustrious theater career.

She also shared a few personal family photos this week featuring both her and her husband, Dax Shepard. We can't believe we haven't yet mentioned how awesome Dax Shepard also is. It's just too perfect that these two found each other. They are seriously 100 percent #CoupleGoals.

Back in May of this year, Bell shared the following photo of her and Dax preparing for the birth of their first daughter, Lincoln.

Lincoln Bell Delta was born on March 28, 2013. This week, Bell also shared some photos from the birth of the couple's second daughter, Delta. And they are absolutely phenomenal!

Bell posted the pictures in celebration of her daughter's third birthday.

Delta Bell Shepard was born on December 19, 2014. (Can we also just take a quick sec to fawn over the fact that both Lincoln and Delta have "Bell" for their middle name?)

Bell is also sporting the #meshpanties she mentioned in her IG caption. (Side note: When are they going to invent better hospital underwear?! Surely they'd have come up with something a bit more stylish by now, right?)

And here's Bell "swinging from the IV pole":

We love pretty much everything about this photo. Including the sweater that she's wearing on only one arm. Hey, when you're in labor, you get to half-wear a sweater and no one can tell you not to!

After 36 hours of labor (!!!), Delta Bell was born and the Bell-Shepards became a family of four. In her caption, Bell refers to Delta as "a girl I love more than all the molecules in all the world." Is it possible for Kristen Bell to be our best friend and our mom? Is that weird? 'Cause that's kinda what we want.

Anyway, we're loving these pictures about as much as Kristen Bell loves sloths.

And that's a lot. Thanks for giving us this glimpse into your parenting life, Kristen! Seems like you've got this whole "mom" thing figured out.