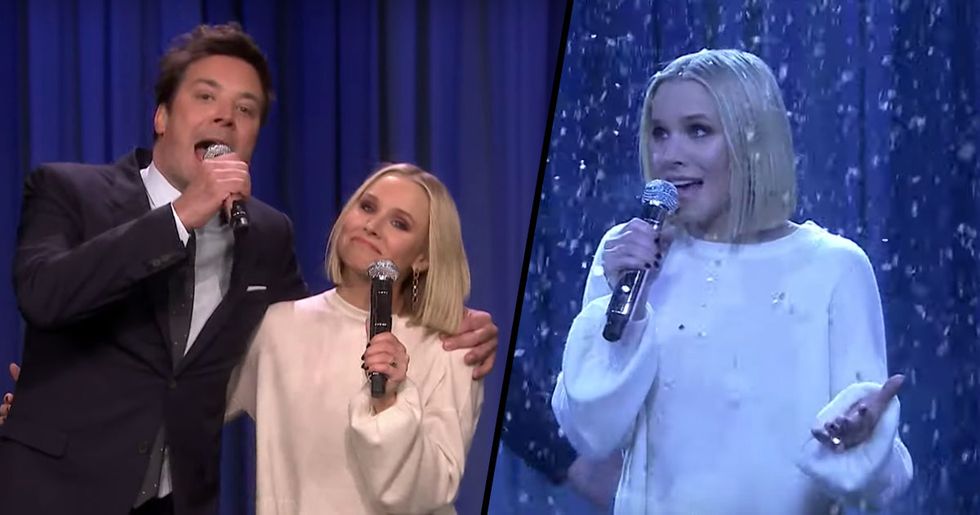 Kristen Bell really can turn her hand to anything.

In this epic throwback, Bell reminds us of some of the greatest Disney songs of all time.

Singing seventeen seconds of seventeen hit Disney numbers, Fallon and Bell made me want to purchase Disney+  right away.

Continue scrolling to see which songs made the cut and to watch the magical video.

Bell proved she is just as musically gifted as her Frozen co-star, Idina Menzel with this knockout performance.

With the help of Jimmy Fallon...

This duo took us on a magical Disney journey with a medley of the greatest Disney songs of all time.

When you wish upon a star...

The first song Bell belted out was the Pinnochio (1940) classic "When You Wish Upon A Star."

Originally it was sung by Cliff Edwards.

Edwards has starred in a number of Disney classics... he voiced Timothy Mouse in Dumbo (1941).

Edwards voiced Jiminy Cricket in Pinocchio and sung the memorable "When You Wish Upon A Star."

Next up in Bell and Fallon's medley was the Mary Poppins (1964) anthem, "Supercalifragilisticexpialidocious."

Andrews also bagged a Golden Globe for the role. I mean, fair play. It is incredibly difficult to say "Supercalifragilisticexpialidocious."

Next Bell and Fallon transported us back to 1937 and The Snow White and the Seven Dwarves classic tune "Heigh-Ho."

I feel you Sleepy...

I don't know what those dwarves put in their coffee but "Heigh-Ho," is definitely a track for people that love getting up and going to work every morning.

Look for the bare necessities...

I love this one! "The Bare Necessities" was originally written by Terry Gilkyson and performed by Phil Harris, as Baloo, and Bruce Reitherman, as Mowgli in The Jungle Book (1967).

Did you catch the live-action remake?

Like most of the live-action Disney movies that have been churned out over the last few years, The Jungle Book (2016) was a flop. Bill Murray voicing Baloo couldn't even save this picture. I guess the reality of a young boy hanging out with a wild bear isn't as cheery as it seemed in the animated version.

Is this number from The Little Mermaid (1989) the most popular Disney song of all time? It was written by songwriter, Howard Ashman and won the Oscar for Best Original song at the 1990 ceremony.

It was sung by Samuel E. Wright.

Sticking with The Little Mermaid songs...

Bell next dived into Ariel's solo, "I Wanna Be Where The People Are."

It was originally sung by Jodi Benson.

Written for the 1992 classic animation version of Aladdin, "A Whole New World," is probably the most romantic Disney song ever. Many a wedding has probably had this track on the playlist.

Shall we even talk about the recent Aladdin adaptation?

I think of all the live-action Disney adaptations, the 2019 Alladin live-action remake will go down in history for being absolute garbage. I mean...look what they did to Will Smith!

The Beauty and The Beast(2017) live-action was actually okay.

I can whinge about live-action Disney remakes till the cows come home but in fairness, Emma Watson's 2017 Beauty and The Beast adaptation did really well.  This movie made over a billion dollars in the box office.

Beauty and The Beast (the song).

This classic Disney tune was recorded twice for the 1991 movie. First with the original cast and then with Canadian pop-star Celine Dion. Both versions were popular and the song bagged both the Golden Globe and Academy Award for Best Original Song.

"Can You Feel The Love Tonight..."

Elton John wrote this memorable Lion King anthem and is one of those Disney songs that gets people all soppy emotional.

"Do you wanna build a snowman?"

In the first nod to Bell's Frozen (2013) legacy, the medley breaks into the opening verses of "Do You Want to Build a Snowman?"

Everyone's favorite Toy Story hit came up next, with Bell and Fallon getting close and singing the 1995 ballad about friendship.

Newman is a popular music composer for Disney and has written the score to an impressive 9 Disney/ Pixar movies. You'll have heard Newman's work in Toy Story, A Bug's Life, Toy Story 2, Monsters, Inc., Cars, Toy Story 3, Monsters University, Cars 3, Toy Story 4, The Princess and the Frog and James and the Giant Peach.

Do you remember the song "Remember Me," from the more recent Disney movie Coco (2017)? Well, Kristen Bell and Jimmy Fallon remembered it...

They played homage to Coco with a quick costume change...

If you hadn't remembered the song before this reference should jog your memories.

In the second nod to the Frozen movies, Bell and Fallon sang some lines from the Frozen 2 hit "Into The Unknown."

Idina Menzel sings most of the Frozen hits...

I'd say after this performance, Kristen Bell has proved she could give her a serious run for her money.

After Bell's knockout performance on The Jimmy Fallon Show, I'd expect nothing less.

Watch the full performance below...

I mean isn't Kristen Bell just the most amazing person ever? Continue scrolling to read all about how she and husband Dax Shepard completely forgot about their wedding anniversary.