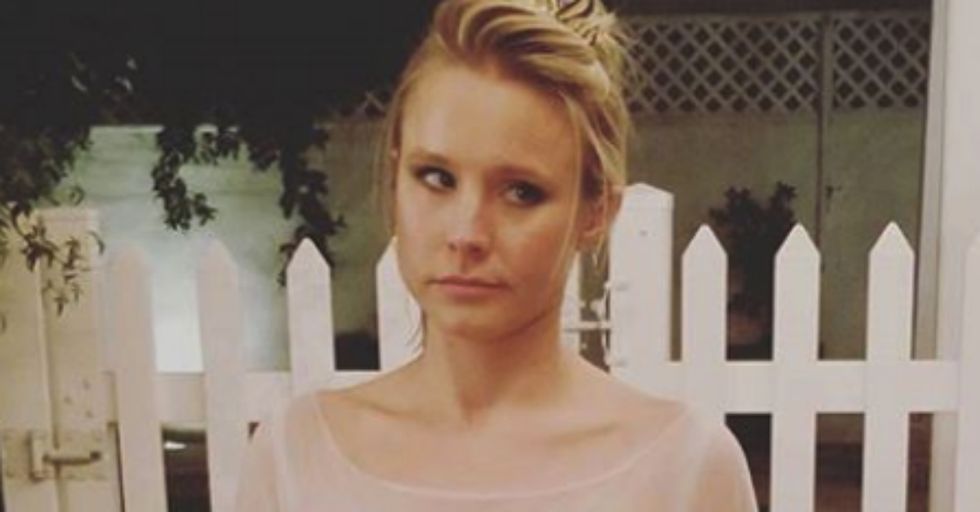 Kristen Bell has definitely become one of our favorite people on the whole dang planet. Whether she's singing to hurricane victims or getting matching bestie haircuts with Mila Kunis, she can basically do no wrong ever — which is pretty impressive for someone who may actually belong in the Bad Place.

This past weekend, Bell asked one of her daughters what she should be for Halloween. Her daughter answered that Bell should be a Disney princess... but it's probably not the one you're thinking.

Kristen Bell is basically a real life Disney princess — in more ways than one.

Have you seen her cry over her love of sloths? That is some Snow White-level connection with animals if we've ever seen it.

So it was only natural that she'd eventually be cast as a Disney princess in a movie. Bell voiced the character of Princess Anna from Frozen, the film that charmed children all over the world (and is still driving their parents nuts).

When it came time to figure out a Halloween costume, you'd think it would be an easy decision, right? Princess Anna was the obvious choice. Unfortunately for Bell, her kids aren't exactly huge fans of Anna. Her daughter did want her to be a princess from Frozen...

But there was a catch.

She wanted Bell to be Elsa. Not Anna. Bell posted a photo of her in the Elsa costume on Instagram saying that her daughter had insisted that the two of them both dress up as Elsa this year. Poor Anna! Forever living in the shadow of her older, icier, Let it Go-ier sister.

Way to take one for the team, mom!

And hey, at least you didn't have to dress up as Sven, right? Although if anyone could pull off a moose costume, you know she'd be the one to do it.