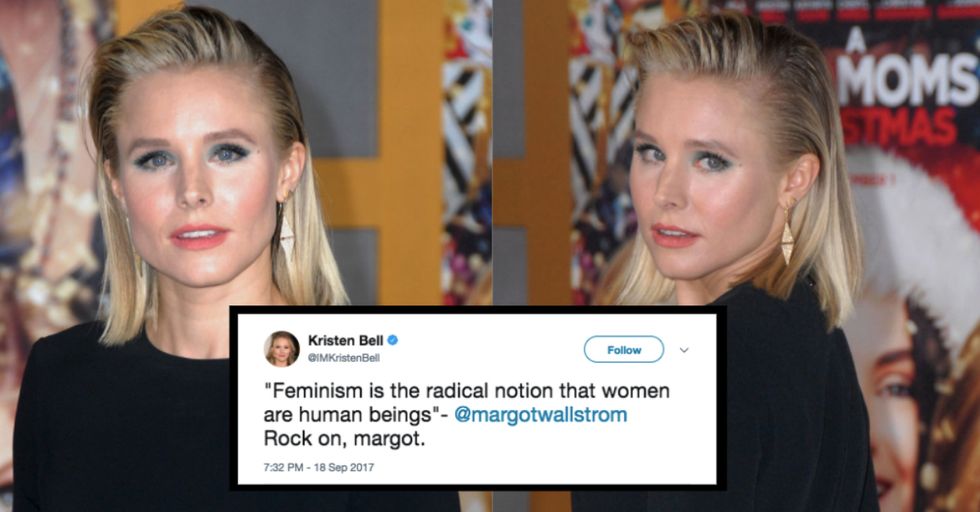 Navigating the complex maze that is new parenthood is a daunting task. While seasoned parents have a few years of experience under their belts, moms and dads who've just taken their first baby home from the hospital have to learn the ropes of sleep schedules and swaddling.

Oh, and that Everest known as "How am I supposed to feed this baby?" Let's not forget about that.

No one knows this better than superstar Kristen Bell. Besides juggling a full-time career, the busy actress is mom to two adorable kids. Recently, she talked to Ellen DeGeneres about her breastfeeding trials, and the resulting story was hilarious.

Every new mom knows the struggles of trying to figure out a first baby.

In those first days, it's easy for a new parent to feel like a fish trying to ride a bicycle. An infant is a joy, but also a tiny human filled with a lot of mystery. Sleeping mysteries. Diaper mysteries. Figuring-out-how-to-make-coffee-while-holding-a-baby mysteries. It's all fresh and a little confusing. Time works everything out, but there is a bit of a learning curve.

Strangers, parents, and random people you run into at the hospital all want to know: exactly how are you going to feed that first baby? It seems like something best left to a new mom's discretion, but people have a lot of different opinions on how feeding newborns. Sleep-deprived moms can only do their best not to throw things when they get asked this question, over and over and over.

If bottle-feeding is the right thing, the process is pretty straightforward.

For some babies, bottle-feeding with formula is the way to go. For a fussy eater who won't do it any other way, shaking up some Enfamil and rocking that snuggle bunny is a great plan. It's also awesome when it comes to trying to keep up with feeding twins. Moms who can enlist other people to help with feeding in order to sneak in a few precious hours of beauty sleep — they have it made.

Breastfeeding is another road entirely.

Breastfeeding is another way to go. It's great and natural and all of that, but there's no denying that the labor-intensive aspect of keeping up with nature's milk source is taxing. Producing milk, pumping milk, and trying, for the love of all that's holy, to store enough bottles so that family and friends can help out with feeding time is a challenge for even the most dedicated new mothers.

Breastfeeding also comes with the particular problem of figuring out where and when to do it.

Committing to breastfeeding seems easy, especially compared to navigating the logistics of doing it out in the real world. Some people don't want to see it. Some people think it's great. And others just don't care, as long as there's a nursing cover involved. It's no wonder then that taking this process into the workplace is more than a little stressful for a new mom. For Kristen Bell, this was a complicated issue...

Actress Kristen Bell is a mom who knows the workplace-feeding struggle all too well.

With credits in Veronica Mars and Frozen, Bell is one of the hardest-working moms in Hollywood. On top of making big-budget productions, she's also the proud mom of two little girls, Lincoln and Delta. Along with her Bad Moms co-star Mila Kunis, she recently appeared on Ellen and regaled the delighted crowd with her own hilarious story of breastfeeding in the workplace.

In the interview with Ellen, what starts as a simple question about the the duo's friendship soon turns into Kunis and Bell going back and forth about Bell's workplace predicament. Because Bell had just given birth to her daughter, she had to Skype into rehearsals for Bad Moms. This also meant that she had to sneak in her baby duties during the online meetings.

This led to some "technical" difficulties.

The urge to pump waits for no one, so while she was on Skype, Bell went ahead and hooked herself up to her breast pump and did what she needed to do. But, apparently, the noises the pump was making threw everyone on the call off. Only being able to see her face, no one knew what Bell was doing off camera. And because of the strange sounds, some of the guys on the call even thought Skype was malfunctioning.

But even when you try to use subtlety, it doesn't mean it'll work out.

Bell did her absolute best to multitask and keep her feeding discrete, but, little did she know, the entire ordeal was being broadcast. While the actress thought she was simply communicating with her colleagues on a tiny laptop screen, things were actually showing up larger than life on the other end of the call. "I didn't realize I was on a 200-inch screen, on speakers in a conference room. I thought it was someone's computer," she says.

Good friends can help save the day.

When Bell's friends and co-stars finally figured out what was going on, they were quick to try and gloss over the situation as best they could. Moms generally have other moms' backs, especially when it comes to wacky breast pump situations, and these ladies were no exception. Bell says, "Mila and Kathryn [Hahn] were like, 'It's fine! She's fine! Let's just keep rehearsing!' They were covering for me." Good friends, on and off the screen, are priceless.

In the laugh-out-loud clip, Bell recounts her embarrassing tale.

The full video is hilarious and will have moms in the same breastfeeding boat nodding along. It's definitely worth a watch to grab a few laughs and cringe along with the actress. Bell shows that being a working mom isn't easy, but with a little humor, weathering those first challenging days is totally possible. We'll just thank our lucky stars that we haven't had to pump while on a projector (yet). Thanks for taking one for the team, Kristen!