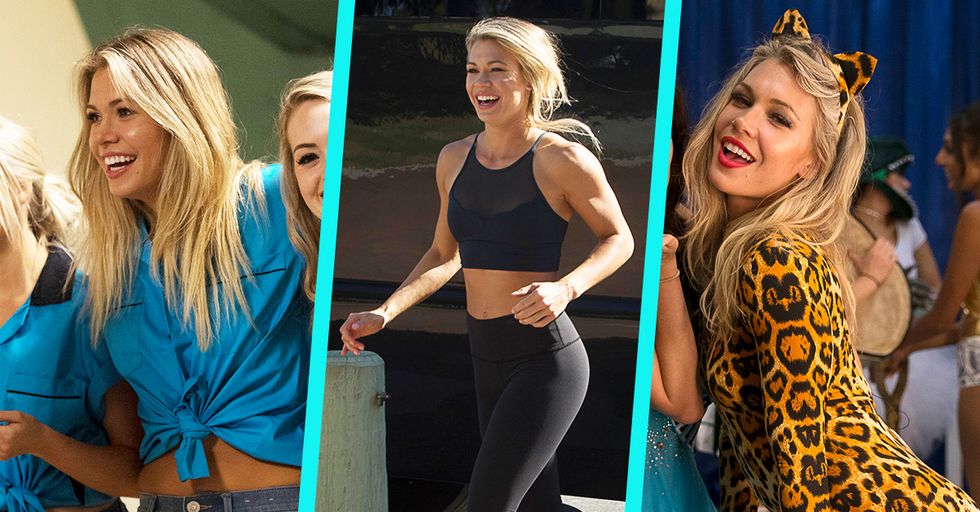 If Fort Lauderdale and bowling alleys are the most exciting places The Bachelor can bear to take us this week, then MY GOD, we need some drama. And Krystal is just the unhinged lunatic to deliver it. While Krystal’s purpose on the show is primarily to drive her cast mates to star in their very own episode of Snapped, her purpose for the viewing audience at home is to provide us with something to tweet about.

Here’s why we need Krystal’s special brand of Krazy in our lives.

Chelsea gets the first one on one date, then pretends like she’s Kate Winslet on a rented yacht.

Chelsea is so “ess-tatic" that she’s started speaking in the third person about herself. “He’s gonna get to know the real Chelsea," she smiles. Her ess-tatic state also causes her to create spontaneous poetry: “I’m on a dreamboat, but I’m also with a dreamboat." Arie is not as much of a dreamboat as Leo DeCaprio, it appears, because he doesn’t quite know how to handle the mandatory I’m king of the world! moment. Oh well.

At dinner, Chelsea opens up to Arie about her ex dumping her.

Whoever is pouring this kind of glass of wine is MY TYPE OF PERSON. #TheBachelor https://t.co/q6nllUjlBT
— Taylor Dukes (@Taylor Dukes)1517275715.0

“I was drowning in a life that seemed perfect," Chelsea tells Arie over wine. Her ex was old and controlling, so they separated 7 years into their relationship when their son Sammy was only 6 months old. Worse yet, she got kicked to the curb with trash bags, much like Annaleise did last week. Savage. Now Chelsea says she’d be happy with Arie even if he didn’t have a rented yacht. So she gets the rose. She thinks, “This rose right here means Arie is accepting me for me." We are all suddenly caught in a “moment of weakness" as an unknown artist croons these lyrics while Arie mauls Chelsea on the dance floor.

Krystal is sick of fighting these thirsty chicks for Arie’s time, but she’ll have to do just that - at a bowling alley.

On the bowling alley group date, teams are formed, then Krystal leads them in a prayer-croak. The team who wins will spend time with Arie, who likely brought his own ball tonight. Team blue for the win! Krystal gloats, then forces everyone to group hug. Afterward, Arie feels guilty so he invites the pink team to come along too. Krystal’s Krazy grows thrice the size of its former self. She loses her mind on the bus ride home, calling Arie  a liar and swearing she’ll never trust him again. “We saw the crazy in her eye" the girls say. But they're actually excited to tell Arie about Krystal's epic meltdown, which will make them look sane in comparison.

Krystal sulks upstairs in a bathrobe, thus scoring a one on one date with Arie by way of a hissy fit. Genius.

Krystal tells the group she's not going to dinner and has even packed her bags to go home. Harrrumph! Arie goes to check on Krystal because… of course he does. Maquel can’t believe her grandpa literally died, yet Arie cares more about Krystal’s meltdown than even giving her a Duggar-style side hug. Upstairs, Krystal tells Arie that she’s been “venerable" and raw (yay - she got “raw" right!), but Arie doesn’t like this particular level of crazy. “Are you teaching me a lesson?" he wonders. In the end, Papa Arie tells Krystal to stay in her room and think about what she’s done. No Snapchat for a week, young lady!

Arie has nothing to fight about with the rest of the women, so he just resorts to kissing them.

Back in group, Arie starts pulling women aside for a speed round of make-out sessions. Question: If one person in this crew gets the flu, will this entire show need to be shut down within 36 hours? Because Arie will be patient zero. Arie loves Kendall’s quirkiness. “Every day somebody surprises me," says Arie, who is likely surprised by whatever cardigan his mom lays out for him on Tuesdays. Bekah M seduces Arie yet again – legs on the lap this time, which is at least a step down from straddling him. She is never – repeat NEVER – getting another nanny job again after this, so she better hope reality TV is her calling.

Becca and Arie snuggle while Krystal puts her war paint on upstairs. She busts in on the group date just in time to hear Bekah mocking her with admirable accuracy. Lauren B leaves in a huff, then cries into a large napkin. The groups leaves it to Bekah to run Krystal off while Lauren B is whisked outside. Lauren plays 21 questions with Arie, which is 20 more than he can handle. “What’s your favorite color?" begins this mensa-level conversation. And it goes downhill from there. When Lauren later gets the group rose, Becca starts to calculate the eBay resale value she can score for those Rachel Zoe gowns after she gets back home.

Tia gets the second one on one date, which is just as country as she is.

As they ride on an airboat among the gators, Tia’s more jazzed to see a turtle. Its slow roll reminds her of Arie. Then they head to a home on stilts owned by a gentleman named Darrell, who cooks for them. Since there is no closed captioning, I have no idea what this dude says, but the fried corn looks delicious. Anyway, Arie’s more interested in what Tia has to say about “frogging." Please don’t ask. Tia says she likes the simple life. Hopefully she likes the simple guys too, because if so, Arie fits her like a worn-in gator boot! At dinner, they celebrate loving “everything they know about each other." But when Tia tells Arie she’s got a doctorate degree, a look of terror registers on his face. Then he thinks about how well Tia can take care of him in his golden years (i.e: right now). Even though Arie isn't a church-going man, Tia doesn’t care. She tells him she’s falling in love with him anyway. At this news, Arie chuckles like a grandpa who’s just found a Werther’s Original in his trouser pocket. Then he hands her a rose.

Krystal fights with everyone before the rose ceremony. Which is awesome.

As if she were a walking GIF, Krystal gets drunk and immediately starts fighting with everyone before the rose ceremony. She goes for Kendall first, who just wants everyone to "be kind." She doesn’t think Arie is the person for Krystal, which are fightin’ words. Next up is Tia. Krystal knows this chick is her competition, so she stands down when Tia calls her out. Finally, Bekah is on deck with one question for her nemesis: “Why are you still here?" Shockingly, Krystal’s real voice emerges as she tries to claim how hurt she is, but Bekah shuts that shit down STAT. She’s done. So she walks out, like a boss.

But Krystal is done too! And she has fake glitter!

“I’m done!" croaks Krystal, throwing up some jazz hands for effect. “Glitter," she says. "That was glitter." (An explanation for the people in the back?) When Krystal takes Arie aside before the final rose, Arie reminds her how close they are – I mean, she’s suffered through touring his high school and watching his home movies, right? Then Krystal blames her outburst earlier on bowling alleys. Yup. It all comes back to bowling alleys! Apparently, she was raised in one by a mother who neglected her. So – she was triggered by those scary round balls?

Or was she just spooked by Arie licking them? (Because I was.)

It doesn't matter, because now Krystal wants back in the game. “This is our first fight," she coos. Arie barks back, “Well, it could be our last fight!" Alas, at the rose ceremony we find out that there will be plenty more fighting to come, because Krystal sticks around in the end, thus solidifying her breakout role on Bachelor In Paradise, where her destiny surely awaits. Arie sends home Marikh, Maquel, and Ashley, who are now free to find men outside the confines of bowling alleys and urine-drinking group dates. As she peeks out from behind her rose, Krystal smirks, “Some things are worth fighting for. Watch out ladies." Some people are worth watching on TV too, and something tells me Krystal knows it. Next week: Paris! Head over here to read last week's coverage of The Bachelor!