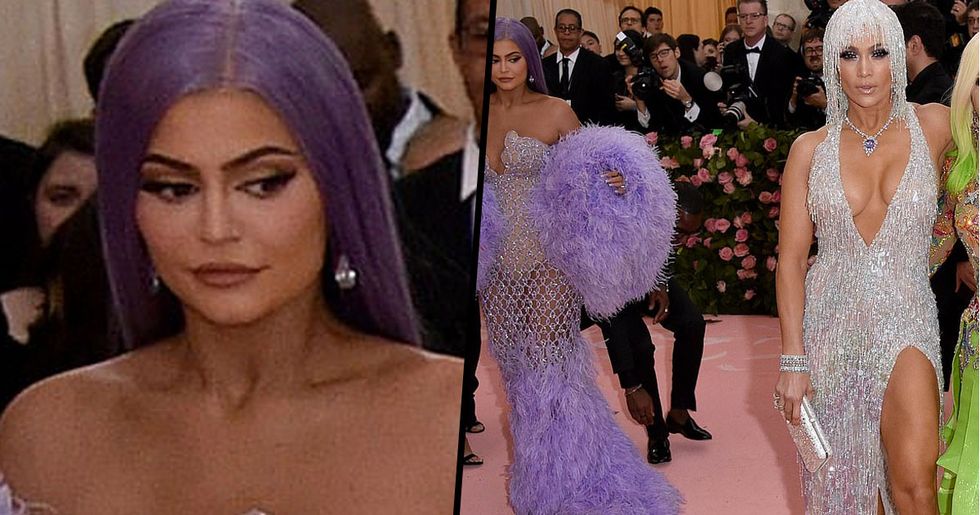 Rumor has it, Kylie Jenner and Jennifer Lopez might be having a little bad blood...

First, Kylie and her boyfriend, Travis Scott, were spotted looking bored during JLo's performance at last year's VMAs. Then a "source" claimed that Lopez's partner, Alex Rodriguez, liked one of Kylie's sexy Instagram photos, which made Jen really mad.

Both rumors have been debunked, but now Kylie has been caught acting a little weird around Jennifer on several occasions at Monday's Met Gala.

She seemed uncomfortable standing next to JLo while posing for the cameras, and then she was spotted checking out her backside.

Scroll down for the photos and the perfectly normal reason behind Kylie's awkward side-eye.

She was caught looking rather bored while Jennifer Lopez was performing on stage, Hollywood Life reports.

And she's received a lot of hate from the singer's fans for it.

Kylie was sitting with her boyfriend, rapper, Travis Scott, who also seemed to be less than interested.

One fan tweeted, "Shame on you @KylieJenner for sitting during @JLo #somadatyou when the queen is on stage."

Another one said, "As if @KylieJenner sat down throughout @JLo’s entire performance. How f**king disrespectful is that? That's f**king Jenny from the block!!"

Hollywood Life believes there must have been a good reason for it.

Maybe Kylie was exhausted from being a new mom? Or maybe she just isn't that much into JLo's music? Maybe she and Travis were going through a rough patch?

She wasn't showing much enthusiasm during Travis' performance either.

Speaking of whom, the rapper also lacked energy that night as he spent the whole time slumped in his chair, his head down, The Sun says.

While he performed, Kylie was left alone to watch his performance.

But not even his talent on stage could cheer her up. Fans were quick to spot it.

"Was it just me or did Kylie look hella awkward during Travis’s performance..." another one wrote.

After his performance, Travis was back in his seat and looked miserable again.

They didn't show much affection for each other apart from one quick peck. So maybe that night really had nothing to do with JLo and everything to do with the young couple being two tired parents? But then another controversy happened...

Soon after the VMAs, a rumor broke out about Jennifer's boyfriend, Alex Rodriguez.

According to Gossip Cop, NW magazine had spotted Alex liking one of Kylie Jenner's sexy Instagram photos which made Lopez mad.

In the photo, Kylie was wearing a tight mini-dress.

A source told NW, "This is pretty inappropriate by anyone’s standards since Alex is 43 and Kylie’s 21."

"Plus, they have no connection whatsoever to each other, except for being celebrities."

They added, "Kylie’s post was really hot, so what was going through Alex’s head when he liked it is anyone’s guess."

"Jen’s not one to put up with this type of behavior – she’s fuming."

"It doesn’t look good for their relationship when he’s lusting after a girl half his age," the source continued.

"It’s made Jen look like she’s dating a creep."

"Alex will have a hard time wriggling out of this one if you ask me!"

However, Gossip Cop says that there's no proof that Alex did actually like one of Kylie's photos.

Plus, if the rumor was true, more publications would have noticed it and it would have been all over the news.

The couple's relationship seems to be stronger than ever before.

After all, Jennifer was talking a lot about Alex on the last night of her "All I Have" residency in Las Vegas.

She told E! News at the time, "It’s been something beyond my wildest dreams to have a partner who is so supportive and loving and really, really loves what I do."

"That type of love and support that makes you soar," she added.

Later, she also told of how much she appreciates Alex coming to nearly every one of her shows.

"He really makes the effort, so do I, to be there for each other and it means a lot to me," she said.

If Jennifer and Alex are doing better than ever, what could possibly be the reason behind Kylie's side-eye stare at the singer at this year's Met Gala?

Kim Kardashian has been good friends with JLo for years. But Kylie doesn't seem to share the same admiration.

On Monday, Kylie was spotted side-eyeing the singer on several occasions.

At first, she seemed awkward and uncomfortable posing next to JLo for the cameras.

Then she was spotted checking out her backside... twice.

Lopez was posing with Donatella Versace when Kylie seemed to look back just to check out her "famous bottom," Daily Mail says.

Then she turned around completely, still keeping her eyes on JLo's booty.

Lopez was wearing a Versace gown that showed off her toned legs.

The dress was truly showstopping.

It was covered in Swarovski crystals and had a "daringly deep plunge neckline, a thigh-high split, and a matching Twenties-inspired headpiece."

She was also wearing jewellery by Harry Winston.

Daily Mail says they had been custom made for Lopez only, so you won't find them anywhere else.

But it wasn't just Kylie and Jennifer who wore Versace that night. Kendall Jenner and Donatella did too.

Donatella is now the head of Versace after her brother Gianni was murdered in Miami.

Why was Kylie checking out JLo that night?

Inquisitr suggests it most likely wasn't to admire the singer's curves...

It had more to do with Donatella Versace.

The Kardashian-Jenner family is known to adore Versace clothing and to have a close relationship with Donatella.

For instance, Kylie wore a custom-made Versace gown at the Met Gala 2017.

Her whole look, including her hair, that night was dictated by Donatella herself.

In fact, Kylie had been filmed agreeing to leave all of her dress-up decisions to Donatella.

"You guys, I just got a text. 'Can I ask you what color Kylie’s doing her hair? Donatella is asking,'" Kylie was told, according to E! News.

Kylie replied, "Say, 'Does Donatella think she should do blonde or black?'"

It seems that Donatella Versace is not only Kylie's friend but a fashion icon and idol too.

Inquisitr also says that there's no reason to believe that either Donatella or Lopez were trying to insult Kylie.

So what most likely happened is that Kylie was looking at Donatella's arm wrapped around JLo's back and felt a little jealous... But we guess we'll never know!