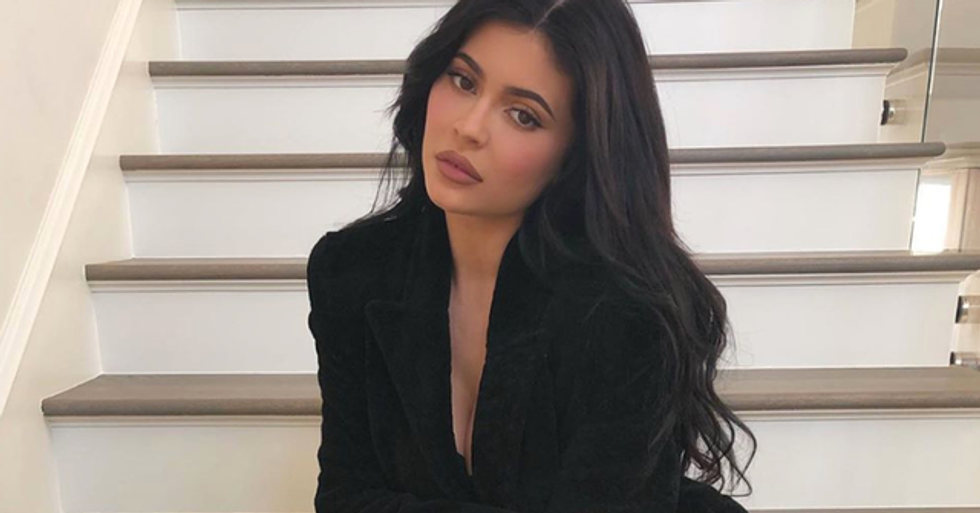 From her iconic blue tips to her shocking blonde bob, Kylie never fails to attract attention with her range of styles. But her latest look is perhaps her most surprising yet.

Kylie Jenner is one of the most famous women around today.

Alongside the integral part she plays in the incredibly popular reality show, Keeping Up with the Kardashians, she also runs a hugely successful cosmetics brand which has made her the youngest-ever self-made billionaire.

But Kylie is arguably even more famous for something else.

The world seems to have an incredible preoccupation with her appearance - not least because it's changed so much over the years.

There are a couple of reasons for this.

The primary one being the fact Kylie has pretty much always been in the public eye. Here she is in 2007 with sisters Kim and Kendall.

She's grown up in the spotlight.

Which means she's had to undergo some of the more awkward phases of adolescence directly in the public eye.

Although there's another reason Jenner's appearance is always so fascinating.

And that's because she's changed the way she looks so much over her twenty-one years. Much of this has been as a result of cosmetic procedures.

There's one, in particular, Kylie is well known for.

Her name is almost synonymous with lip fillers, which she controversially started getting in 2014 when she was just sixteen years old.

This was around the time Jenner really started experimenting with her style.

A lot of this revolved around her ever-changing hairstyles. In 2014, Jenner dyed her hair blue, which made her massively stand out from her crowd of brunette sisters.

And that was only the beginning of Jenner's hair journey.

Since 2014, she's barely had the same look for more than a couple of months at a time. She's really rocked every look imaginable.

She can switch up her vibe like no other.

We've never seen a star more successfully switch from a sophisticated brunette to a glamorous blonde to any range of alternative, trendy colors.

Jenner has given us many iconic looks over the years.

Like her 2017 Met Gala sleek blonde bob. But her latest switch-up may be her most surprising yet.

Jenner knows how to make a statement with her hair - and in spite of the many changes it's been through, a new Kylie style is always a headline grabber.

Now, let's just set the scene for her latest change.

For the whole of the summer so far, Jenner's hair has been long. Not just regular-Kardashian-style long, either - this is a length that's basically inhuman.

Look at all that hair!

Posing on a yacht earlier this month, Jenner's hair appeared to almost reach her knees.

And though the look was uber-glamorous, it wasn't to everyone's taste.

As living proof of the fact you can't please everyone, people on social media were posting about how they missed Jenner's shorter do.

And it seems Jenner has obliged.

She revealed her new hairstyle on her Instagram - a simple, understated, shoulder-length trim.

Although some people have noticed something strange.

Over the years, many have pointed out that as Kylie ages, she's looking more and more like big sister Kim. This side-by-side of them went viral last year - and it is a little bit creepy.

But some fans have criticized Kylie's new look.

Many have pointed out that Kylie's new hair is suspiciously familiar to a look rocked by Kim to her grandmother's birthday.

And while the topknot look is a little similar, we don't think Kylie is copying.

She showed off the versatility of her new look in a second post, getting rid of the topknot and opting for a deep side parting and retro hairclip.

Don't worry about the haters, Kylie!

We appreciate a girl who changes up her style!

And now Kylie has changed it up again.

With a brand new hair look that has the internet shook.

Although, as with every Kylie look ...

It's obviously had to come with plenty of speculation about the motivations behind her change.

Because yet again, people are all saying one thing.

That once again, she's looking rather suspiciously like big sis Kim Kardashian.

Yep, that's right! Kylie has gone for a lighter, caramel-colored 'do.

We love the new look!

Although, based on her track record, we're not sure how long it'll last ... Want more from Kylie? Scroll on for her incredibly extensive beauty routine.