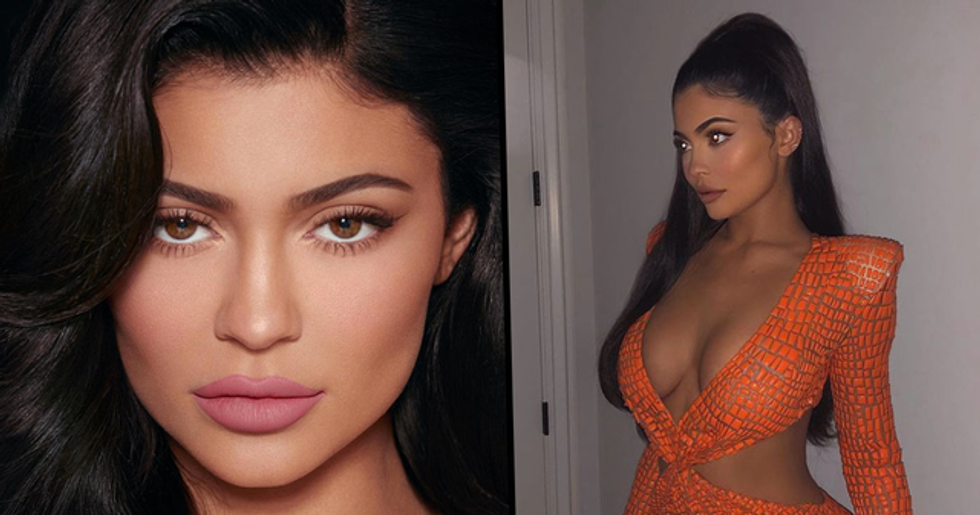 While there are certainly many strings to the Kardashian-Jenner family bow, there tends to be one sure-fire way that the sisters grab the headlines - with their looks. The family are absolutely unafraid to make a fashion statement - and more often than not, this includes baring more than a little of their bodies. Often, it's elder sister, Kim, who comes under fire for her skin-flashing looks, with many pointing to the fact that she's a mother and thus shouldn't show so much skin. But now there's another contender for the coveted award of most Kardashian-Jenner skin shown - little sister, Kylie Jenner.

For years, the young mom-of-one has pioneered trends and taken huge fashion risks - and with a one billion dollar fortune, it's safe to say that her fearlessness has paid off. But her latest look is perhaps her most controversial yet. It just takes one look to see why - and the internet clearly agrees!

The Kardashians are probably the most famous sisters on the planet.

Between the Kourtney, Khloe, and Kim, plus Kendall and Kylie Jenner, they've pretty much taken over every industry. The amount of business ventures that these sisters share is undeniably impressive.

But they're also famous for something else.

These sisters are some of the most extravagantly (and often controversially) dressed celebrities on the planet. It seems like there is nothing that these ladies won't try out.

And there tends to be one sister, in particular, who dominates the headlines.

Kim Kardashian is forever dominating news and social media with her out-there looks and risky outfits. Often, it's her more revealing looks that attract the most attention.

This look, in particular, got our attention earlier this year.

At the Hollywood Beauty Awards in February of this year, Kim rocked what was potentially her most revealing outfit yet. This vintage Thierry Mugler gown had the entire world with their jaws' dropped.

But, honestly, the whole family aren't afraid to make a statement.

Here are Kim, Kylie, and Kendall at the Met Gala this year with Jennifer Lopez. The theme was "camp" - and the Kardashian-Jenners certainly delivered.

Now, there's another Kardashian-Jenner sister whose looks are standing out more and more.

Youngest sister, Kylie Jenner, has long been recognized for her signature style and her dress sense appears to be getting more and more adventurous.

She's certainly fearless when it comes to fashion.

But as you may expect when trying to make a statement with clothing, she has just as many haters as she does fans. Some of Kylie's looks are a little too much for some people.

Often, she goes for a pretty extravagant vibe.

Kylie is clearly a fan of glamour, as her penchant for a beaded gown can tell you. If there's an opportunity to be dripping in jewels, Kylie will take it.

In fact, this is a pretty signature Kylie look.

She enjoys a slightly-naked-but-covered-in-gemstones moment - and we can't deny, she looks good doing it.

But we can't lie, this look isn't for everyone. And for the vast majority of us, life just doesn't present the sort of occasion to wear such an intense look.

This coordinating top and skirt seem to be made pretty much entirely out of tassels and plastic beads, which is a brave choice on Kylie's part.

Although she's not always about full glam.

Kylie also has a surprisingly good sense of humor when it comes to her looks - take this comedically oversized padded jacket, for example.

Often she'll go for something a little more casual.

But she'll always give things that signature Kylie twist, adding a hint of polish to the most casual of outfits. Take this oversized tee/thigh-high purple boots combination, for example.

But it's clear that she's not afraid to try something new.

She loves to dress up a simple t-shirt.

You wouldn't think that a baggy basic could be quite so high fashion, but by adding an olive green corset and some of her signature boots, she makes it work.

This one in particular looks absolutely excruciating - a tiny, metal loop that appears to have a vice-like grip around her poor waist.

But there's one thing in particular that makes Kylie's style so eye-catching.

She's absolutely unafraid of flashing some flesh - and, in fact, she often appears in public wearing clothes that border on indecent exposure.

One signature item in Kylie's wardrobe?

She absolutely loves a pair of over-the-knee boots. And to fully rock them? Well, you have to be wearing a hemline that's high enough to see the tops of the boots - which means a micro mini.

And she'll turn any look into something skin-revealing.

For example, this "winter themed" look, which, we can all agree, wouldn't be very likely to keep anyone warm.

Even this pair of fairly loose and modest trousers have a slit down the side, complete with a diamante ladder effect.

The Y2K inspired fit combines a Louis Vuitton printed swimsuit with a matching headscarf, and she looks every inch the R&B video star.

Even fancy dress is an opporunity for Kylie to show off her bod.

This Christina Aguilera Halloween costume made the internet do a double take when she posted the snap.

Kylie is masterful at making any look seem sexy.

By adding what looks to be a lingerie set on top of this more modest, silky pantsuit, Kylie reminds us all of body-baring - even when she's actually pretty covered up.

Here, Kylie is pretty much covered from head to toe.

But, by ensuring that her look is super bodycon, she managed to pull off something revealing, even though she's in full-length sleeves and trousers.

Once again, here she is, combining modest with scandalous in a shocking way.

On the surface, this silhouette is pretty classy - a long pencil skirt. But the material that she's gone for? The loose, open mesh leaves absolutely nothing to the imagination.

You'd think that a t-shirt, sweater, and a pair of jeans would mean that Kylie looked pretty covered-up. But the length of the sweatshirt (which is basically a scarf with sleeves) combined with the skin-tight fit of her shirt and jeans makes this look surprisingly revealing.

One look last month was called her most revealing yet.

She shared a picture on Instagram of a particularly barely-there dress, and it got the entire internet talking.

It's a pretty bold look.

Not only is the dress made up almost entirely of cut-outs, but it's a neon orange shade with a pretty intense python print.

It's clear that Kylie was pleased with the effect.

She shared the image on her Instagram more than once - and this picture, in a dimmer light, really shows off the details of the garment.

And although it's not to everyone's taste, we have to respect her attitude.

Kylie loves to have fun with fashion and take some risks - and it certainly makes for a more interesting Instagram feed!

But how about something completely different?

Over the years, Jenner has received a fair amount of criticism for the way in which she's changed her appearance. She underwent invasive procedures like lip fillers at what some see as a worryingly young age.

But it's also her clothes and makeup that give Jenner her signature anything-but-natural look.

This makeup-free Kylie Jenner pic almost looks like a throwback to her teen years before the fillers, etc!… https://t.co/z88B4lPmkT
— HollywoodLife (@HollywoodLife)1561550409.0

And this week, she stepped out in a rare bare-faced moment, which proved that she's not quite as far from the "old Kylie" as her Instagram led us to believe.

Here's how she "really" looks.

Honestly, if we saw her in the street, we may walk straight past her. She looks so... normal!

Jenner was spotted in Calabasas.

She was reportedly heading out for a dentist appointment, which explains her more low-key vibe, including hair tied back, thick-framed glasses, and a suspiciously un-plumped pout.

On the very same day, Jenner shared quite a different photo on her Instagram.

Let’s get one thing straight I like #KylieJenner but damn makeup can do some magic #KUWTK https://t.co/g3JfgXoaQy
— Hidden🌸Reality (@Hidden🌸Reality)1561534554.0

The image that she chose to post was of her signature polished self - and it was quite the contrast from the candid image taken of her earlier.

For some, it's valuable proof.

Jenner is still a normal girl under all that makeup and fancy clothing, which is weirdly reassuring.

Others noticed something else about the pics.

It's true that Jenner's lips do look far smaller than her usual signature pout - but we guess that's a testament to the power of makeup!

Some made this observation.

It's certainly true that Jenner looks younger (and far more like a regular twenty-one-year-old) in this image than what her social media portrays.

Others found it strangely upsetting.

@DailyMailCeleb This broke my heart because we see how young she still is. She’s been sexualized to sell for years.
— JMH (@JMH)1561552453.0

It's almost as is she has a "job" to be Kylie Jenner - and seeing her off-duty reminds us how all-encompassing and exhausting her role must actually be.

Although this reaction was probably our favorite.

If you're worrying about the fact that you don't look like Kylie Jenner, you can rest assured - because she doesn't look like her either!